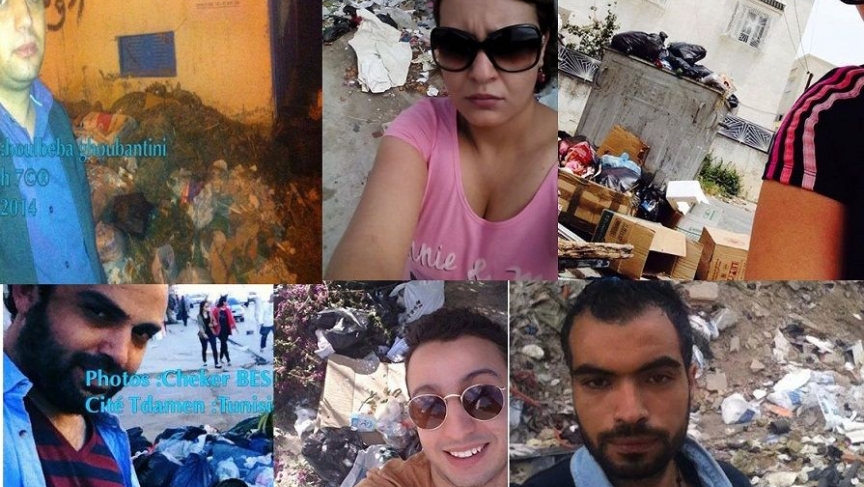 Tunisians taking selfies with trash — part of a campaign to get their streets cleaned up.

Think back to the last selfie you took.

Whatever you were showing off — a new haircut, maybe, or a palm tree you were sitting under. Either way, that selfie probably didn't include bags full of garbage — and certainly not intentionally.

But they do in Tunisia. Tunisians are using selfies to raise awareness of the country's growing waste problem. Almost 13,000 people have "liked" a Facebook page devoted to trashy selfies.

"I wanted to show another image of Tunisia," said Cheker Besbes, the journalist who started the page.

The Facebook page calls on people to "show the leaders of Tunisia the true face of our streets."

Tunisians are also posting their garbage pics to Twitter, too.

"For people who live here, you can notice that there is garbage everywhere, in all neighborhoods, from the bourgeoisie to popular places," said Tunis-based BBC correspondent Sihem Hassaini. "We have this smell. We have this disgusting landscape of garbage."

"There is also a sanitary problem [like] mosquitoes, asthma — diseases related to pollution are increasing in the country, especially in the summer time."

The government has promised to tackle the problem of trash on the streets and has even announced a special task force to focused on trash.

The government has reportedly blamed defective trash collection equipment, and an increase in the number of sick days taken by trash workers, for the problem.