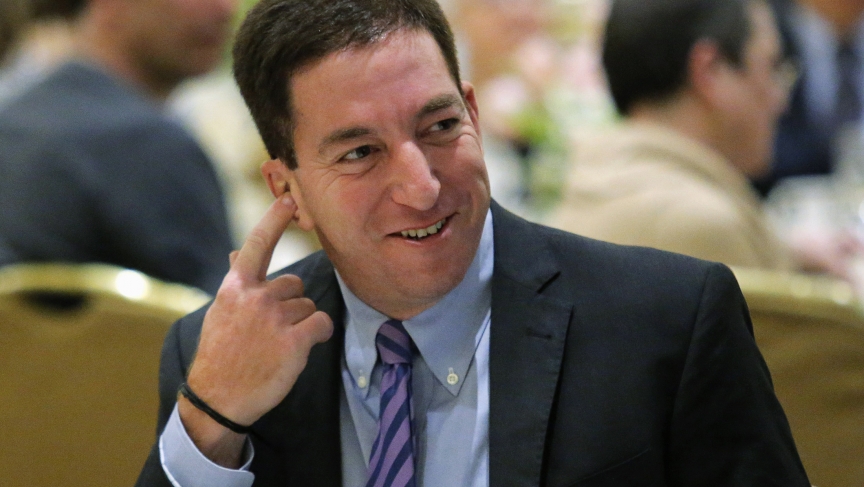 Glenn Greenwald attends the George Polk Awards in New York, April 11, 2014. Greenwald and Laura Poitras, the US journalists who reported on spy agency analyst Edward Snowden's leaks exposing mass government surveillance, returned to the United States for the first time since revealing the programs in 2013.

Whether he's a whistleblower or a traitor, Edward Snowden managed to command an audience Wednesday night in an interview with Brian Williams on NBC.

Snowden justified his actions, saying he believed himself to be a patriot working on behalf of the American people.

Among other revelations, Snowden claimed the US had trained him as a spy. He told Williams he "was trained as a spy, in sort of the traditional sense of the word, in that I lived and worked undercover, overseas, pretending to work in a job that I'm not, and even being assigned a name that was not mine."

The National Security Agency has remained silent on Snowden's latest claims, but Secretary of State John Kerry has not been so tight-lipped.

"Edward Snowden is a coward, he is a traitor and he has betrayed his country and if he wants to come home tomorrow to face the music, he can do so,” Kerry said in an interview with MSNBC.

NSA officials may soon have another Snowden bombshell to handle. Glenn Greenwald, the journalist who helped Snowden reveal his secrets, says that he plans to publish a story on the kinds of people being targeted by NSA surveillance, adding that it is "a very long list."

Greenwald, the author of "No Place to Hide: Edward Snowden, the NSA and the U.S. Surveillance State," was present in Moscow for the taping of the NBC interview. He says Snowden's confidence comes as no surprise.

"He's extremely content with the choice that he made," Greenwald says. "He feels that he can put his head on the pillow every night and know that he took action in defense of his political beliefs. That gives him a great deal of internal tranquility and peace, and I think that came through in the interview."

Many accuse the whistleblower of working for Moscow, but during his interview with NBC, Snowden claimed he has "no relationship with the Russian government at all." Greenwald says this is a tactic the US government has used before.

When Daniel Ellsberg "leaked the Pentagon Papers, the Nixon Administration and all of its allies in the media constantly told the public that he was getting paid by the Russians, that he was a Russian spy, that he was on their payroll, and that he was harming national security," Greenwald says.

When asked about Snowden's ties to Russia, Greenwald says the accusation is meant to hurt Snowden's credibility in the same way they were designed to discredit Ellsberg.

"It is the same accusatory clichés and fear mongering campaigns that they use against every whistleblower," Greenwald says. "If anybody has a shred of evidence that Edward Snowden has any relationship with the Russians like your question asked about, then they should come forward with it. He didn't choose to be in Russia, he was passing through Russia on his way to Latin America. He was forced to remain there because the US government revoked his passport and then bullied the Cubans out of giving him safe passage through to Ecuador, where he wanted to seek asylum."

Greenwald says it is "incredibly irresponsible" for anyone to believe that Snowden is working for the Russian government, because no such evidence has ever presented itself.

"He sounds like Dick Cheney talking about John Kerry in 2003," Greenwald adds. "Democrats used to get so offended when Republicans would impune their patriotism, call them traitors and raise the specter of Venezuela and Cuba and foreign countries as a means of destroying their reputation. If you look at what the Nixon Administration said about Daniel Ellsberg, or what the Bush Administration said about the whistleblowers who blew the whistle on torture in Abu Ghraib and rendition and the NSA program in 2005, they all sound exactly like John Kerry."

According to Greenwald, the anger among high-ranking officials, like Kerry, runs deep.

"Of course John Kerry is angry — anyone who wields political power hates when transparency is brought to them, and when the acts that they try to hide from the public are exposed," Greenwald says. "This whole idea of 'he helped the terrorists' — isn't this the exact rhetoric that the Bush Administration spent eight years using to demean and malign critics like John Kerry?"

Greenwald says there has yet to be concrete evidence showing anyone has been harmed by Snowden's revelations, adding that he encourages any individual with such information to come forward.

"The only things that have been harmed are the political reputation and credibility of people like John Kerry from having hidden from the American public exactly that which they ought to have known," he adds.

Though he stops short of saying that these leaks harmed the United States, Greenwald does acknowledge that these revelations have made things more complicated for the US government in global politics.

"The documents prove that the US has been engaging in industrial espionage and has been engaging in exactly the kind of economic surveillance that they've been denouncing the Chinese for engaging in," he says. "Yes, if you deceive your own citizenry by claiming that other countries engage in a certain behavior and that behavior is wrong, at exactly the same time that you yourself engage in that behavior, of course that will make things more difficult for you on the world stage."

Blaming whistleblowers or journalists for exposing the "bad acts" of the US government is counterintuitive, Greenwald adds.

"The blame lies with the people who did those bad acts, and in this case it's the US government," he says.

The State Department, the Department of Defense and House Intelligence Committee did not respond to a request to comment on Greenwald's statements.