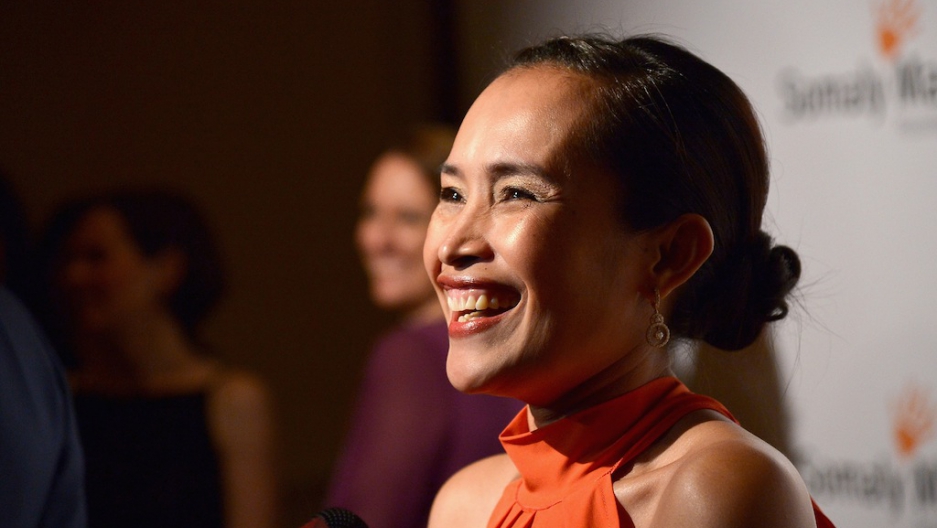 Somaly Mam attends the "Life Is Love" gala thrown by her foundation in 2013 in New York City. The activist resigned from the organization in May 2014.
Credit: Mike Coppola
Share

She was born, in her words, a “small black savage, the lowest person in the village.” She describes an adolescence marred by brothel enslavement where girls were raped, showered in maggots as punishment and casually murdered before her eyes.

Somaly Mam’s story — told in her popular memoir The Road of Lost Innocence, and recounted on Tyra Banks’ couch — is one of perseverance through extreme cruelty.

But some of her stories, and those of young women in her foundation’s care, are full of holes. Following a recent Newsweek expose on the activist’s “slippery truth,” she has resigned from her namesake Somaly Mam Foundation.

Mam has become the face of resistance against forced sex work and child prostitution amid Cambodia’s lawlessness. Her work has involved liberating, sheltering and educating young girls ensnared in forced prostitution — as well as using her celebrity to shore up attention and donations to further her crusade.

Today, she is quite likely the most famous and celebrated living Cambodian, a glamorous anti-trafficking crusader backed by Susan Sarandon, cheered on by Angelina Jolie and extolled by globetrotting New York Times columnist Nicholas D. Kristof.

In promoting her cause, she has been joined by her beneficiaries, namely young women with dark tales of captivity in brothels.

But years of investigative work by the small-but-feisty Cambodia Daily newspaper have long cast doubt on Mam’s stories. The Newsweek expose shines a brighter light on these allegations; the lead reporter for the Cambodia Daily’s investigations, Simon Marks, wrote Newsweek’s cover story.

“I saw it happening a lot,” said the former employee, who requested anonymity out of fear of retribution. “You find the most talkative person who’s also not shy around foreigners. Usually the ones who were really trafficked are so broken that they can’t really do this stuff ... they’re so psychologically damaged that they can’t do this kind of PR work.”

“You just pick a girl who’s very grateful to Somaly Mam, which is not hard,” the former employee said. “She’s the most charismatic person I’ve ever met.”

In Cambodia, decades of conflict have given way to a semblance of stability propped up by thousands of internationally funded aid organizations.

The nation’s foreign aid economy is notoriously huge — accounting for half of the national budget — and Mam has emerged as a star in a landscape where local activism can draw the global spotlight.

Suspicion surrounding Mam’s stories finally pushed her namesake foundation to hire a law firm for what it called an “extensive investigation” with “unfettered access.”

That investigation also focused on Long Pros, a young woman whose maimed face has become synonymous with the horrors of child sex slavery in Cambodia — all thanks to Mam’s promotional efforts.

Pros, who is missing her right eye, has figured heavily in Mam’s publicity. In a 2009 New York Times article, columnist Kristof reports that Pros was once a teen sex slave and that a brothel owner gouged out her eye for being disobedient.

In the PBS documentary “Half the Sky,” she embraces actress Meg Ryan, who later describes her “incredible little face with no eye — this hole in her face from saying, ‘No.’” The story has also been told on The Oprah Winfrey Show.

The Cambodia Daily, however, has reported that Pros’ eye was never gouged out in a brothel. It was instead damaged by a tumor. Their report is based on interviews with her parents and multiple eye doctors, including the surgeon who removed the tumor.

The foundation is now stating it will now remove Pros “from any affiliation with the organization ... but will help her transition into the next phase of her life.”

Mam’s profile rose sharply in 2008 following the English-language publication of her memoir.

The book contains scene after scene of gut-wrenching depravity. In most countries, such brutality would register as unimaginable.

But most countries are not as troubled as Cambodia, a Southeast Asian nation riven by Vietnam War-era American carpet bombing, the brutal Khmer Rouge communist regime and decades of ensuing poverty and lawlessness.

In her memoir, Mam describes her childhood as a jungle-dwelling orphan living in villages mired in warfare. “There were times,” she wrote, “when I would have sold my soul for a glass of milk.”

As a teenager, she wrote, she was sold to a Phnom Penh brothel and forced to sleep with drunks and amputees.

Somaly also tells of a brothel owner who tied her down and dumped maggots over her head. Later, according to her memoir, the man electrocutes her using a car battery. Later still, he ties up Mam’s closest friend and “[shoots] her brains out of her head.”

But Newsweek interviews with Mam’s childhood friends and local officials contradict much of her gruesome backstory. Pierre Legros, her former husband and the co-founder of her first charity, AFESIP, also contends that some of her horror stories are fabricated. One particularly lurid story involving their daughter’s kidnapping and rape, he said, is untrue.

Cambodia’s increasing numbers of NGOs often feel compelled to “over-represent the truth” to gain attention and donations, Legros told GlobalPost last year. “If you want to be at the top,” he said, “if you want to become more visible, to be the best ... in the NGO world, you have to shock to have big bucks and receive money.”

Even Mam, in her memoir, acknowledges her own uneasy feelings about the Western media’s appetite for salacious stories.

“Journalists make it difficult, in a way, though I am grateful to them,” she wrote. “The attention of the world’s newspapers helped save our operation from being shut down. But often reporters want a ‘sexy’ project, something hot, to wake up the readers and viewers. They ask me to talk about my past — if not, how will they convey the importance of the work we’re doing?”