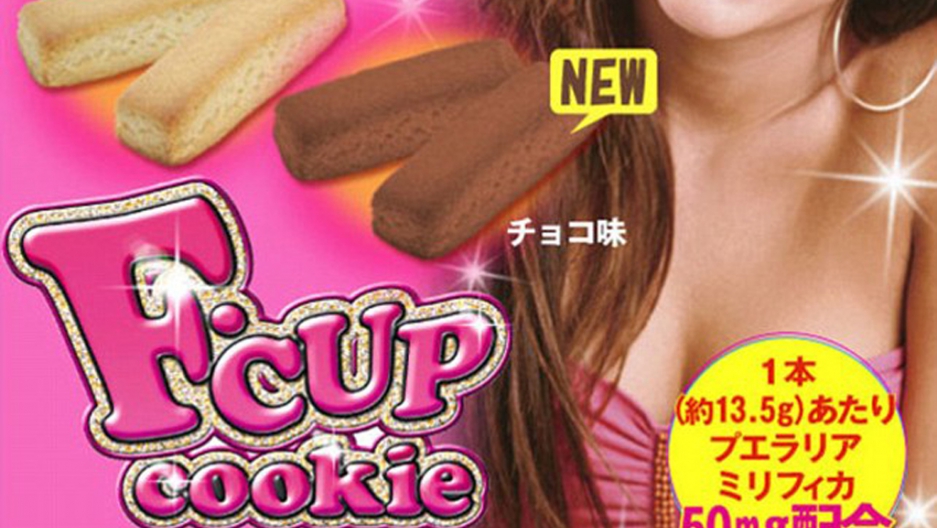 A company in Japan claims it has developed a cookie that will make your breasts grow. Offensiveness aside, it doesn't work.

Called "F-cup cookies," they feature a plant extract from Thailand called Pueraria Mirifica that contains a molecule similar to the hormone estrogen, which plays a role in breast size and development.

The cookies come in two flavors. Chocolate and pralines, seen below:

Women are supposed to eat two cookies a day to "achieve maximum results," which is okay because they are only 70 calories and swell as they absorb water, "giving you long-lasting satisfaction."

Note: They may cause "loose bowels" if eaten in excess. Also, don't eat them if you are:

D. Have some sort of medical condition related to the ovaries, uterus or breasts

Also, don't eat them because they don't work. Nutrition experts said there's no scientific evidence that this herbal extract has a similar effect to estrogen when eaten.

"Even concentrated doses haven't been shown to do anything," Ian Marber  told the Daily Mail, "although eating several biscuits can lead to weight gain and all that goes with it."

Several "experiments" eating the cookies have been posted to social media. The majority are a bust (pun intended), and this woman claims they actually shrunk her breasts: