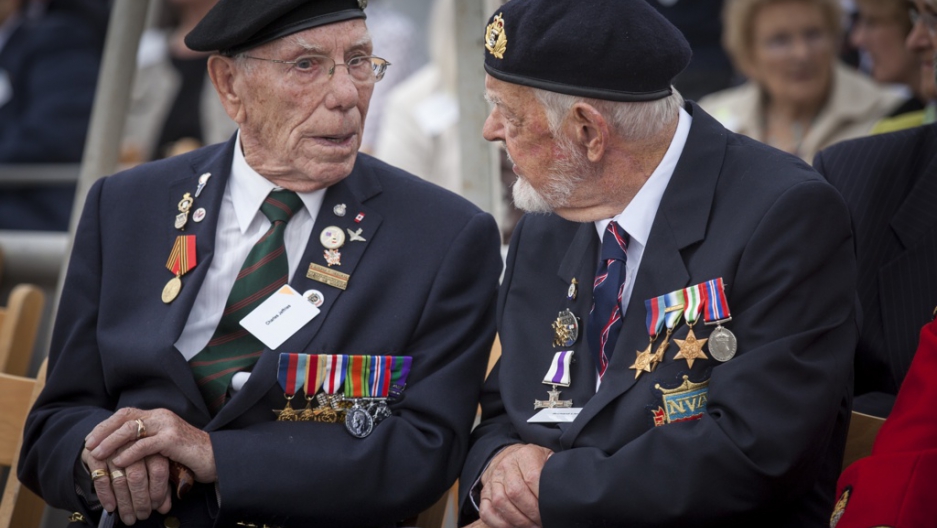 Veterans Charles Jeffries and Richard Llewellyn aboard the HMS Belfast for the 70th anniversary D-Day commemorations on May 20, 2014 in London, England.
Credit: Rob Stothard
Share
NEW YORK — Whatever one thinks of Vladimir Putin, he does not lack for moxie.

Prince Charles may be under fire for speaking candidly about the Russian leader — comparing Putin’s seizing of Crimea to tactics Adolf Hitler used before World War II. But royal candor aside, the fact is Putin has an uncanny sense of timing: He employs history, economics, propaganda and brute force in equal measure where and when its suits his purposes.

A new initiative to emerge from the Kremlin’s Ministry of Cunning Plans also harkens back to World War II — the Great Patriotic War, in Soviet parlance.

Earlier this month, Putin’s spokesman confirmed the leader had accepted an invitation from French President Francois Hollande to attend the celebrations in Normandy of the 70th anniversary of D-Day, the Allied invasion of Nazi-occupied Europe in June 1944.

Barack Obama, Hollande and British Prime Minister David Cameron will be there. Even Germany’s Chancellor Angela Merkel is going — the latest German leader to demonstrate that time has healed these wounds.

“To describe Putin as the skunk at the picnic would be an enormous understatement,” a US diplomat said.

But some wounds are fresher than others. The prospect of a photo shoot of Western leaders, veterans and widows standing side-by-side with the Russian president has thrown a wet blanket on the plans to mark the sacrifices of that day seven decades ago.

“To describe Putin as the skunk at the picnic would be an enormous understatement,” a US diplomat involved in advance work for Obama’s visit told me, requesting anonymity.

Although Moscow played no direct part in the D-Day landings, it would not be accurate to say they were irrelevant. Indeed, while thousands of US, British, Canadian, Free French and soldiers from the French and British empires poured ashore on June 6, 1944, millions of Soviet troops were in the third year of a titanic struggle against Hitler’s juggernaut on the eastern front.

From the Russian standpoint, D-Day was a few years late and a great many dollars short, an invasion put off repeatedly by the US and British while Russia battled it out with Hitler’s army.

Russian history texts stress how long it took Western powers to draw elite German forces away from the Russian front — and that many of those the Allies faced on the beaches of Normandy were substandard units or divisions already mauled by years of warfare against the Red Army.

Many Russians suspect the long delay between 1942, when US forces arrived in Europe en masse — and the D-Day invasion had a darker, more cynical motive.

Former Soviet leader Nikita Khrushchev wrote that the Western Allies “desired to put a still greater burden on the shoulders on the Soviet Union and to bleed us even more. They wanted to take advantage of the results of the war and impose their will not only on their enemy, Germany, but on their ally, the USSR.”

The Russians have a point. Starting in 1942, the Soviets were repeatedly assured that a second front in the west would open soon.

More Unraveler: This is why Nigeria’s large military is no match for violent zealots

But 1942 and 1943 came and went, and while the course of the Russian-German war began to turn in Stalin’s favor, the US and Britain decided instead to invade North Africa, then Sicily and Italy instead of France. All told, between that first assurance in 1942 and D-Day, at least 4 million Soviet troops and twice again as many civilians perished.

Putin has shown time and again that the West’s view of him is hardly a priority; indeed, he appears to bask in the role of spoiler. He may appear as a skunk to those remembering the D-Day of John Wayne and Stephen Spielberg.

But what matters to Putin is that Russian opinions are not ignored. From that standpoint, the moment is rich in political potential. He can be expected to make the most of an opportunity to turn the D-Day commemoration into Obama’s longest day, too.