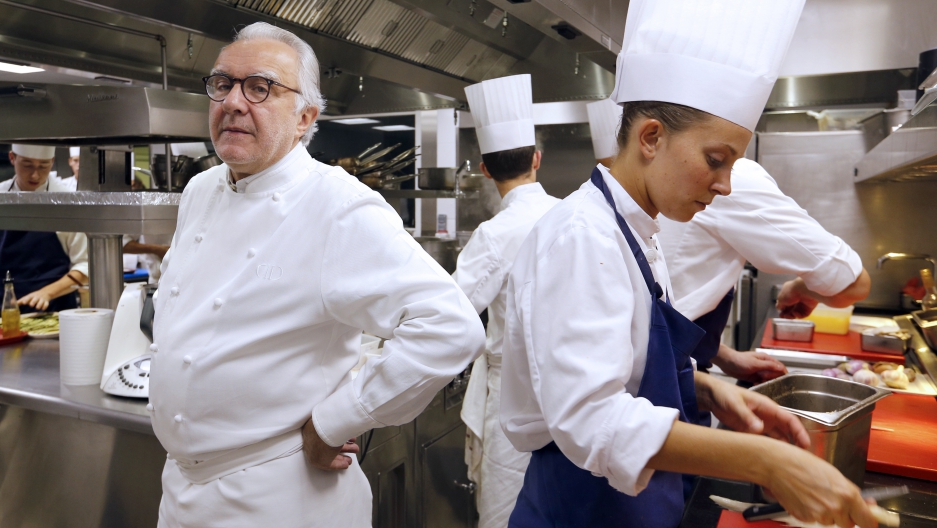 PARIS, France — Enjoying a post-dinner coffee in the Agapes bistro, it's hard to believe French cooking is in crisis.

After all, chef Frederic Naulleau has just induced a sense of deep satisfaction with a meal that began with game bird paté flavored with aged armagnac, progressed through slow-cooked cheek of Auvergne pork accompanied with lentils in a foie gras cream, and ended joyously with a lemon cremeux topped with almonds, white chocolate and caramel ice cream.

But judging from some recent headlines, French cuisine is suffering a malaise.

"Is French cuisine out of date?" asked the Bordeaux newspaper Sud-Quest. "Amid globalization, French gastronomy struggles to remain a reference point."

The spate of anxiety was triggered by last month’s announcement of the 2014 "World's 50 Best Restaurant" awards which, as the Parisian life-style magazine Obsession bemoaned, contained "only" five French establishments. None were in the top 10.

Instead, the elite ranking included three restaurants from Spain, two each from Britain and the United States, one Italian and a Brazilian. The top prize went to Denmark.

While some questioned whether French haute cuisine could still compete, others denounced the top 50 selection process as a sham concocted by an Anglo-Saxon cabal to promote their faddish foodie favorites at the expense of France's great culinary traditions.

"An obscure jury of critics, gastronomes, restaurateurs, who vote for their friends," fumed leading French food critic Gilles Pudlowski in the news weekly Le Point. "But we can have a laugh watching how this masquerade of a hit parade manages to create such waves in the press and on the web."

Like several French critics, Pudlowski delighted in recalling a reported case of food poisoning at Noma last year. He called it the "world's greatest case of the sh*ts."

Contacted by GlobalPost, he acknowledged that recent years have seen an improvement in cuisine outside France. You can now eat well in northern Europe, even in much maligned Britain, he agrees — but such places still can't really compare with France.

"France is still at the top. If you look at all the great chefs we've got here, I don't have the impression that France is lagging behind anyone," he said on the phone from Normandy.

Still, there have been other blows to France's gastronomic reputation.

Earlier this month, Sweden led a Nordic sweep at the European round of the "Bocuse d'Or" competition, considered the culinary Olympics and named for 88-year-old French uber-chef Paul Bocuse. France finished fourth behind Denmark and Norway.

Salvation, the Times suggested, was coming from a brave band of expat Brits, Americans and Aussies keeping the flame of Parisian bistro cooking alive in an archipelago of Anglo-foodie outposts.

Amid all the distasteful news, it may be surprising to find the British magazine that organizes the annual 50 Best rankings rushing to defend Gallic gastronomic supremacy.

"France is still the most influential culinary nation in the world, it has been for a long time," says William Drew, editor of Restaurant magazine. "French cooking still dominates cooking around the world, more than any other tradition."

Drew points out that over the 12 years of the list's history, restaurants from France have featured more than any other nation. There’s no decline, he insists, just growing competition due to rising standards elsewhere in Europe, the US and emerging gastro-powers in Asia and Latin America.

With five restaurants in this year's list, France is still in third place behind Spain and the US with seven apiece.

“It's simply that there are other players in the game. More and more, culinary styles from other parts of the world, different traditions are coming to prominence on a global scale."

Meanwhile, France's highest ranked restaurant the Mirazur, overlooking the Mediterranean in the Riviera resort of Menton, has a chef from Argentina — Mauro Colagreco, who honed his skills with French legends Alain Ducasse and Alain Passard.

Colagreco now crafts pigeon with spelt and rose petals, and red prawns with asparagus and wild garlic flowers into plates that look more like art works than food. And his 100 euro ($137) tasting menu is a bargain compared to the prices charged by some of the chart toppers.

More from GlobalPost: The 9 drunkest countries in the world

Beyond such rarified heights, and despite an infusion of fast food joints, tourist traps and shopping mall chains, France is still a world leader when it comes to more down-to-earth eateries.

In rural hotels, small town bistros and Parisian neighborhood hideaways, it's still easy to eat fabulous food across the country.

"I think we in France are still the best," jokes Naulleau, who runs Agapes with his wife Claire in a quiet Left Bank street a block from the River Seine.

"There's no reason to worry about French cuisine. There are plenty of great chefs, who represent grand French cuisine, and people like us running this little place as best we can," he says during a pause between preparing meals for the locals who flock to the cozy bistro.

"Our philosophy is to take fine products, cook them simply, using seasonal recipes. We are a neighborhood restaurant offering good value for money. That's what we do."