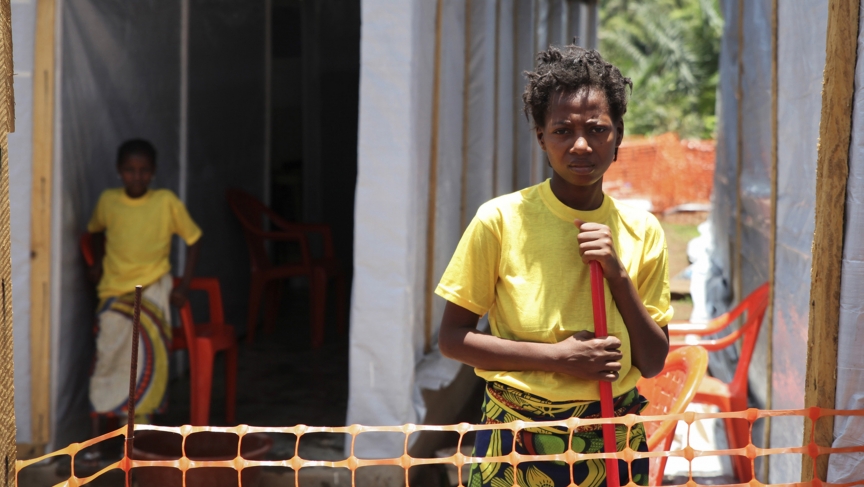 Rose Komono poses for a picture at a health clinic after overcoming the Ebola virus in Gueckedou, Guinea. In April, Komono became the first victim to have beaten the disease in the region of Gueckedou, which has borne the brunt of the deaths in the impoverished West African nation.
Credit:

There's a new dance tune that's caught on in Liberia and Guinea. It's called "Ebola's in Town."

The song is the creation of three Liberian musicians: D12, Shadow and Kuzzy of 2 Kings. And yes, the Ebola in the title is a reference to the Ebola virus.

Three West African countries are struggling to contain an outbreak of Ebola. It first appeared in a remote part of Guinea a few months ago but then spread to the capital, Conakry. It has since moved into Liberia and now there are reports of cases (including deaths) in Sierra Leone.

The World Health Organization has documented a total of 281 clinical cases of Ebola in this current outbreak, including 185 deaths in Guinea since the virus was first identified as Ebola in March.

The dance tune, "Ebola's in Town," happened spontaneously. And there's a dance that goes along with it. The song is not part of any organized public health campaign but its lyrics are commands and warnings like 'Don't touch your friend', 'Don't eat the food' (a euphemism for sex), 'No touching' and No kissing."

They're straight-forward suggestions but they over-reach and feed into some stigma.  You don't get Ebola from touching someone.

Like HIV/AIDS, humans get Ebola through close contact with blood, secretions, organs or the bodily fluids of infected animals. Guinea, for example, has banned the sale of fruit bats, a local delicacy in West Africa and the natural host of the Ebola virus.

The 'don't touch' admonition in "Ebola's in Town" feels like a throwback to the early misinformed days of the HIV/AIDS crisis when many people believed you could get HIV/AIDS just from touching someone.

But fear of Ebola is real. The disease is deadly with a 90 percent fatality rate.

Symptons include a fever, throat and muscle pains, and headaches. There's also nausea, vomiting, diarrhea, decreased functioning of the liver and kidneys and at some point people have problems with internal and external bleeding. Some people have contracted the virus while preparing other victims' bodies for burial.

Also, the West African outbreak does not appear to be under control. Last week Guinean health officials announced two new confirmed cases of Ebola in an area previously untouched by the virus.

The challenge of getting out a public health message about Ebola is enormous. Guinea and Liberia have adult literacy rates of below 40 percent and music, theater and radio are routinely used to spread public health messages. So if "Ebola's in Town" isn't 100 percent accurate, the song is finding listeners and dancers and bringing the health crisis out into the open.

Ebola
Ebola in town
Don’t touch your friend!
No touching
No eating something
It’s dangerous!

Ebola
Ebola in town
Don’t touch your friend!
No kissing!
No eating something
It’s dangerous!

They sit down grab me
They say something in town
Frisky!
That thing that in town it quick to kill
That me scary-o
E-B-O-L-A
Ebola. Ebola in town.

I say it will kill you-o.

My pa Jehovah
Please save us from Ebola
Nowhere to go
Nowhere to hide
And I ain’t come in town
My people, ya’ll please take time
Take time before you get that disease
Don’t overlook it
That thing it quick to kill

Don’t take it for joke
My people, I saw it before
Be on the safe side, you hear me?
Ebola.