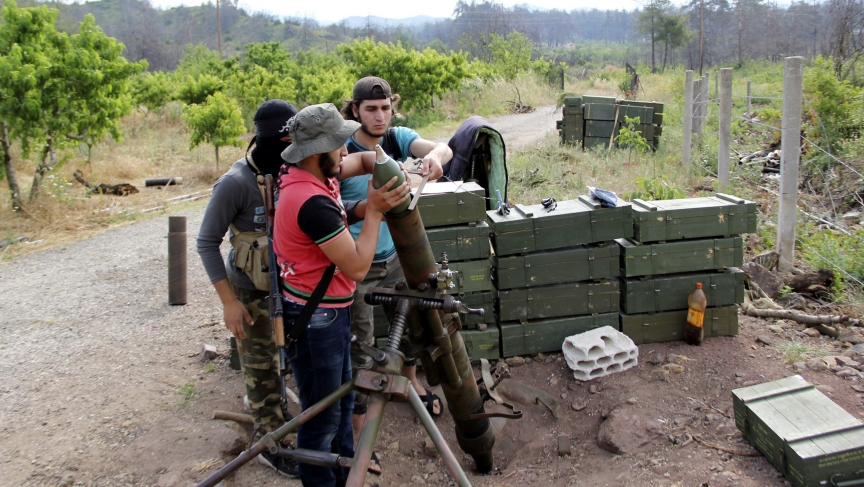 Rebel fighters prepare to launch a mortar towards forces loyal to Syria's President Bashar al-Assad in the village of Tshalma near the Armenian Christian town of Kasab May 26, 2014.

The war in Syria has dragged on for years with little change, but there have been signs recently of progress by forces loyal to President Bashar al-Assad.

That's not the outcome the US was hoping for, preferring some sort of negotiated peace that sees Assad out of power. So, according to a documentary from the the PBS program FRONTLINE, the US has quietly increased the amount of support it's sending to Syrian rebels. Severals videos of so-called moderate groups using powerful US missiles have been posted on YouTube, but now it seems the US is considering — or perhaps even already has begun — offering direct training to Syrian forces.

In a joint reporting with McClatchy, FRONTLINE outlines some of the factors weighing on any US decision to, publicly or privately, increase its support for Syrian rebels. As would be expected, concerns about al-Qaeda and terrorism figure heavily.

Meet my husband, the padre? Pope hints at possibility of priestly marriage

For the past 1000 years or so, the Catholic Church, with few exceptions, has taught that its priests should remain unwed and celibate — effectively taking the church as their spouse. But Pope Francis, who has rocked church conservatives with some of his previous comments, recently suggested that could change.

Francis had expressed similar thoughts as the archbishop of Buenos Aires, but his comments to reporters coming back from Israel recently were the first time he repeated them as pope. Reuters looks at the nuance behind the pope's position.

When Pablo Escobar, the Colombian kingpin, was at the height of his power, he turned his luxurious estate into a zoo — bringing in wild animals from foreign continents and faraway lands. When Escobar was killed, most of his menagerie was transferred to more reputable zoos. Most, but not all.

The hippos stayed. What's the worst that could happen? Turns out, the hippos love Colombia. Warm weather, easy access to water and no natural predators? That's a receipe for a hippo population explosion. And that's exactly what happened. Now locals are trying to figure out what to do with this large herd of hippos. PRI's The World reports.

Was a professional hitman behind Belgium's Jewish museum attack?

Three people were killed and a fourth wounded in an attack Saturday on a Brussels Jewish museum on Saturday. It's certainly not the first attack on a site connected with Judaism, which immediately raises question of anti-Semitism. But this attack may have been different.

The Independent reveals that authorities in Brussels are looking into the possibility that this attack was carried out by a professional hitman, rather than some sort of lone-wolf anti-Semite. Brussels city authorities have turned the investigation over to federal authorities.

What could go wrong if we destroy the last-known supplies of smallpox?

Scientists this week are debating whether they should destroy the two remaining known stocks of smallpox virus — a disease that was wiped off the planet in the 1970s. On the one side are scientists who say the virus is deadly and extremely unlike to reoccure. On the other are scientists who claim it may come back — and what if there are unofficial stockpiles in the wild that no one knows about?

PRI's Science Friday looks at the different claims and considers whether we should eliminate the smallpox virus samples held in the US and in Russia.

Kurdish moms who lost children in the Roboski bombing travel to Soma to grieve with miners' families. MT @faruk212121 pic.twitter.com/QayoVh2vwN

Moscow is enduring record-breaking heat — at least on a Russian scale. Monday's high of 85 (29 Celsius) was the ninth day in a row with temperatures in excess of 80 degrees (27 Celsisus), according to AccuWeather.