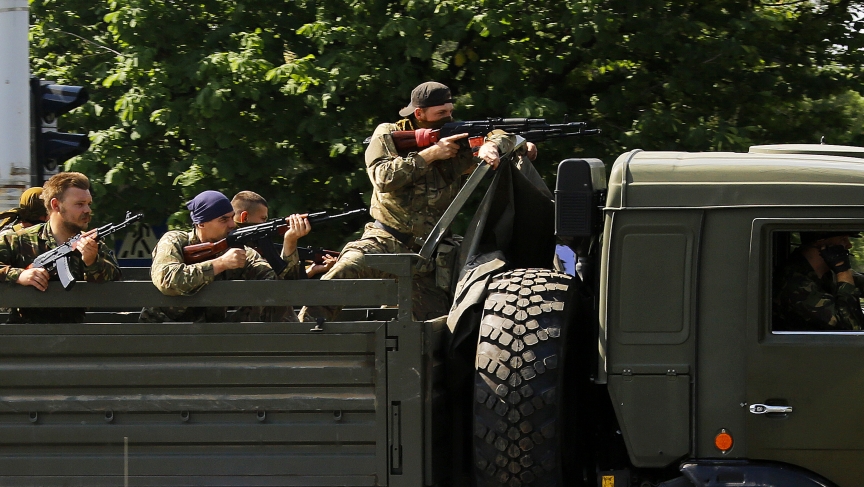 A military truck with armed pro-Russian militants drives through a police check-point towards the airport of the eastern Ukrainian city of Donetsk May 26, 2014.

If there was any hope that the weekend's presidential election in Ukraine would calm things down there, it hasn't worked out that way.

President-elect Petro Poroshenko has come out swinging and vowing to put down the rebellion by pro-Russia separatists in Ukraine's east.

And, almost on cue, Ukraine's military launched a major operation against the rebels including air strikes and a ground assault to take back the airport in the eastern town of Donetsk.

Pictures of a bullet-riddled truck emerged from Donetsk while blood stains covered the ground.

When it was over, more than 30 separatists were reported dead.

The BBC's David Stern in Kiev, says it appears that the government forces have complete control over the airport and the pro-Russia separatists have now retreated.

Stern says one question many are asking at this point is what will happen next. Will the government press forward with this military operation and will the insurgents counter-attack?

According to Stern, while the military's success to recapture the airport in Donetsk is considered an important and strategic gain, that doesn't mean tensions are over.

"It's a very fluid situation," he says.

Stern says one surprising factor about the latest events in Ukraine is that for some Ukrainians, the separatist threat (or the Russian threat, as some see it), has actually brought people together.

"There is more unity. they feel that Ukraine is in danger and this is in some cases working to the government's favor," he says.

At the same time, people are hoping that the new president will bring peace to the country. They are interested and anxious to see what he will do next.

"Ukrainians have been dealing with these clashes for a while and now that the election is over, people just want to get on with their daily lives," Stern says.