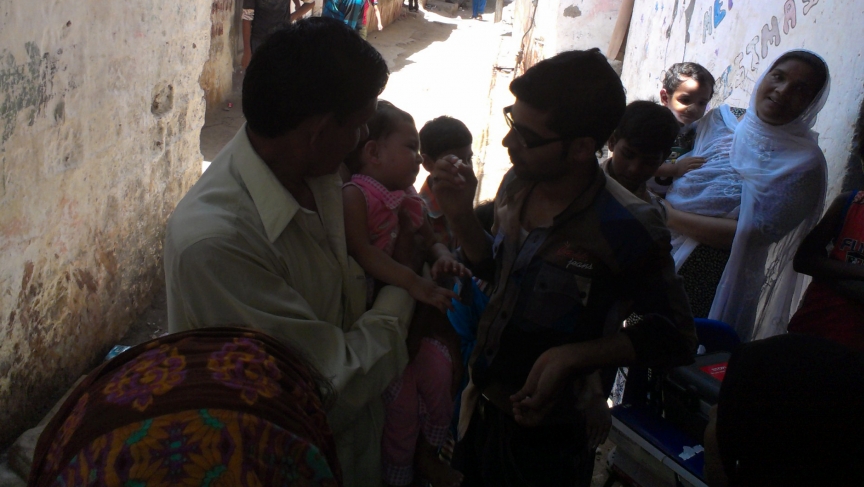 A child is immunized against polio at a makeshift clinic in a poor Karachi neighborhood, named Hijrat.

In a narrow alleyway in the working-class neighborhood of Hijrat Colony in Karachi, a team of government health workers has set up a makeshift vaccination clinic, consisting of little more than a chair and a stool. Two policemen with Kalashnikovs look on.

The team asked nearby mosques to announce from their loudspeakers that anyone with young children should bring them to the clinic to get vaccinated for polio and measles. And parents and children arrive regularly. Occasionally, a crying young boy is dragged to the clinic by his friends, like a prisoner. And when the injection is finally administered, the rest of the kids cheer and dance.

This vaccination team is just one of hundreds that set out across Pakistan every week in the fight against polio. The drives were given greater urgency earlier this month when the World Health Organisation declared Pakistan as one of three polio exporting countries in the world, and advised that all international travelers from there be vaccinated for the virus. Of the 82 confirmed polio cases reported worldwide so far the year, 66 of them are from Pakistan.

Most of the people in Hijrat Colony understand the importance of vaccinating their children for polio, and they are happy for the free service.

“If we don't vaccinate our children, then they can become disabled,” says retired soldier Akram Khan while waiting in line with his two-year old grandson. “You have to be a bit strict with children in this regards, but it will lead to them having a better life.”

But not all parents in this neighborhood are so eager, or aware. For them, the polio teams have to go door-to-door, through the winding maze of alleyways, asking if there are any children under the age of five in the home.

Many parents are easily convinced after some coaxing by the team of health workers. In well-rehearsed routines, they explain the dangers of not getting vaccinated and the ease of the procedure. But some parents remain unconvinced.

“Our family doesn't do polio drops,” says one refusing mother to the health workers at her door. When the team tries to ask why, so that they can reason with her, she just repeats that it's not done in her family. The team finally gives up and just gives a measles shot. While measles and other vaccinations are not controversial, it is only the polio drops that arouses suspicion.

A member of another vaccination team in the area has also faced rejection. “Everyone refused me,” he says, with his cooler box slung over his shoulder. “When I tried to explain things to them, they just cursed at me. They think the polio vaccine is a sin, or that the Quran doesn't allow it.”

There are all sorts of myths in Pakistan about the polio vaccine. Among the most popular are claims it causes infertility in boys or early puberty in girls, or that it contains pork products — something forbidden in Islam, or that the polio vaccine program is part of a Western conspiracy to weaken Pakistan and the Muslim world.

Part of the problem stems from the current leader of the Pakistani Taliban, Mulla Fazlullah. In about 2007, he setup a pirate radio station in the Swat region of Khyber-Pakhtunkhwa province that he would to preach against the polio vaccine, calling it a western plot.

The nail in the coffin was the revelation in 2011 that the CIA had actually run a fake a vaccination program to nab Osama bin Laden. The Taliban subsequently banned polio vaccination campaigns, and there were several deadly attacks on vaccination teams.

Of the 66 polio cases reported from Pakistan so far this year, two-thirds were from the Taliban-controlled North Waziristan tribal agency. Health workers say most of the vaccination refusals in Karachi come from Pashtun communities originally from Khyber-Pakhtunkhwa province and the tribal areas.

However the rumors haven't just been restricted to the poorer, Pashtun-speaking areas, but are being fanned in other parts of the country also.

Zaid Hamid is an ultra-nationalist, anti-American television personality who typically speaks on security and defense. His following is mostly among Pakistan's urban educated middle class. Last week, he devoted one of his shows on a national TV station to raising questions about the polio vaccination campaign.

“So what we very strongly feel is, there is something very fishy about this program,” he said on the show, “especially when we know the program is heavily penetreated by the CIA.” Much of the evidence to back up his claims came from vaccination skeptics based in the United States.

The World Health Organization, UNICEF and the Pakistani government have run ads to counter this portrayal, using celebrities like famed cricketer Shahid Afridi.

Officials have also tried to get religious leaders on board. Maulana Samiul Haq is a well known conservative cleric and politician. Many Taliban leaders studied in his madrassas, and he is often called the 'father of the Taliban'. He issued a fatwa recently declaring that polio vaccines are not against Islam. News stations showed footage of him giving polio drops to babies.

But the urgency, and the aggressiveness of the polio campaign may have backfired in some ways. The polio vaccination drives take place every Sunday in high-risk areas like Hijrat Colony, which vaccination workers say has added to the suspicion and doubts that some parents feel.

“Parents tell us, 'We don't have enough to eat but you come to give us polio drops every week,'” says vaccination worker Shaheen in Hijrat Colony. “The parents are wary that vaccinating their children every week could be harmful.”

It's a sign of the breakdown of trust that has been growing in Pakistan, between communities and the government. One of the police officers guarding the clinic chimes in, explaining that he would also be skeptical of anyone who offers help without asking for anything in return.

“There are so many scammers out there, that people have grown to become suspicious of help,” he says.

The reality is that refusals are only part of the problem in getting children vaccinated. Maybe the biggest issue is just the sheer magnitude of the logistics. Millions of children have to be vaccinated across a vast country, and officials have to find staff willing to take on the increasing risks of trying to do the right thing.