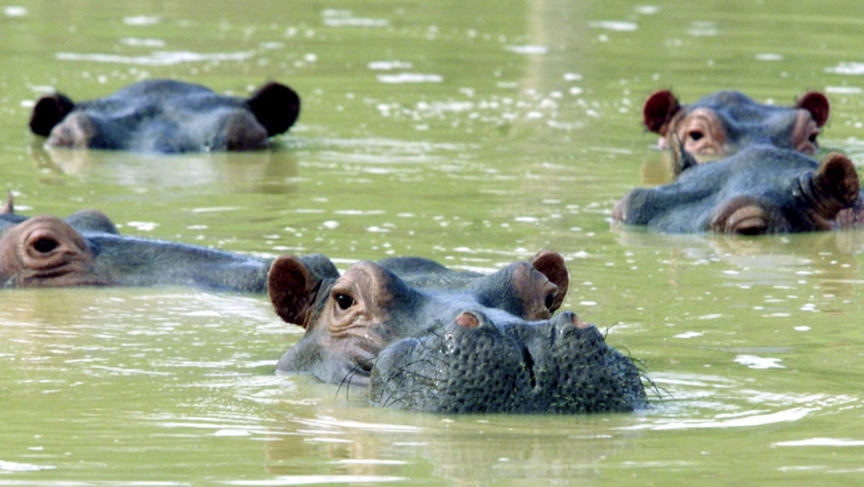 A herd of hippopotamuses swim in a muddy lake at the abandoned country home of former drug kingpin Pablo Escobar in central Colombia in Puerto Triunfo.

Pablo Escobar, the former Colombian drug lord who was killed in 1993, had an affinity for exotic animals. In the early 1980s, he created a zoo alongside his swimming pools, race track and small airport on his estate known as Hacienda Nápoles.

When Escobar was killed by the Colombian police, his estate was left deserted. Many of the animals were rounded up and moved to zoos, says Hernando Alvarez, a Colombian-born reporter for BBC Mundo. But not all of them.

"Nobody wanted to get a hold of a couple hippos and the authorities thought not much of it. They have a good environment in this massive farm that used to belong to Pablo Escabar, so they left a couple there. ... Nowadays there are around 60 hippos in Colombia.”

The hippos soon moved out of the estate and into the town of Puerto Triunfo, where farmers and fishermen live. The hippos, originally from sub-Saharan Africa, found a comfortable home in Colombia's warm weather and easy access to water. There are also no hippo predators in Colombia. Hence, the population explosion.

So far, there have not been any human casualties, but Alvarez said villagers are not used to working alongside the threat of hippos. “The locals just want them out because they know they’re very dangerous. I think that nobody wants to mess with the hippos, but so far it’s pretty much like a big question mark about what to do with them.”

The locals are looking for a solution to their hippo infestation. But even finding a refuge that can take such a large population will be difficult. “Nobody wants to take them because they are very expensive to feed, to keep, and very difficult to control, and it will be very hard to find a specialist on hippos in Colombia," Alvarez said.

Alvarez said euthanasia has been considered. "Some people see that as the only solution before it gets completely out of control."