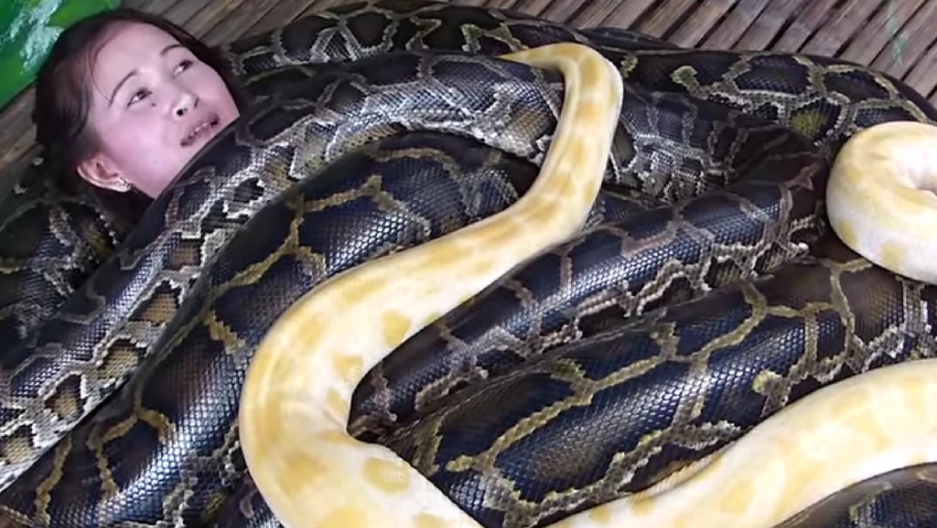 You've had a stressful day and you could really use a hug. So why not treat yourself to a nice, relaxing snake massage!

At the Cebu City Zoo in the Philippines, visitors can enjoy the unusual experience of being pinned down by four giant Burmese pythons which slither on top of them for 15 minutes per session.

Here’s how it works: You lie down on a bamboo mat while zookeepers brief you on the process. Then they take the four pythons — named Michelle, Walter, EJ and Daniel — out of their cages and pile them on top of you.

One after the other.

Burmese pythons are NOT tiny. (videotravelnews/YouTube)

As the snakes begin to writhe on your prone body, you maintain a polite, professional silence and let them do their job. Or maybe you can’t really talk, since their combined weight is around 550 lbs.

Either way, you’re not going anywhere covered in a quarter ton of pythons so you might as well try to enjoy it. Fortunately the slithering motion is said to be “calming and therapeutic,” reports Yahoo News.

Zoo manager Giovanni Romarate says, “At first, visitors feel fear but most of the guests who try the snake massage say that they like it. It's like getting a hand massage. You get to enjoy the cold grip of our snakes.”

But what’s to stop the pythons from eating you? Technically, nothing. But each is fed a pre-massage snack of up to 10 chickens. The idea is they’ll be too stuffed to bother with the tasty human meal lying right underneath them.

Really, it’s a win-win situation — you get a cheap massage while the pythons get something warm to lie on. But there ARE a few rules:

1) No shouting for help. As one visitor told the Daily Mail, “...the snake can feel your vibrations and thinks you're prey or a predator, depending on the environment.” So try to keep a cork in it for at least 15 minutes.

2) No blowing air at them. Apparently it's like pinching them on the bum (metaphorically speaking) and this can rile them up, reports Yahoo News. That's a very bad idea because even though they're not hungry, they're still capable of squeezing you to death.

Now enjoy your massage, and ignore the fact you look like some sort of hideous crime scene as you lie there covered in snakes.