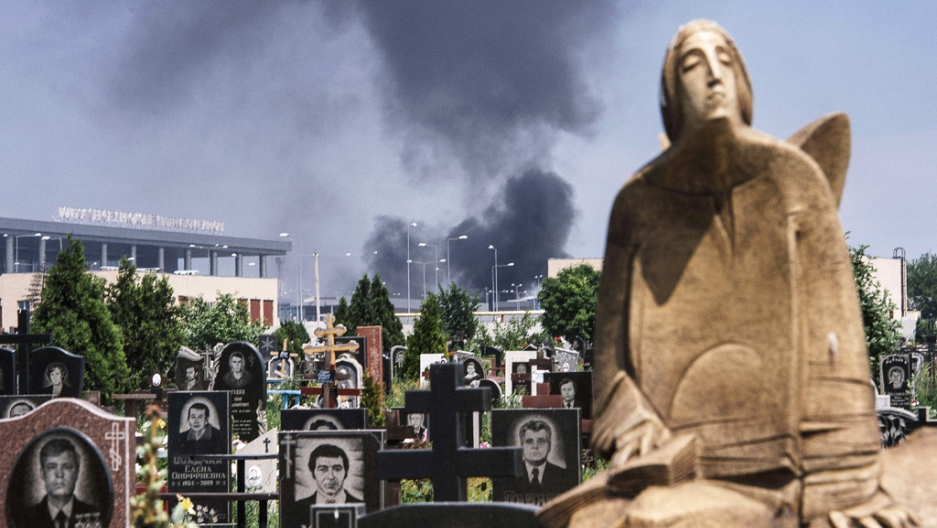 Black smoke billows from Donetsk international airport, seen behind a cemetery, during heavy gun battle between the Ukrainian army and pro-Russian militants in the eastern Ukrainian city of Donetsk on May 26, 2014.
Credit: DIMITAR DILKOFF
Share

This live blog is now closed.

A ghost town in eastern Ukraine

Central #Donetsk a ghost town this evening. Some shops even boarded up their windows. Eerie how quiet, empty it is. pic.twitter.com/7TuEeQ8PEp

Fighting in Slovyansk, and trying to untangle what happened in Donetsk

The Washington Post's correspondent has a play-by-play of how events unfolded in the Ukrainian military's assault on the armed pro-Russian insurgents at Donetsk's airport:

The fighting grew in intensity. A Ukrainian military jet soared overhead, releasing little puffs of silvery orange chaff to counter possible antiaircraft missiles. There were more explosions, and black smoke rose in the distance behind a Lexus car dealership.

It was extremely chaotic now. Volleys of machine gun fire rattled off to one side of us, near the runway radar, and off to the other, around the corner from the Lexus dealership. Police, journalists and pedestrians ran through the tall grass along the boulevard. It wasn’t always clear whether people in flak jackets were journalists or militants until you were close enough to see their body armor marked “PRESS.”

This AP report includes an update on fighting in Slovyansk, another city in eastern Ukraine that saw separatists take over key locations:

Reuters — President Barack Obama congratulated Ukraine's president-elect, Petro Poroshenko, on his election victory on Tuesday and offered US support as he seeks to unify the country, the White House said.

Poroshenko, a billionaire confectionary magnate, won Sunday's election and has vowed to crush a revolt by pro-Russian rebels in eastern Ukraine after Russia's seizure of Crimea.

A White House statement said Obama congratulated Poroshenko and offered "the full support of the United States as he seeks to unify and move his country forward."

The two leaders agreed to continue their conversation during Obama's trip to Europe next week, the White House said.

As Senior Correspondent Dan Peleschuk wrote on Monday, electing a new president was the easy part for Ukraine.

Read more about the herculean task before Ukraine's 'Chocolate King.'

The grim aftermath of the assault in Donetsk

These photos capture the aftermath of the deadly violence in Donetsk:

Reuters — Russian President Vladimir Putin called on Tuesday for an immediate halt to Ukraine's military operation against pro-Russian separatists in the east of the country.

In his first reported comments on Ukraine since its presidential election on Sunday, Putin also stepped up pressure on Kyiv to start a dialogue with the rebel leaders as fighting raged in east Ukraine.

The Kremlin said Putin had spoken to Italian Prime Minister Matteo Renzi by telephone and "underscored the need for an immediate halt to the punitive military operation in the southeastern regions and the establishment of peaceful dialogue between Kyiv and representatives of the regions."

Moscow has amassed troops on the frontier with Ukraine during the crisis, in which Ukraine's Moscow-basked president was ousted and Russia annexed the Crimea region from Ukraine, but said last week they had started to withdraw.

NATO has noted, however, that many still remain.

Reuters — A Danish government minister said on Tuesday that four missing monitors from European security watchdog the OSCE, including a Dane, were believed detained by pro-Russian separatists in Ukraine.

The Organisation for Security and Cooperation in Europe (OSCE) earlier said it had lost contact with one of its teams of civilian monitors near the city of Donetsk, where rebels are clashing with Ukrainian government forces.

"I can confirm that a Danish person deployed as a part of OSCE's (monitoring mission) according to our knowledge was detained by the armed separatists in Ukraine along with three other observers yesterday," Danish Minister of Trade and Development Mogens Jensen said.

The assault as it happened

This footage from Associated Press captures the Ukrainian military's aerial assault on the separatists who took over Donetsk's airport:

Lavrov said halting bloodshed in Ukraine's southeast was the most important task for the authorities in Kyiv after the nation elected a president on Sunday, Itar-Tass reported.

Meanwhile, the Ukrainian government accused Russia of sending "terrorists" across its border on Tuesday after border guards clashed with armed men in the east of the country overnight.

The foreign ministry in Kyiv said it was protesting over Moscow's failure to take action against a concentration of up to 40 truckloads of armed men. The border guard service said it believed some of these had succeeding in crossing the frontier near Astakhovo, in Luhansk region, about 150 km from Donetsk.

"There are grounds to believe that Russian terrorists are being sent onto Ukrainian territory, organized and financed under the direct control of the Kremlin and Russian special forces," Ukraine's foreign ministry said.

Armed pro-Russian militants ride on a truck to the airport in Donetsk during combat with Ukrainian troops on May 26, 2014.

Reuters — European security watchdog OSCE has lost contact with one of its teams of monitors near the city of Donetsk in eastern Ukraine, where pro-Russian militants are fighting Kyiv government forces.

The team of four monitors — comprising an Estonian, a Swiss, a Turk and a Dane — came into contact with a road checkpoint on Monday at around 6 p.m. and had not re-established contact, a Kyiv-based spokesman for the OSCE mission said on Tuesday.

The Vienna-based Organisation for Security and Cooperation in Europe (OSCE) said the monitors had been on a routine patrol east of Donetsk.

The OSCE said it had not yet been able to re-establish communication with the team of monitors. "We are continuing with our efforts and utilizing our contacts on the ground. The Ukrainian government as well as regional authorities have been informed of the situation."

A Western envoy accredited to the OSCE said: "It is a very scary situation."

In early May, pro-Russian rebels in eastern Ukraine freed seven European military observers from a separate OSCE-linked mission after holding them hostage for eight days.

The 57-nation OSCE — which seeks to prevent conflict and promote democracy on the continent — decided unanimously in March to deploy civilian monitors across Ukraine to try to help to defuse the crisis there, so far without much success. The mission consists of about 282 people, including 198 civilian international monitors from 41 OSCE countries, according to the Vienna-based organization's website.

Reuters — Ukrainian forces fought with separatists in the city of Donetsk for a second day on Tuesday after inflicting heavy losses on the rebels and the government vowed to press on with a military offensive "until not a single terrorist" was left.

Pro-Russian rebels said more than 50 of their fighters had been killed. The mayor of Donetsk, an industrial hub in eastern Ukraine, said the death toll in the clashes which erupted on Monday stood at 40, including two civilians.

A Reuters correspondent counted 20 bodies in combat fatigues in one room of a hospital morgue, some of them missing limbs.

Gruesome. At least 45 dead rebels here at #Donetsk morgue after battle yesterday. One man with leg blown off. pic.twitter.com/A6YAEAvS2Z

Ukraine used air strikes and a paratroop assault on Monday to clear rebels from Donetsk's international airport and had pushed the separatists out of the complex by the end of the day.

Black smoke billows from Donetsk international airport, seen behind a cemetery, during heavy gun battle on May 26, 2014.

But shooting continued through the night and on Tuesday the road to the airport bore signs of fighting overnight and heavy machine gun fire could be heard in the distance in mid-morning.

"The airport is completely under control," Interior Minister Arsen Avakov told journalists in the capital Kyiv. "The adversary suffered heavy losses. We have no losses," he added.

"We'll continue the anti-terrorist operation until not a single terrorist remains on the territory of Ukraine," First Deputy Prime Minister Vitaly Yarema said on the margins of a government meeting.

"We have 29 or 30 dead on our side but that is not the final count yet," said Dima Gau, a rebel representative.

Donetsk mayor Alexander Lukyanchenko said 40 people had been killed in the past day, 38 of the bodies being of those involved in fighting around the airport.

Pro-Russian separatist fighters take positions outside the Donetsk airport on May 26, 2014.

The prime minister of the rebels' self-styled Donetsk People's Republic (DNR), Alexander Borodai, was quoted by Russia's RIA news agency as telling a news conference in the city: "We have lost more than 50 volunteers."

Ukraine launched the fresh offensive against the rebels, who have occupied strategic points in Donetsk and other towns in the east, after Ukraine's newly elected president rejected any talks with "terrorists."

Petro Poroshenko, a 48-year-old billionaire oligarch, won overwhelming support in Sunday's election that many hope will draw a line under six months of upheaval. He said a robust military campaign in the east should be able to put down a separatist revolt in "a matter of hours."

On the road to the airport, Reuters journalists saw blood-spattered and bullet-riddled hulks of trucks of the kind the separatist fighters have been using.

Though the rebels backing the self-proclaimed republic had suffered serious losses, the heavy machine gunfire indicated that government forces were still facing resistance.

Pro-Russian militants armed with an assault rifle and a rocket launcher stand during combat with Ukrainian troops at the international airport of the eastern Ukrainian city of Donetsk on May 26, 2014.

It was too early to say if the apparent military successes of government forces could break the rebellion in Donetsk, the first of a rash of such revolts across eastern Ukraine after months of turmoil in the capital that led to the ousting of the Moscow-backed president, Viktor Yanukovych.

In Donetsk on Tuesday a hockey stadium was set ablaze, though firefighters managed to bring it under control.

A Kamaz truck of the type rebels use to ferry their fighters was wrecked on the airport road, covered in blood and completely riddled with bullet holes. Blood had spattered across the entire roadway and even reached a billboard seven meters above.

Outside the city centre, another Kamaz was flipped over, its deck covered in blood.

The mayor reinforced warnings for people to avoid the airport area and said nine schools and two hospitals had been closed, with patients evacuated elsewhere. He reassured people that food and other supplies were still reaching the city.