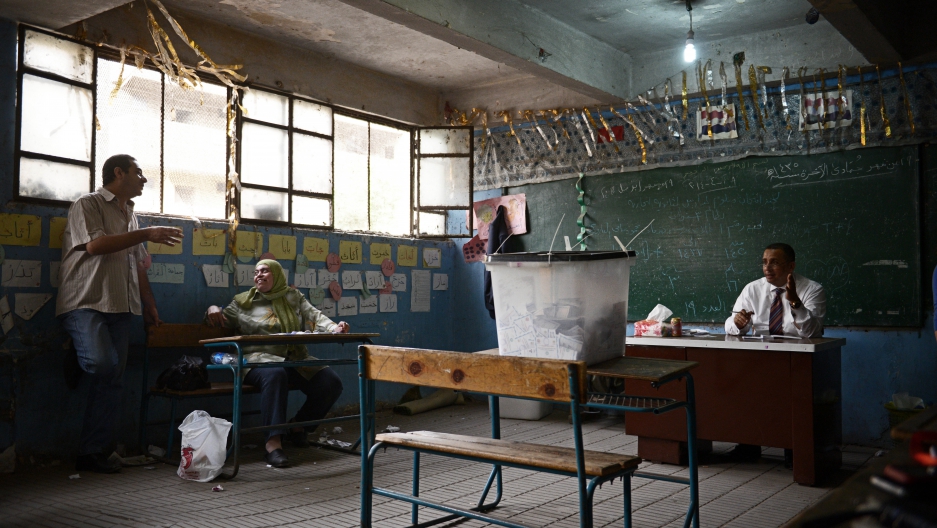 Oops.
Credit: Jonathan Rashad
Share
CAIRO, Egypt — As an indifferent election turnout on Monday and Tuesday threatened to undermine Abdel Fattah al-Sisi's image as the presidential candidate for all Egyptians, the authorities took remarkable measures to try to boost the vote, backed by a gaggle of anxious businessmen.

The real battle in Egypt's presidential elections has turned out to be not over who citizens will vote for, but whether they will vote at all.

Sisi, the former military chief, is set to overwhelm the only alternative candidate by a landslide, but apathy, cynicism, and the widespread belief that the election is little more than a coronation sanctioned by Egypt's elites kept many, particularly the young, from the polls.

Opposition activists called for a boycott, while the establishment exhorted Egyptians to vote.

No official figures were available, but Ahmed Hafez, executive director of the grassroots monitoring organization Shayfeenkom estimated that Monday's turnout was around 15 to 20 percent, and lower on Tuesday, judging by the figures he had received by early afternoon.

"Upper Egypt is a desert," he said, referring to the south of the country, where the Islamists who ran the country until Sisi toppled them have traditionally been strong. Hafez said one of his volunteers had reported from a polling station near the town of Qena, where just six of several thousand registered voters had turned out.

Both private and state-owned newspapers urged citizens to vote Monday morning. The headline on Tahrir, a privately owned pro-establishment daily, simply read "go down," next to a large photograph of a blank ballot paper.

As polling drew to a close that evening, Prime Minister Ibrahim Mehleb announced a national public holiday, giving all public servants the next day off to vote. The stock exchange declared that it would be closed the next day.

But by Tuesday morning in many areas, the lines had gone from short to non-existent.

Miguel Cunat, a communications officer for the Global Network for Relief and Development, which is monitoring the elections nationwide, said that the turnout was low on the first day, and even lower on the second.

By midday Tuesday, the eccentric but popular nationalist television personality Tawfik Okasha was begging his audience to vote. "What do you want? Should I strip live on air?" Okasha implored, before announcing, probably not seriously, that women who went shopping rather than vote "should be shot."

The owners of Cairo's largest mall announced that it would close early at 4 p.m. to encourage shoppers to go to the polls. Some public transport fares were waived. Some senior officials began to say that citizens who did not vote without a valid excuse would be punitively fined. Other officials denied no such fine would be implemented.

Finally, with just three hours of voting to go, it was declared that polls would open Wednesday, too.

Two women's polling stations in Cairo visited by GlobalPost Tuesday afternoon welcomed a slow but steady trickle of voters. An official at one put the turnout until then at around thirty percent. Women have been applauded by Sisi and his supporters in the press for turning out in greater numbers than their male counterparts. "Long live women," read the headline of one nationalist daily, Youm7.

But several other polling stations were all but deserted.

One Sisi voter, Khaled Ahmed, a 33-year-old accountant, confessed he was surprised that the school building in which he voted was all but empty. While confident in his choice of candidate, he now thinks that Egyptian media made too much of Sisi's popular support.

"They exaggerated," he said, "and most of the young generation don't believe in Sisi."

One such young person is Ashraf, 21, who sells the popular Egyptian dish of stewed beans, fuul, to a working class clientele in the east of the city. His cynicism about the elections explains why so many people declined to get involved.

Ashraf, who is sympathetic to the Muslim Brotherhood, described Sisi as a "new Mubarak." Since Sisi deposed the Brotherhood's Mohamed Morsi, the nation's first freely elected president, human rights abuses have alienated both Islamists and secular radicals.

In the wake of the coup, more than 1,000 supporters of Morsi have been killed, and thousands  40,000, by one estimate  have been imprisoned, including a friend of Ashraf's.

When one of his customers found out that Ashraf would not vote, the customer called him a terrorist — an accusation that could have serious consequences, given how little it takes for so-called terrorists to be arrested and charged these days. Ashraf now bites his tongue in front of his customers, who overwhelmingly support the field marshall.

The lack of room for real debate and the suppression of the opposition, he says, make the elections illegitimate.

It is likely that, even with a relatively low turnout, Sisi's dominance in the ballot — widely expected to be over 80 percent — will mean that he takes a greater share of the electorate than Morsi did two years ago. But this election has so far revealed a more divided and more cynical nation than that which Sisi and his backers had hoped for.

An opinion poll released by Pew last week put the field marshall's support at 54 percent, just 16 percent ahead of the Brotherhood.

"He will need to do something good, and quick[ly] to make people's lives better," said Khaled, the Sisi backer. "If not, he will face a very big problem."