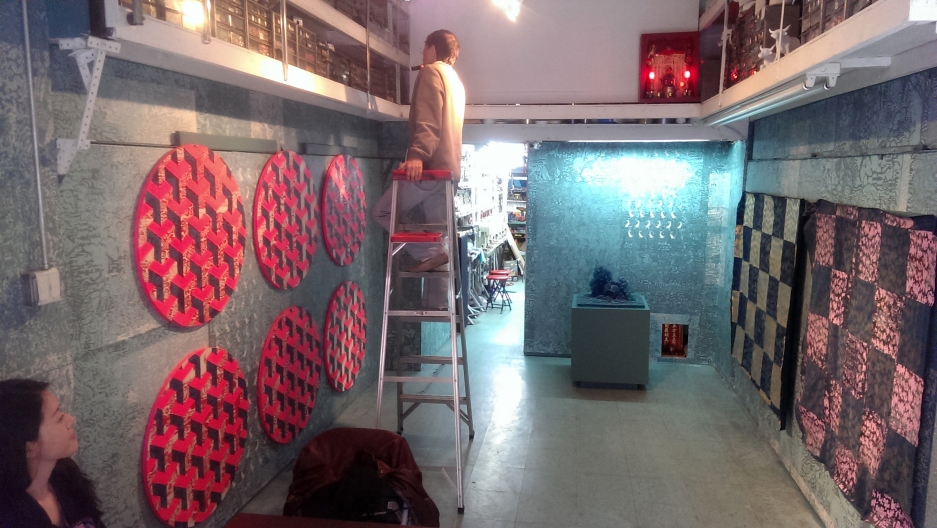 Amy Li uses the front space of her father's 30-year-old button shop in Manhattan's Chinatown as a place to showcase local artwork. The shared space has helped both Amy and her father — button customers are intrigued by the artwork, and Amy helps her father translate from Chinese to English.

The other day, walking through lower Manhattan when I spotted a t-shirt in a shop window that said, “I am Banksy.” And had two thoughts: one, "Ha Ha," and two, "Crap, there goes the neighborhood."

Because I was on Mott Street, in the heart of Chinatown, an area that's long been a stronghold of locally owned, locally oriented businesses, a place where most of the signs are still in Chinese.

This shop was just another symbol of the coming hipster apocalypse. What we kvetch about when we kvetch about New York City is real estate, specifically rent. Forget about people who say "Fuggetabout," soon New York will be a city of oligarchs in search of their fifth pied-à-terre.

Then I noticed the sign above the door was in Chinese. Besides the Banksy shirts, there was some weird, sartorial debris in the window. But when I went inside, I learned this business isn’t just local — it’s hyper-local.

“It confuses most people. Some of them were upset because they don’t know that I’m Mr. Li’s daughter. They thought I’m just someone who’s here to push him out, just here to close down this mom-and-pop business. But when people find out it’s a gallery, they get really excited,” says Amy Li.

Amy was raised in Chinatown, on this same block where her father, Mr. Li, has run the He Zhen Snap Button Company for more than 30 years.

“It started when I came back in June after finishing my Masters. I was looking for an event space in Manhattan, but it was impossible for someone like me to rent a space,” Amy says. “I was trying to do what many curators in New York do, which is use vacant space that’s in between owners or in between leases and use it for art shows, but in my experience the electricity wasn’t on and the plumbing wasn’t on, so it ended up with me asking my dad here and he was very open to it."

Amy found out renting a small storefront in Manhattan would cost anywhere from $4,000 to $10,000 a week — not money she’s likely to make selling provocative work from emerging artists. So last September, she renovated the front room of the button shop on her own.

“It was covered in old and yellow maps,” she says. “It was very dusty.”

Even Amy’s artists are locally sourced; at least some of them, like Brian Ermanski, a painter known as the “Prince of Elizabeth Street” who likes to carry a boombox.

Opening her dad’s shop to a really different kind of clientele, also reminds Amy they may share a storefront, but they’re still from different worlds.

“We weren’t together often before that because my dad is so busy working, and now we work right next to each other and it’s difficult at times,” Amy says. “With Brian Ermanski, for example, he wears his trademark top hat and velvet cape when he’s out selling art and painting and my dad was very confused, so he was asking me, 'Why? What’s going on? What is this?' So we just have little arguments here and there but it’s to be expected.”

I ask Amy if I can ask her dad a couple of questions, and a terse conversation between them ensues. When Mr. Li, who does not speak English, consents to an interview, I can tell he’s very uncomfortable. I feel like a cape-wearing intruder with a blasting boombox, tolerated only for the sake of his daughter. However, when I ask him how the gallery side of the business has been going, he doesn’t sugarcoat:

“He thinks they’re not very profitable, which is true, but he understands people’s passions and interests,” says Amy translating for her dad.

But when I ask what it’s like working alongside his daughter all day, he cracks a smile for the first time.

“He says he’s happy and he’ll support me no matter what,” she says.

As I sit here talking to Amy, customers come and go, some for the art, some for the buttons; after a while it doesn’t seem like such a weird combination anymore.

I also can’t help but notice that Amy’s a seriously good button saleswoman. She tells me her dad’s business has definitely improved since she’s been around to translate for him.

So what about adding the name of her business — Amy Li Projects — to her dad’s sign outside? It turns out the omission is intentional.

“I wouldn’t have succeeded if I was in just the typical white-wall, white-box gallery, because no one would want to come in and talk to me. But people here, they see all these buttons, and they ask, 'What is this?' They have no idea what’s going on, so I enjoy explaining it to them,” she says.

Keeping things on the down low — just another time-honored, New York City tradition.

A previous version of this story misspelled the name of the He Zhen Snap Button Company.