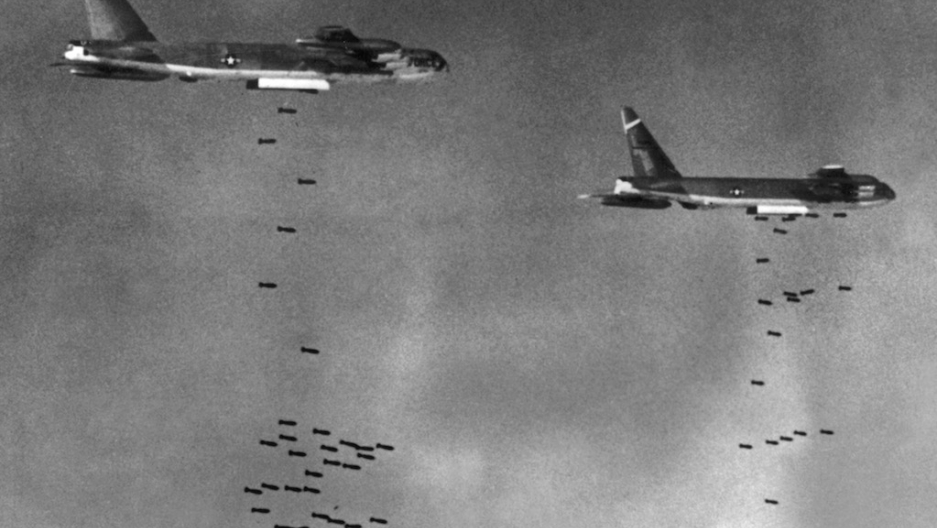 US B52 drop bombs over a Viet Cong controlled area in South Vietnam 02 August 1965 during the Vietnam War.
Credit: STF
Share

DONG HA, Vietnam — Nguyen Van Thi is a farmer, not a soldier, but with his missing limbs and severe burn scars, he epitomizes the brutal and ongoing aftermath of the Vietnam War.

Thi, 45, found a small explosive while tending to his crops back in 1999. Not knowing what it was, he picked up the device, brushed off the dirt and tapped it with his hoe.

It blew off his left hand.

Then in August last year, he was planting trees outside his village when he struck another forgotten US bomb. This one erupted into a powerful fireball that scorched his legs and eliminated half his left foot and two fingers, fractured his arm and partially blinded him.

“I saw a huge flash and it knocked me unconscious,” said Thi, whose pants caught fire and melted to his charred skin.

The fire quickly roused Thi, who rolled over to snuff out the flames. Then for two hours he lay in agony before an ambulance — scarce in rural Vietnam — transferred him to a district hospital.

Decades after combat against the US ended, Vietnam has resurrected itself as one of the fastest-growing economies in Asia.

Yet it is stricken with mine and bomb victims who lack vital support.

In 2012, Vietnam’s Ministry of Health reported that fewer than 10 percent of survivors were able to access rehabilitation programs.

Introduced in 2010, the country’s mine action plan is years behind other ordnance-infested nations, including neighbors Laos and Cambodia, which were also blanketed with bombs during America’s Cold War-era offensive.

Almost four times more explosives were used on Vietnam during the war than in all of World War II. An estimated 800,000 tons of unexploded ordnance — known as UXO, and consisting of bombs, mines, munitions and other explosives — remain, afflicting a staggering 20 percent of the country, officials say.

If true, that’s more than the 635,000 tons of bombs dropped by US forces in the Korean War.

In Vietnam, US forces used more than 15 million tons of firepower — roughly half from aircraft and the rest on the ground. Historians believe that the US deployed the vast majority of the explosives used during the conflict.

Since the end of the war in 1975, bomb remnants have killed more than 42,000 people and injured at least 62,000 others, according to the government's preliminary statistics. That death toll exceeds the number of Americans killed in action during hostilities (40,934 — although an additional 17,296 Americans perished from wounds, disease and the like, according to the US National Archives).

Vietnamese officials stress that the number is an estimate. With no national database, UXO incidents cannot be accurately tracked and countless victims in remote areas are overlooked, advocates say.

“There are many more accidents out there that we don’t hear about,” said Hong Tran Chi, country director for Clear Path International (CPI), the main nonprofit group for victim assistance.

And the carnage continues to this day. Since 2000, CPI has helped nearly 1,000 new cases, a large portion of them children as young as toddlers.

“Many children grow up playing with all kinds of munitions found on the land,” Chi said. “The most painful thing is to witness children blown up by UXO.”

Victims like Thi and their families often receive no disability payments from the government.

Today, the proud farmer tries to stay positive about the fact that he is alive, yet he seriously doubts his role as the family’s breadwinner.

“I never thought it would happen again,” he said. “Now I feel desperate. I’m supposed to work and support my family but now I’m a useless person sitting around all day.”

One of the world’s poorest countries 25 years ago, post-Soviet economic reforms lifted Vietnam to lower middle-income status in 2009 — a bittersweet accomplishment meaning that many foreign donors have redirected funds elsewhere.

Vietnamese Prime Minister Nguyen Tan Dung recently urged the international community to help “speed up the removal of bombs and mines, to secure people’s livelihoods and to assist victims.” The country spends only $80 million, about 0.20 percent of the national budget, on ordnance removal and victim support, an amount the government admits is grossly inadequate.

There are also questions about how even that money is spent. “The government hasn’t been very transparent on what they fund,” said Portia Stratton, country director of Mine Advisory Group, an international NGO. “Transparency is increasing. It’s not perfect, but they are working on it.”

Government officials currently expect foreign donors to cover about half of the estimated $368 million required for mine action activities — mainly to clear ordnance and help victims — from 2013 to 2015, according to a 2013 update on the mine action plan.

But foreign donors pitched in only $8.7 million for mine action in 2012, with almost 80 percent of the funds earmarked for ordnance removal with the US contributing more than 40 percent of the total, the Landmine and Cluster Munition Monitor reported.

Vietnam also has no specific strategy for victim assistance in its national mine action plan.

“The main focus of the plan is to get rid of the immediate threat — the things that go boom and kill or injure people,” said Chi, of Clear Path International. “Helping victims is not seen as a proactive way.”

Amid donor funding constraints, the five-member Clear Path International team has assisted more than 12,000 victims and their families, the majority of them affected before the CPI project existed but still entitled to free medical care, rehab, prosthetics, education opportunities and income generation projects.

The group stepped in to pay $1,700 for Thi’s latest medical bills, equal to six months of his family’s income. The team also purchased a breeding cow for Thi, who can no longer work in the fields.

“I have no choice but to accept my physical condition,” the disfigured farmer said. “Without this assistance, we would be in an enormous amount of debt.”