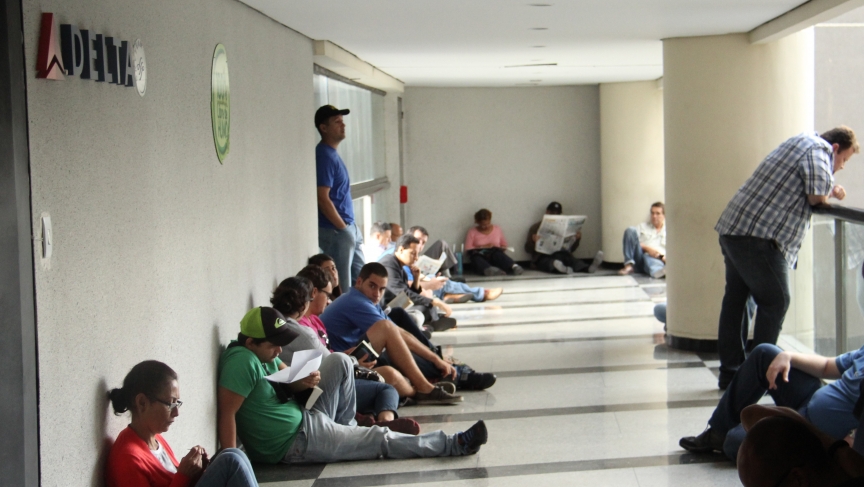 Dozens of desperate travelers wait in front of a Delta airlines ticket office at dawn in Caracas, Venezuela.

Yamileth Iturbe waits anxiously at a terminal in central Caracas. Given the length of the journey ahead of her, she has reason to be uneasy.

She's about to travel nearly 2,000 miles across the continent to visit her family. And she’s going by bus.

For several months now, Venezuelans have been struggling with shortages of basic goods: shortages of milk, flour, cooking oil and even toilet paper. And if you want to get out of Venezuela to take a break from it all, you run into another shortage – airline tickets.

"It's a four or five day [bus] trip to get to Lima, Peru,” says Iturbe. “I have my own expectations, but it's a little bit scary because it's my first time making this trip, but it was my only option.”

She tried for two months to get a plane ticket. She called airlines and travel agents, but finally she gave up.

And she's not alone. As Venezuela’s economic crisis grinds on, airline tickets are increasingly hard to come by because airlines have reduced their flights or grounded operations entirely.

In May, Lufthansa and Alitalia announced they would suspend service in Venezuela. Carriers complain that they can’t get their money out of the country because of the Venezuelan government’s strict currency controls. These cutbacks have ruined travel plans for thousands of people, and they’ve made the work of Venezuela’s travel agents virtually impossible.

And yes, they still have travel agents in Venezuela. Nelly Corral works in a travel agency in Caracas and she says it’s very frustrating to do her job now.

Trying to buy tickets online doesn’t help much either, so now people have resorted to lining up in front of airline ticket offices. Carlos Cabrera was one of the dozens of desperate travelers in front of a Delta ticket office at daybreak recently.

"They're not selling any tickets online anymore,” Cabrera says. “This is one of the last airlines that's still doing business with Venezuela. The majority of airlines are planning to leave and many have already left. The line you see here today is due to that. Little by little, you feel trapped in your own country.”

President Nicolás Maduro has tried to downplay the cutbacks. Last week, he blamed the World Cup. He said airlines have been rerouting flights to Brazil to accommodate increased travel for the mega-sporting event starting in June.

But Angel Garcia Banchs, an economist, says the problem is not soccer. It’s debt. The Venezuelan government owes the airlines nearly $4 billion.

"There's a debt that's increasing and increasing and it's not being repaid,” he says. “So basically they are deciding to close their business here and to move their airplanes abroad.”

Government officials have acknowledged the debts and they’ve said the government plans to pay them off, but it hasn't happened yet.

In the meantime, people like Nelly Corral, the travel agent, have to keep searching for any available plane ticket.

"We call fishing: 'you’re trying to fish a seat' And we don’t' have a net,” she says, laughing. “We have to go through a computer, looking for so, so many requests.”

It’s not that there are no seats; it’s just that it’s hard to get them if you’re using the local currency.

I’ve gotten lucky several times in the past few months, finding tickets at last the minute, just days before departure. But if things continue to get worse, next time I leave the country, I may have to make a cross continent bus ride, too.