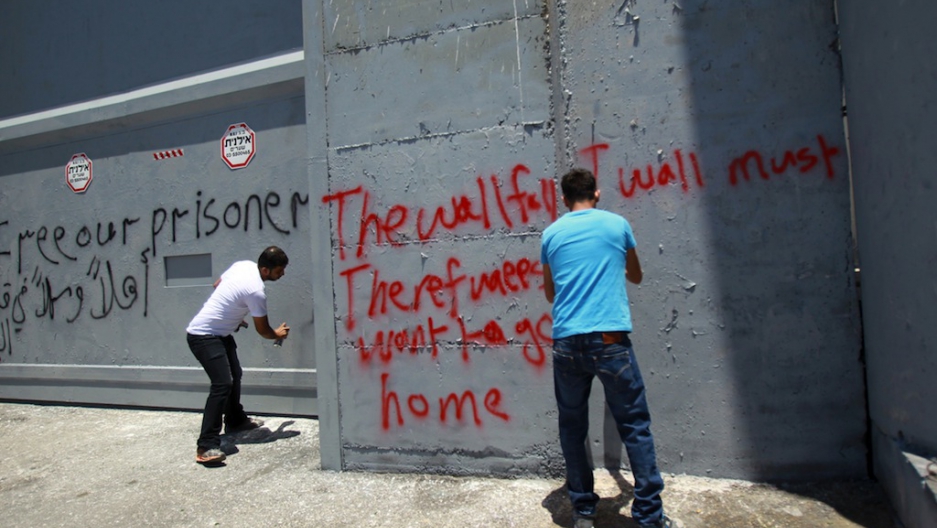 Palestinian spray graffiti on an Israeli army watchtower which makes up a section of the controversial Israeli separation barrier on May 24, 2014 in the West Bank's Biblical town of Bethlehem, where Pope Francis will celebrate a Sunday Mass.
Credit: Musa Al-Shaer
Share

When Pope Francis arrived in Bethlehem to preside over a Sunday Mass in Manger Square, he followed in the footsteps of religious pilgrims through the centuries who’ve sought to physically and spiritually connect with the place where tradition holds that Jesus was born and where the Christian faith began.

But the Palestinian Christians who are not tourists or pilgrims but actually live in Bethlehem and Jerusalem as well as villages throughout the Israeli-occupied West Bank and Gaza are a small and steadily diminishing minority.

The living presence of the Christian faith is disappearing in the very land where it began, now representing less than 2 percent of Israel/Palestine. This erosion of the indigenous Christian population, predominantly Eastern Orthodox but also Roman Catholic as well as Eastern Rite or Uniate churches that are “in union” with Rome but preserving local traditions, dates back over a century.

That’s when Christians first began emigrating out of the Middle East largely seeking to avoid conscription in the Ottoman Empire’s armies and to find economic opportunity in Europe and the Americas. To emigrate, the Middle East’s Christians relied on connections to the West through their churches.

More from GlobalPost: The Road to Emmaus, Dwindling Christian communities in the Middle East

Since 1948 when the United Nations voted to recognize the modern state of Israel, Palestinian Christians — like their Muslim neighbors — have suffered amid decades of war, violent resistance to occupation, Israeli military crackdowns and for the last 20 years a faltering peace process that has failed to deliver on its promise.

The peace process has once again broken down after the Israeli Prime Minister Benjamin Netanyahu ceased talks last month. Pope Francis has insisted that his journey is spiritual, not political. But it will hard for the pontiff, a head of state who presides over the world’s 1.2 billion Catholics, to sidestep the minefield of Israeli-Palestinian politics. And even if he tries, both sides will judge just about every word through the prism of their own politics.

In these days of bitter political division, Palestinian Christians are uniquely caught between two rising tides of religious extremism — the Jewish settler movement in the West Bank and the Islamic extremists of Hamas.

Both seem equally contemptuous of Christians and both have threatened and carried out violence against them. American Christian fundamentalists have also forced themselves into the equation in recent decades by offering strong spiritual and financial support to Israel and to the settler movement. Seeking to challenge that support, Palestinian Christian leaders drafted the so-called Kairos Document in 2012 which calls upon Christians of the world to work to end Israeli occupation and to recognize it as “a sin against God and humanity because it deprives the Palestinians of their basic human rights, bestowed by God.”

It is meaningful that Pope Francis is making this journey accompanied by two friends, a rabbi and an Islamic cleric, who he has known for years from his native Argentina. It seems a clear statement in an age of religious extremism and intolerance that Pope Francis would bring an interfaith delegation, a physical reminder of the connections between the Abrahamic faiths of Judaism, Christianity and Islam whose religious narratives unfold in the shared sacred space of the Holy Land.

In the wider Middle East, indigenous Christians in Iraq, Syria and Egypt have also suffered under war and political upheaval and the intolerance of Islamic extremist movements. Some Middle Eastern countries, most notably Jordan where Pope Francis visited on Saturday, have had good relations between Christians and Muslims, but overall there is an historic exodus of Christians underway from the Middle East, according to demographic experts such as Bethlehem University’s Bernard Sabella who are studying the migration.

On this pilgrimage, it will be hard for Pope Francis to see the real plight of Palestinian Christians amid the security cordons, the strict curfew imposed by the Israelis in Jerusalem and the pre-screened crowd of 9,000 expected to greet him in Manger Square.

But it is right there in front of him: the enormous concrete barrier walls that rise up around Bethlehem and block the sunlight on three sides of the Anastas’ home.

These concrete “security” walls surround the Palestinian Christian family like “a cement tomb,” as Claire Anastas described it to me on a visit last year to Bethlehem.

The gray, concrete-slab walls are 28 feet high with razor wire coiled along the top, just one section of a barrier that scars the modern landscape of the Holy Land. For 10 years, Israel has been steadily building the walls to separate the Palestinian population from Israeli settlements in the occupied West Bank, walling off Jerusalem and the borders of Israel which the government maintains is all intended to increase security for Israelis.

The concrete walls have become a canvas of protest with graffiti and murals on just about every square inch that can be reached. And amid the spray painted peace symbols, Palestinian flags and nationalist slogans there is one message that reads: “Not by might, nor by power, but by my spirit – So sayeth the Lord.”

“It’s a prison here. I feel like I am buried in a cement tomb,” said Claire Anastas, who lives there in the Bethlehem neighborhood near the checkpoint between Jerusalem and Bethlehem with her husband and three children. The view from the top floor of the home is blocked by the concrete and through the razor wire an Israeli military gun turret is visible.

On this trip to Bethlehem, I reconnected with many of the Christian communities that I had come to know living in Jerusalem from 1997 to 2001 as the Boston Globe’s Middle East bureau chief. During the time I was researching a book titled “The Body and The Blood: The Holy Land’s Christians at the Turn of a New Millennium.”

Inside the Church of the Nativity, I found Elias Jeraisi, 55, who holds the keys to the Catholic chapel in the 6th century stone church that sits atop the site where tradition proclaims that Jesus was born and where the stones of a cave are believed to be the manger where Mary and Joseph would have sought shelter.

“A lot [of Christians] are leaving, more than ever. It ‘s because of the way the occupation hurts the economy. The economic situation is very bad,” said Jeraisi.

“The Israelis have constructed the walls in a way that they force tourists to go to the hotels and restaurants on the Israeli side. They only come here to Bethlehem for the day and they spend very little money,” he added.

Jeraisi said he is also blocked from seeing family in Jerusalem and other parts of the West Bank. He is prevented from visiting doctors in Jerusalem. The communities of Jerusalem and Bethlehem that were once side by side and reliant on each other are now completely separated. Jeraisi explained that families get a one week permit once a year, if they are lucky, to go to the Holy Week services in Jerusalem, which is just a few miles away.

Most of his extended family have emigrated to the West, he said, but he quickly added, “I would rather starve than leave.”

Not all have the constitution to stay.

Kostandi Canavati, 70, is perhaps a more reflective case. His family has been migrating since the Ottoman era in the late 19th century. The migratory pattern continued through the 1950s and into the decades of war that followed in the 1960s ad 1970s and then the intifada or “uprising” of the 1980s and again in the year 2000 during the second intifada.

It’s always been a steady stream, but the outflow seems more dramatic now as the numbers have dwindled so far down that some demographers, like Sabella, are predicting that the living presence of Christianity in Jerusalem could virtually disappear in the next generation.

When I last saw him, Canavati, whose family owns a large and prosperous tourist shop in Bethlehem, was traveling to California and he and his wife were looking for real estate.

“Yes, we’re thinking about it. We want to stay, but it’s harder and harder,” he said.

GlobalPost co-founder Charles M. Sennott is the author of “The Body and The Blood: The Holy Land’s Christians at the Turn of a New Millennium” (PublicAffairs, 2001).