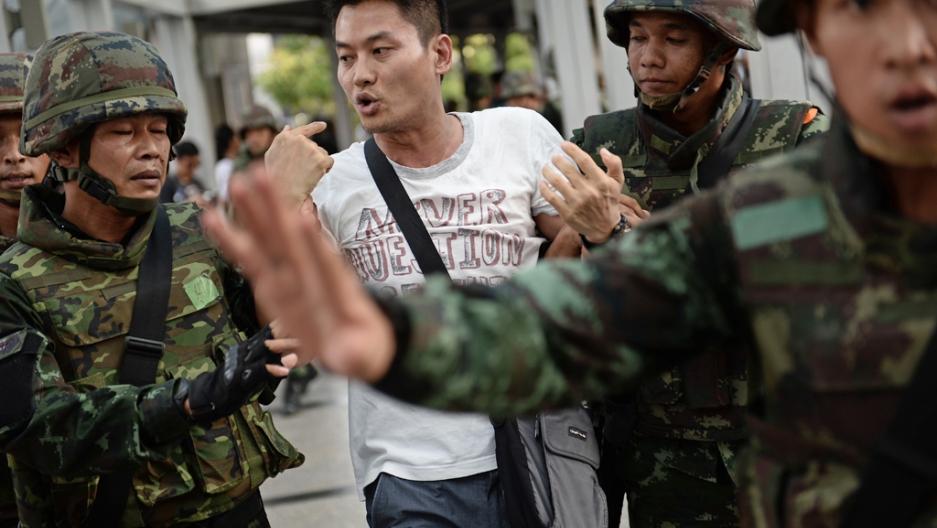 An anti-coup protester is taken away from the site of a gathering by Thai soldiers in Bangkok on May 24, 2014.
Credit: CHRISTOPHE ARCHAMBAULT
Share

WASHINGTON, DC — Thailand’s elected government, ground to dust by courts and street mobs over the last six months, has finally been swept away by a military coup.

Thailand is now run by a junta led by Prayuth Chan-ohca, a stodgy 60-year-old general with deep ties to the nation’s monarchy. This is the Southeast Asian nation’s 12th successful military takeover since the end of full-on palace rule in the 1930s.

Much of Thailand’s public learned of the coup on TV, where Prayuth and fellow armed forces leaders announced their putsch in solemn tones against a drab backdrop. “As of this minute, I’ve decided to seize power,” Prayuth said. His vague rationale: restoring order and peace to a country riven by political conflict.

But his coup is a provocative move with the potential to create even more disorder in Thailand.

Thais who prefer to choose their own leaders — that would be the majority of the population — have largely tolerated a concerted effort to shred electoral rule by the courts, the army and coup-happy, royalist street protesters. With the elected party’s politicians in detention, and martial law in place throughout the nation, the government’s last drop of authority is sapped and a new junta reigns supreme.

Here’s what to expect:

1. A “neutral” premier who isn’t neutral at all

Thailand’s military is well aware that coups are widely unpalatable at home and abroad. The US has already condemned the coup and may even enact sanctions. Moving forward, the military will likely appoint an unelected, self-proclaimed "neutral" premier to oversee a period of national reconciliation.

This would be a power grab dressed up as a compromise. A street movement calling itself a “people’s coup” has agitated for this very outcome. So has Thailand’s elite-backed Democrat Party, which hasn’t won an election in two decades. Even so-called “independent” institutions — such as Thailand’s election commission and courts — have voided elections and ousted elected elected premiers over petty scandals.

All appear to realize that an unelected premier is the only way to stop a political network that, for all its flaws, has won every election in the 21st century. This network is helmed by the tycoon Thaksin Shinawatra, self-exiled in Dubai to evade corruption charges. His parties draw their power from the upcountry and working classes, which enjoy populist policies aimed at the poor. But the rise of this network has riled Thailand’s old guard, the army top brass and royal courtiers, as well as middle-class urbanites whose preferred candidates are rejected by the voting masses.

“NOW it is COUP — stand by for a retaliation from the UDD.” That’s what Thailand’s anti-coup movement, the United Front for Democracy Against Dictatorship, proclaimed via Twitter in the coup’s immediate aftermath. This group is the central committee of the Red Shirts, a loose coalition with a common goal: resisting coups and defending electoral rule, which habitually brings to power the populist Shinawatra-linked parties they favor.

Elements of the Red Shirts have previously warned, in vague terms, of plans to fight off any Thai coup with a mass uprising that could resort to armed resistance.

Hours after the coup, GlobalPost phoned Pichit Tamoon, 44, a senior Red Shirt operative in Chiang Mai, a city in Thailand’s northern region where Red Shirt sympathies run deep. He was inside an army camp where five other Red Shirt leaders had been “invited” by the military. Across the country, the movement’s top leaders have been rounded up; rival protesters and politicians with coup sympathies have also been detained.

“It’s possible to cooperate instead of fighting. If they promise to move forward and quickly call an election, we won’t have problems,” Pichit said. “If not, we still plan to fight — in a way that I can’t discuss right now given the situation.”

Many of Thailand’s TV and radio stations have been shut down. Signals from foreign outlets, such as CNN and Al Jazeera, have been disrupted. The military has sought to create a chilling effect on free expression by warning bureaucrats and academics not to speak out in a manner that “opposes” their operations or “escalates the conflict.” Thais on social media are also warned to tow the line — but Facebook and Twitter are nonetheless buzzing with reaction to the coup.

Deference to Thailand’s 86-year-old king, the world’s longest reigning monarch, isn’t just tradition. It’s the law. Criticism of the royal family is punishable by 15 years in prison. Courts have even sentenced Thais for vague, coded speech deemed disrespectful to the palace. The new junta chief is a major supporter of these restrictions on free speech.

The coup-prone military has wiped out many political parties but vows to forever defend the monarchy’s place at the pinnacle of Thai society. Thailand’s king, the official head of state, is currently frail and seldom appears in public. All political parties publicly contend the aging monarch must be enshrined in a pious position above the sordid world of politics.

But when it comes to the king’s children, political camps appear to diverge. Many Red Shirts have offered an outpouring of affection towards the crown prince, the heir apparent who heads multiple military battalions. Their rivals — the “people’s coup” movement that egged on the army takeover — exhibit a fondness for a royal princess known as “angel.”

Blatantly advocating for a particular royal to take the helm in the future would invite criminal charges. But Thais, often in whispers, are talking about the top institution’s future — and taking note of which political camps will benefit from a range of potential outcomes.