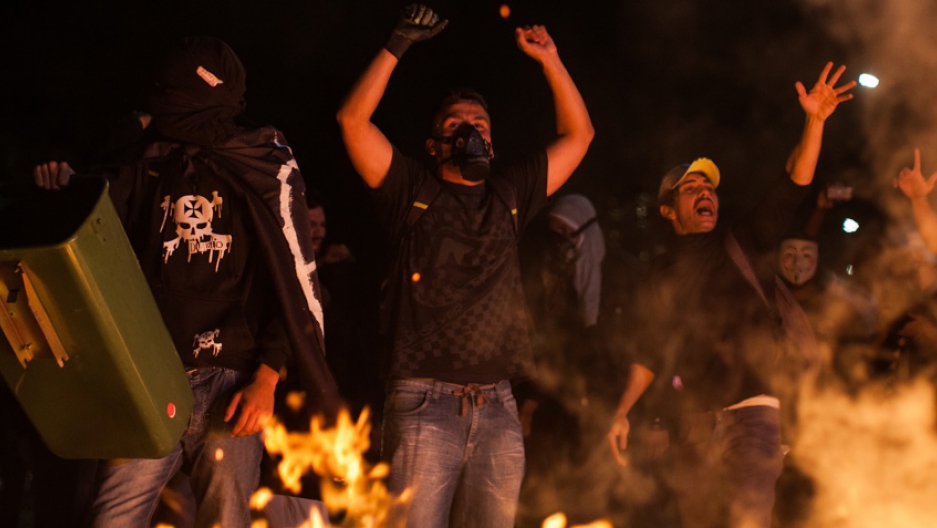 Black Bloc protesters clash with police during a rally against the World Cup on May 15 in Sao Paulo, Brazil.
Credit: Victor Moriyama
Share

But who really are these protesters who plan to run riot at the World Cup as soon as the inaugural game kicks off on June 12?

Brazil’s police allege the militants form an extremist group called the Black Bloc, and say they are watching its leaders. The local press has published exposes claiming that the Black Bloc is funded by foreigners intent on spoiling the nation’s moment of glory.

However, speaking to GlobalPost, a veteran of Brazil’s radical protest movement said the Black Bloc is not an organization at all. Rather, it’s a tactic of demonstrators who are leaderless, angry and determined to raise hell.

“It is the 10 percent of the demonstration that don’t run from police, who are not scared. Nobody owns it,” said the protester, who identified himself only as AM because of the risks of arrest.

The tactic, AM explained, consists of militant protesters, often masked and wearing dark colors, swelling together in a block during demonstrations. They break into runs, jump and shout, helping to provoke confrontation. And when police inevitably react, they are not scared to hit back.

“It is the violence that has always been in the slums of Brazil but now has come to the center of town,” said AM, a 32-year-old native of Sao Paulo.

Protesters inside the Black Blocs can actually have different political positions, he adds. But many, including him, are drawn to a form of anarchism, which he asserts is not left- or right-wing but against the entire system.

Like many in Brazil, AM is angry at the government’s spending some $11 billion on the World Cup while the country has dilapidated schools and hospitals. However, he also sees the protests as a chance to confront the wider problems in Latin America’s biggest nation. He views the movement against the cup as part of a global wave of protests being played out from Egypt to Spain to Oakland.

“The crisis is worldwide. People are seeing that representative democracy doesn’t represent anyone — here in Brazil, in London, in Greece or anywhere,” AM said. “When people go on the street and create pressure they become political actors.”

The Black Bloc tactic actually has its roots as far back as the 1980s in Germany, when squatters and anti-nuclear protesters mobbed together to confront police, and were dubbed “der schwarze block.”

It was taken on by protesters around the new millennium in the anti-globalization movement that disrupted World Trade Organization (WTO) meetings such as that in Seattle.

In Brazil, Black Blocs gained steam during protests against transport price hikes in 2011. They then mushroomed during demonstrations against the mega sporting events last year, when they were at the center of a wave of clashes with police.

More from GlobalPost: Here’s why some Brazilians want their country to lose the World Cup

Many of those filling the blocs’ ranks are teenagers or in their early 20s, often from the middle and emerging lower-middle class, according to AM.

“The new generation is very radical,” the protester says. “Many have no children, serious jobs or responsibilities and they are not scared to confront the police head on.”

Last week, Black Bloc protesters were among those who attacked businesses and lit fires in warm-up anti-cup marches.

But AM believes that’s nothing compared to how big protests could be during World Cup games.

The police have created a 2-kilometer (1.2 mile) exclusion zone around the stadiums. Protesters have a specific objective of fighting their way though the barriers.

Anticipating these confrontations, Brazilian legislators are discussing new anti-protest laws that could restrict demonstrators from wearing masks, among other things.

Such tough talk has been seen as a potential attack on the hundreds of thousands who demonstrate peacefully. Amnesty International has launched a campaign to stop rules against demonstrating, calling to “Give yellow cards to restrictions on protests.”

Riots disrupting the World Cup would be a definite strain for left-leaning Brazilian President Dilma Rousseff, who is seeking re-election in October.

However, many protesters condemn all the political parties, pouring scorn on the opposition as well as the government.

“The protests come from young people who are very disappointed with all politicians,” says Esther Solano, a social scientist who has been studying the Black Blocs. “The level of apathy among young people towards party politics here in Brazil is incredible.”

Solano concedes that a problem with the radical protests is they are not offering any clear alternative.

“It is a negative protest. They know what they don’t want but not what they want,” Solano said. “But this is because it is a historic moment of change. Many people are fed up with the old system but a new system hasn’t been built yet.”

More from GlobalPost: Come for the World Cup, swim with the feces (PHOTOS)