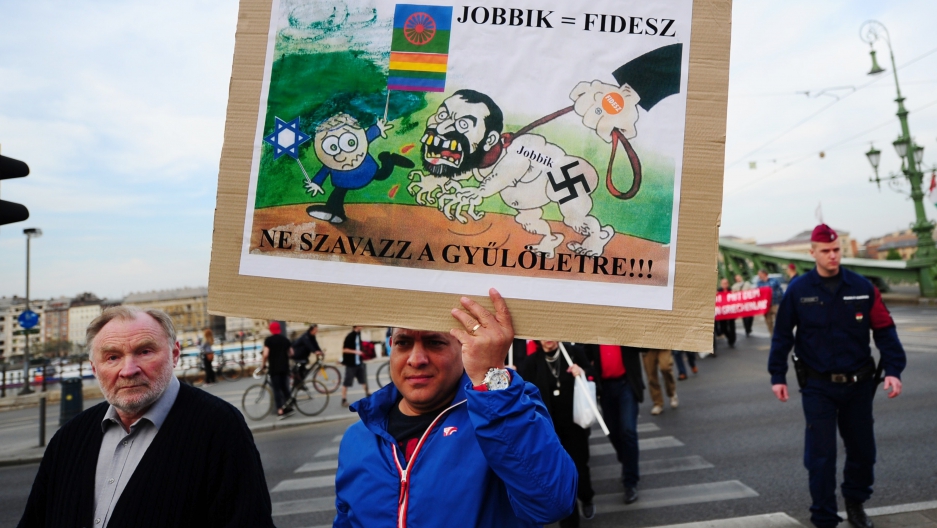 A participant holds a picture with the text "No vote for hatred" as Hungarian and foreign anti-fascist activists march at the Freedom Bridge of Budapest on April 3, 2014 during their peace march to demonstrate against the far-right policy in Hungary.
Credit: Attila Kisbenedek
Share

Editor's note: As Europeans go to the polls to elect a parliament, the most identifiable trend is the remorseless rise of xenophobic political parties. But they are not the crude neo-Nazi operations of yore. Their origins may be based in anti-Semitic feelings that never completely died out after World War Two, but now the messaging is more sophisticated. Michael Goldfarb reports from Hungary in this two-part series.

In Hungary, home to the largest surviving Jewish community in what was once the heartland of world Jewry, anti-Semitism looks a lot like ordinary life. You won’t see much anti-Semitic graffiti on walls, as you do in parts of western Ukraine and Poland.

In Hungarian politics today, anti-Semitism sounds like this comment made in 2012 by Marton Gyongyosi, a leader of right-wing party Jobbik, who deemed it “timely to tally up people of Jewish ancestry who live here, especially in the Hungarian Parliament and the Hungarian government, who, indeed, pose a national security risk to Hungary.”

Jobbik, the fastest growing political party in Hungary, refers to the Holocaust as the “Holoscam” and is expected to do well in the European Parliamentary elections beginning Thursday, sending at least three representatives to the European Parliament. It's part of a wave of right-wing, ultra-nationalist parties across Europe heading into the elections strongly.

In April’s Hungarian Parliamentary elections Jobbik took 20 percent of the vote, pushing past the Socialist party to become the second largest in Hungary.

Negative attitudes about Jews is smart politics in Hungary. There are votes in it.

"In a small society, national identity is the ultimate fighting field. Nativism is everywhere," says Tamas Ungvari, one of Hungary's leading historians, "and this is a damn anti-Semitic country."

But walk around Budapest in glorious spring sunshine and you would not sense any of this. The city’s roughly 100,000 Jews — 90 percent of Hungary’s total Jewish population — go about their business untroubled. This is partially because they keep their Jewishness to themselves.

“The identity of the Jews here is a complicated thing,” says Rabbi Boruch Oberlander, leader of the orthodox Chabad movement in Hungary. “Most Hungarian Jews are unaffiliated. Probably 80,000 have no connections whatsoever with being Jewish.”

The connection to Judaism was torn, first by assimilation connected to Emancipation, then by the Holocaust, when three-quarters of Hungary’s 800,000 Jews were murdered; then by four decades of communist rule.

Oberlander was sent to Budapest 25 years ago by Chabad to bring Jews out of their self-imposed closet.

Seated in his huge, double-height study with floor-to-ceiling bookshelves packed with Talmuds and other religious books, the 48-year-old recalls, “Twenty-five years ago the Jewish community was in bad shape. There was no life to it, just mainly old people.”

Oberlander had a lot of work to do, uncovering people's connections to their pasts.

“Almost every Jew has a story about how they discovered they were Jewish. Usually, it just slips out,” the rabbi explains.

“For example, a family is watching TV and the father makes a seemingly nasty comment about the Jews. His daughter calls him an anti-Semite. ‘How could I be an anti-Semite?’ the father asks. ‘I married a Jewish girl.’ Or a kid comes home from school with an anti-Semitic joke and the parents say, come here, we have to have a talk. And they tell him they’re Jewish.”

In 2012 such a case caused massive political embarrassment. Csanad Szegedi, was one of Jobbik’s members elected to the European Parliament in 2009. A rabid anti-Semite, he caused controversy from day one when he turned up in the uniform of Jobbik’s paramilitary group the “Hungarian Guard.”

The uniform was modeled on that of the Arrow Cross, a Nazi collaborationist group during the war. The Guard was so vicious that ultimately it was banned by Hungarian courts and the European Court of Human Rights upheld that judgment.

Szegedi in 2012 discovered he was Jewish and his grandmother was a survivor of Auschwitz. He quit Jobbik and today takes instruction in Judaism from Oberlander. He had himself circumcised and is in the process of becoming an observant Orthodox Jew.

The day before I interviewed Oberlander, he and Szegedi had visited Auschwitz together.

“It was an eye-opener for him,” the rabbi said. The pair inspected the massive killing factory of Auschwitz II - Birkenau with its ruined gas chambers, creamtoria and barracks covering 175 acres.

“He said to me, 'Now I can see how it was possible,'” Oberlander said.

Oberlander has a particular understanding of the Holocaust. Both his parents are survivors, so he has a well-informed, comparative view of what anti-Semitism is like in Hungary today.

“There is no anti-Semitism in the street, you don’t have to be afraid of sending your child to a Jewish school," he said. "On the other hand, it is uncomfortable to be called a 'dirty Jew' in the streets. But it’s not like France, where a guy walks in front of a school and shoots some Jewish kids.”

Even if most Jews do not publicly identify themselves, what happened to the Jews of Hungary is not hidden.

At the Holocaust Museum the story of the community’s destruction is told in harrowing detail. The Great Synagogue and adjacent Jewish Museum are a leading tourist attraction.

There is “The Shoes on the Danube” sculpture erected in 2005. It commemorates events of 70 years ago when the Arrow Cross took over Nazi rule as the Germans retreated before the Soviets. Hundreds of Budapest’s Jews who had survived earlier mass deportations were shot along the Danube’s embankment, their bodies pushed into the fast-flowing river.

At Central European University, Jewish Studies are part of the history department’s offerings. Peter Buchmuller — who is Catholic, not Jewish — is doing a master's degree in history with a specialization in Jewish Studies. At Terv Eszpresszo, a Soviet-era, retro-themed bar, we had a beer — just one — and he told me about the kind of verbal anti-Semitism he hears.

“[That] all of the Jews supported communism is one thing,” he explained. “[Or that] Jews are not true Magyars — Hungarians. They are international or something else.”

I asked him how he developed his academic interest in Jews. Buchmuller grew up in an area near the Danube which sounded a lot like Manhattan’s Upper West Side. It was well-to-do. Most of his classmates were from assimilated Jewish families. He wanted to know more about their history and their culture.

The normality of having Jewish friends has given him a strong views about people who express Jew hatred.

“I don’t believe in free speech," he said. "Some things are over the line, like hate speech.”

But he, like Oberlander, thinks that the times are different and that those outside of Hungary need to understand that Jews in his country face a lesser kind of hatred.

For him the critical difference is the attitude of church leaders. “The clergy - Catholic, Lutheran, Calvinists — don’t accept anti-Semitism.” In the past, he says, and certainly in the 1930s as the Holocaust loomed, that wasn’t the case.

Hungarians are religious. Buchmuller points out that on Sunday morning that it is 'standing room only' in his church - so the opinion of the priests today is important.

In Hungary, it is politics where anti-Semitism causes the greatest worry. Jobbik’s leaders have consistently denied the party is anti-Semitic but their own statements follow them.

"Given our current situation, anti-Semitism is not just our right, but it is the duty of every Hungarian homeland lover, and we must prepare for armed battle against the Jews,” wrote Judit Szima, a Jobbik candidate in the last European Parliamentary elections back in 2009. Last year, the World Jewish Congress held its annual meeting in Budapest.

At a Jobbik protest outside the meeting hall, party chairman Gabor Vona said, “The Israeli conquerors, these investors, should look for another country in the world for themselves because Hungary is not for sale.”

His deputy Martin Gyongyosi added Hungary had "become subjugated to Zionism, it has become a target of colonization while we, the indigenous people, can play only the role of extras.”

Today the Jobbik leadership is trying to change its international image and avoid making that kind of comment.

“They are smart and they have good lawyers,” says Tamas Desi of Maszihisz, the Jewish community’s main organization in Hungary.

But their supporters don’t have any doubt about their views. And it is still not clear how close the link is between the Jobbik leadership and the notorious anti-Semitic website Kuruc.info.

And in economic hard times, there are also votes in attacking international finance, code for Jewish bankers, and what many consider the Holocaust “industry.”

Jobbik, founded 11 years ago, does that with gusto.

The ruling Fidesz party, a conservative group, is not under immediate threat. But critics say it has not spoken out strongly enough against Jobbik’s anti-Semitic, xenophobic rhetoric.

Fidesz’s leader and Hungary’s Prime Minister Viktor Orban is not an anti-Semite, according to Jewish leaders. Quite the opposite. But he is first and foremost a politician who wants to consolidate his party’s power and there are no votes in pushing back against Jobbik’s anti-Jewish views.

Historian Ungvari criticizes Orban for not doing more. “To be weak in such a situation is a crime,” he said.

But there is more to Jobbik than Jew hatred. Hungary is an angry country and the party’s leaders have tapped into popular rage on a range of issues. Jobbik’s appeal cuts across many social strata.

In Part Two, Goldfarb reports from the Hungarian countryside.