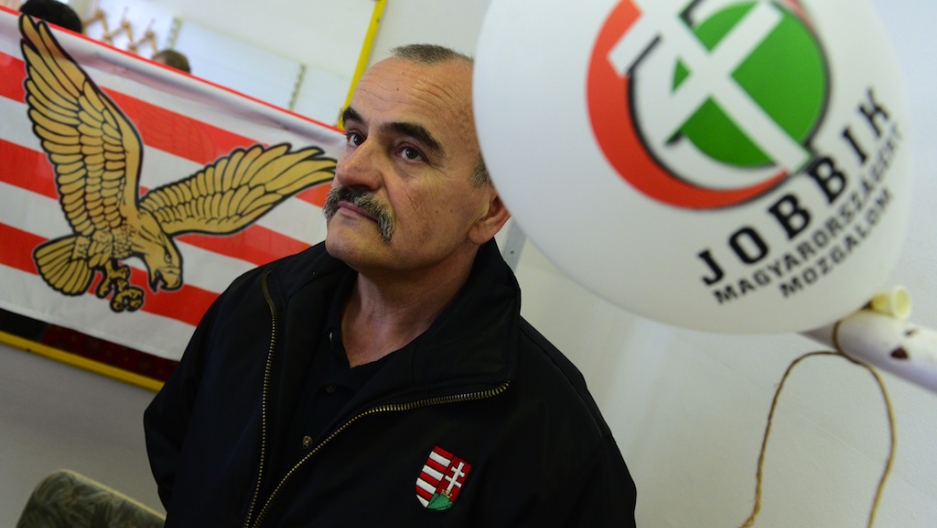 The commander-in-chief of the New Hungarian Guard, Istvan Meszaros, nominated as candidate for nationalist Jobbik party for the Hungarian National Assembly, answers a journalist's question during an interview in Baja, southern Hungary on March 24, 2014.
Credit: Attila Kisbenedek
Share

Editor's note: As Europeans go to the polls to elect a parliament, the most identifiable trend is the remorseless rise of xenophobic political parties. But they are not the crude neo-Nazi operations of yore. Their origins may be based in anti-Semitic feelings that never completely died out after World War Two, but now the messaging has become more sophisticated. Michael Goldfarb reports from Hungary in this two-part series.

HEVES, Hungary — There is no banner saying 'Welcome to Jobbik Country' as the bus pulls into Heves. But there are telltale signs that the right-wing Jobbik party rules all around this rural area of Hungary, two hours east of Budapest.

This flat, incredibly fertile agricultural region has been one of the losers of the new post-communist, globalized world. Abandoned, crumbling factories and tractors trundling down poorly paved roads speak to economic hard times.

It’s an old story but the fact is populist, nationalist political parties thrive in such conditions. Jobbik is no different. From country to country across Europe, the nationalist message is the same: “We are a noble people, the best on earth. It is outside forces and outsiders in our midst who caused our problems.”

There is one other part of the message: "The traditional parties of the right and the left have forgotten you. They are only looking to feather their own nests. We will deliver on our promises."

Jobbik has played this tune brilliantly, according to Miklos, the mayor of a small village near Heves. “One. They talk about the issues of the countryside," he said. "Two, they talk about crime and who causes it. Three, they are the only party that offers solutions. Four, they communicate with ordinary people on the basis of their gut feelings.”

And those feelings center on two groups of outsiders, according to the mayor. “Jobbik raises two important issues: Jews and gypsies,” said Miklos, who like everybody interviewed for this article he only wanted to be identified by his first name.

There are around 700,000 Roma — often called gypsies — living in Hungary. They are the most significant minority in this country of not quite 10 million people.

Seated in his office, Miklos offered some homemade palinka, the local fruit brandy, and explained how life had changed in the village where he grew up.

It was like listening to someone talk about the decline of American cities circa 1975. Government attempts to create integrated neighborhoods failed. White flight left behind a poor minority, then an economic shock left the area with no jobs. The minority just had social welfare programs for support and slowly became a permanent underclass.

Over the last four decades, that’s what life has been like in the villages of eastern Hungary. Roma were moved in by the government. Hungarians moved out. The Roma live in the villages, isolated and resented for the crimes they commit, the welfare benefits they receive and for being the perceived favorites of the government in Budapest.

“Jobbik says there should be no positive discrimination,” Miklos, who is not a member of the party, explained.

And what does positive discrimination have to do with Jews?

“Jews keep talking about the Holocaust," he said. "For example, this is the 70th anniversary and the government pays them millions of forints for memorial events.”

Seventy years ago this month, the Holocaust came to Hungary with a vengeance. Four trains a day carrying 3,000 Jews each left for Auschwitz. In just under two months, more than 400,000 Hungarian Jews were deported, most of them from the countryside in eastern and northeastern Hungary.

The deportation was organized by Adolf Eichmann and several hundred SS officers. It is not possible that so few could have deported so many without help from some of the local population.

Hungarian complicity in this action is forgotten because Hungarians also suffered in the war.

“200,000 Hungarian people died in World War II, where is the money to remember them?” Miklos asked.

He continued, “Let me give you an example. A 25-year-old man who died in a battle has two little children. Now these kids are grown and say, 'They still pay public money to the Jews but not to me? Why? In the war everybody got sorrow.'”

Jobbik, according to Miklos, plays on this resentment. They also make coded attacks when they criticize multinational businesses.

“We have a saying in Hungary: 'We cry together, we laugh together,'" he said. "Multinational companies make money in Hungary and then they take it out without paying taxes.”

And who gets the benefits of this tax avoidance? Miklos says the answer is, “Jewish shareholders. The banks.”

Jobbik’s success is not based entirely in anti-Semitic appeal — it is based at least as much on that wise cliche that all politics is local.

In Heves, population 11,000, the leaders of the local chapter of Jobbik do not fit the international image of the party. They are hardly racist thugs. Tamas is a school teacher and Isztvan is an electrical repairman. Both are soft-spoken and frustrated by the established political parties. Tamas joined the party because of the “local political situation. The big parties did not keep their promises.”

Crime and jobs are local people’s greatest concern. Isztvan had to leave Hungary for several years to work in the Netherlands because of the lack of employment. Hungary’s unemployment rate has been coming down but nationally it still hovers near 10 percent. It is higher in Jobbik country.

The pair emphasize jobs. Ask them about anti-Semitism and Tamas answers, “Everybody in the country and international media says Jobbik is an anti-Semitic party but it’s very far from the reality, it’s something made up by the other parties because this new party appears and has success.” He adds, “We have Jewish families here in Heves. I have taught Jewish children.”

Despite several requests, Jobbik’s national leadership declined to be interviewed for this article. It would have been good to ask the party’s leading candidate for the European Parliament, Krisztina Morvai, about a statement attributed to her: “So-called proud Hungarian Jews should go back to playing with their tiny little circumcised [penises] rather than vilifying me.”

She was married to a Jewish man at the time.

It would have been good to ask her how someone educated as she was, in Britain and the US, squares her work as a human rights lawyer with her party’s views on the Roma and immigration.

The answer would have been interesting.

Jobbik is a leading example of the confused politics of our era. In its rhetorical attacks on bankers and globalized capitalism the party sounds like Occupy Wall Street. In its attacks on immigrants, homosexuals and Jews it sounds like the Ku Klux Klan.

When its leaders proudly proclaim their anti-EU views — even as they campaign for election to the European Parliament — they sound very much like Republican Tea Party candidates. Both want to use democratic means to wreck democratic government.

The confusion is dangerous for all of us. But most dangerous for the same people who were targeted during World War II in the countryside around Heves: Jews and the Roma.

In Part One, Goldfarb reports from Budapest.