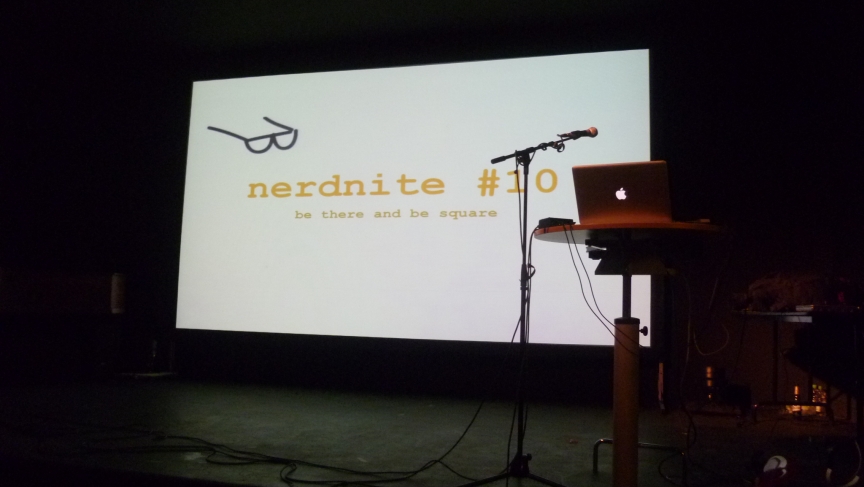 In 2003, Chris Balakrishnan was a graduate student in Boston. But for three months every year, he’d disappear to the woodlands of Cameroon to chase and study the indigo bird.

“I spent enough time there that the owners were curious what I did with my life and they would sort of miss me. Yeah — it was sort of like Cheers, except if Norm didn’t show up for three months," he said. "Everyone would be really sad.”

So when he got back to Boston, the bartender suggested Chris show a slide show at the bar about his adventures in Africa. Chris, who was used to going out to see bands, thought it was a terrible idea. No one would ever go to a bar to see a scientist.

He mulled it over and decided that maybe if he could a rope in a couple other grad student “cronies,” maybe, just maybe, they could turn it into a fun event.

The first Nerd Nite set the tone for all future nerd nights.

It was super casual. The kind of atmosphere “where people can just shout out whatever they want during the talk,” Chris says. And there was a lot of heckling, because “in biology, most of what we’re talking about is sex.  Even the bar tenders were chiming in.”

In 2006, Chris finally convinced his friend Matt Wasowski to hold a Nerd Nite in New York.  And it became popular really fast.  Pretty soon the New York event was selling out — 300 tickets each month. And it didn’t stop there. People who'd been to Nerd Nite in New York and Boston moved around the world and brought it to their new home towns.

But no matter where nerds gather, the format and goals are the same: create a casual spot for people to talk science, share research, or just talk about something they’re really into — for 20 minutes in front of a slightly drunk crowd.

The bar part is pretty key. As Chris points out, conferences and even popular events like TED talks “can be so stuffy.”

At Nerd Nite, questions are called out from the audience, and there is still plenty of heckling. Occasionally, depending on the city, there are extras — like speed dating or even acrobats.

Nerd Nite celebrates the glory of minutiae. Because you can be a nerd about anything. The most memorable talks, “probably on paper sound really obscure or just boring — or almost too specific,” Wasowski says.

Talks have featured the biodiversity of Madagascar, whiskey or Michael Jackson videos. And, of course, the science of Godzilla.

Last week alone, there were a dozen Nerd Nites around the globe. The Nerd Nite website is, maybe shockingly for nerds, pretty lame. So if you want to want to check out a Nerd Nite, you have to go to a Nerd Nite.

Fortunately, there may now be one in a city near you.

In the words of the nerds: “Be there. And be square.”