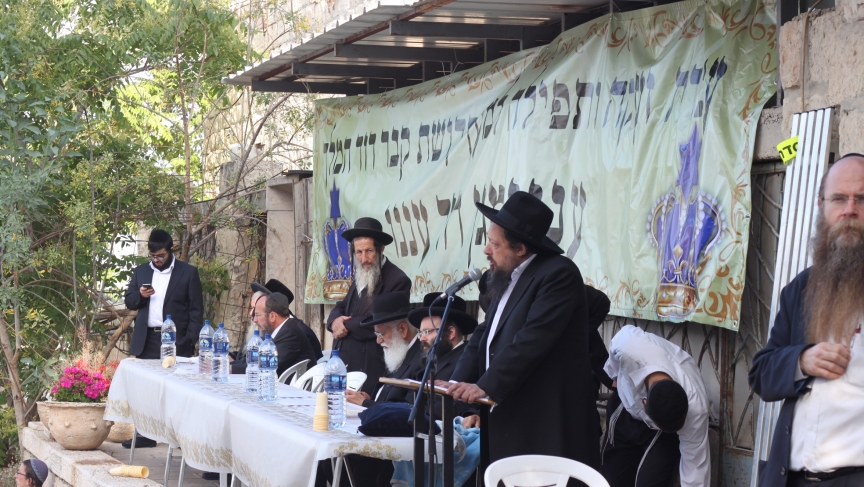 Orthodox nationalist rabbis lead a protest against rumors that Israel will transfer the site of King David's tomb and Jesus' Last Supper to the Vatican.

Pope Francis heads to the Holy Land this weekend. And it's already proving to be a sensitive visit.

Anti-Christian tensions in Jerusalem, the Israeli-Palestinian conflict and centuries of historic Christian infighting are all in the mix for the pope’s three-day trip to Jordan, the West Bank and Jerusalem.

The last stop on the pope’s tour is perhaps the biggest subject of controversy. He will conduct mass in the Cenacle, the room that Catholic tradition says marks where Jesus had his Last Supper with his disciples. Beneath the ground floor of the same building is where Jews believe the biblical King David is buried. For many ultra-Orthodox Jews, that’s a big concern.

“Breaking the status quo will be a problem, because according to Jewish law, Jews will not be able to pray there,” said Rabbi Avraham Goldstein, one of a few hundred who wailed prayers near the holy site last week to protest a rumor that Israel is planning on transferring it to the Vatican.

Ultranationalist Jews are up in arms about the negotiations over the building, and the Pope’s visit in general. Suspected Israeli vandals spray painted graffiti recently on Christian properties in Jerusalem.

“They wrote these words of hate against Arabs and Christians, and demanding Christians to leave the country, and things that really are not nice, to say the least,” said Father Juan Solana, a Vatican envoy in Jerusalem.

Solana runs the Vatican-owned Notre Dame guesthouse, an historic Christian site where the pope will meet the Israeli prime minister. It’s one of the Christian sites targeted by hate graffiti in recent weeks. Police have not caught the vandals.

“I did not see any real action against the perpetrators of these things,” Solana said. “I suppose that, (with) all the security we have in Israel, the police must know who makes these things and can easily find them. So one can reasonably ask if there is really a will and determination to stop this or not.”

Another dilemma for the papal visit is security, said Father David Neuhaus, who is helping organize the visit.

“We need now to negotiate between the way the pope would have liked the visit to be and the way the visit is going to unfold in the real world,” he explained. “The real world into which the pope is coming is a world that is very concerned with his security.”

Pope Francis is a down-to-earth guy, and likes to go into crowds to greet his flock. But Israel wants to keep the pope at a safe distance, because of the very real threat of attack.

Hana Bendcowsky, who is involved in Jewish-Christian relations in Jerusalem, says she has met with Israeli officials about the security arrangements.

“The pope doesn’t like to come in a bulletproof-windows car. He prefers to have direct contact with people. He doesn’t like to feel he’s threatened,” Bendcowsky said. “Since the army, the police, is so worried that something will happen to him, they would avoid allowing people to even look through the window when he passes the streets. So he won’t see even the community or local people of Israel while he’s driving through the streets of the city.”

There are other conflicts Pope Francis will have to navigate on his trip. He’s coming to meet the spiritual leader of the world’s Orthodox Christians, part of an effort to bridge an historic rift between the two churches.

The pope also won’t be able to ignore the Israeli-Palestinian conflict.

He’ll visit a refugee camp of Palestinians who fled or were kicked out of their home in 1948 when Israel was founded. Palestinian artisans made a cross with chunks of cement from Israel’s separation barrier, which they hope to give to the pope.

Pope Francis will also have an audience with a select group of Palestinians. Juliette Bannoura, her husband and young daughters were chosen to be there. She said she’ll ask the Pope to press Israeli and Palestinian leaders to go back to the negotiating table.

“We need to live in peace. Enough is enough,” Bannoura said from her home in Beit Jala, Bethlehem’s sister town. “My mom told me very painful stories about the 1948 war and 1967 war. And seriously, I don’t want to tell my children painful stories too. I want to tell them good stories.”

Tensions, rumors, security concerns, conflicts — it’s a lot for a three-day trip. Even for a pope.