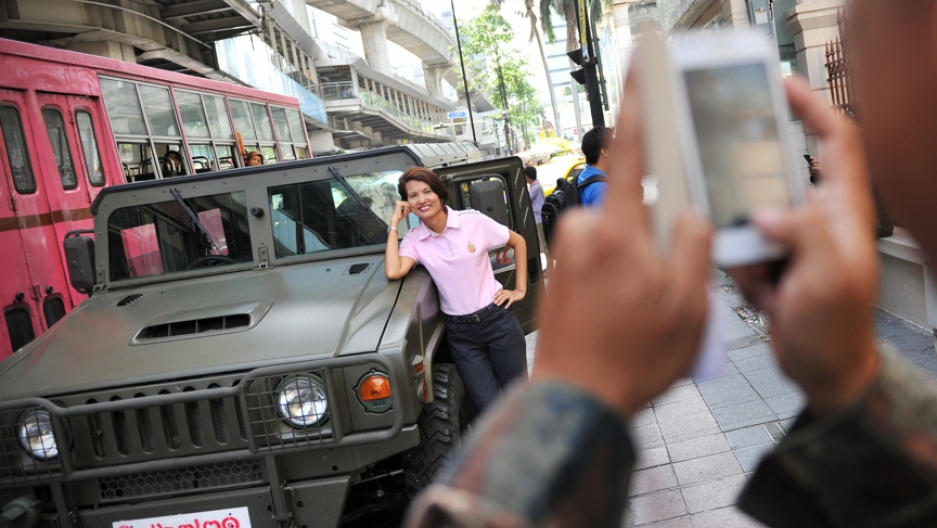 A woman poses for a photo as Thai army soldiers deploy on a downtown street after martial law was declared on May 20, 2014 in Bangkok.
Credit: Rufus Cox
Share

Residents and tourists alike have been snapping selfies with soldiers and tanks in Thailand after the army declared martial law there early Tuesday.

Residents in Bangkok and elsewhere awoke to the news Tuesday morning. Troops and military vehicles were deployed into the streets without notice, giving the army near-unlimited authority to search and detain.

They also can now quell deadly protests that have spilled into the streets with great force and little impunity.

Such dystopian developments, however, didn't phase some residents, who snapped photos of the surreal scenes with their smartphones.

Others even posed with soldiers, who seemed amicable enough.

This guy, described as a "foreign tourist," could be the worst though.

Or maybe these guys.

Actually, no. This Thai soldier smiling while grabbing a semiautomatic weapon might be the worst.

Thailand has seen its share of coups through the years (even though Thailand's army insists this is not a coup). So this is not necessarily a new thing for residents of Bangkok.

And protesters have openly beckoned troops to back their cause for a non-elected council of elites after chasing top Thai politicians out of office. The country's former prime minister, Yingluck Shinawatra, was ousted by courts earlier this month over a minor scandal.

Whatever the situation, these people don't seem worried — at all.

More from GlobalPost: Thailand's democracy is being dismembered, limb by limb