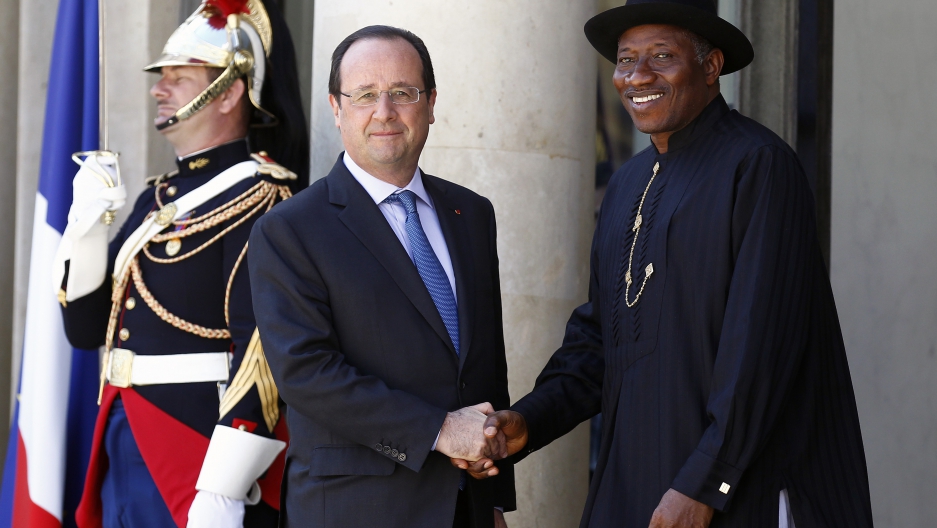 Editor's note: This story was originally published on May 21. It has now been 100 days since the girls were kidnapped from Chibok. Goodluck Jonathan is due to visit their families for the first time today.

ABUJA, Nigeria — Imagine you’re the leader of a powerful nation, and a terrible tragedy has befallen your people — the kind of event so disturbing it draws worldwide concern. The kidnapping of 200-plus teenaged girls by crazed Islamic militants, say.

How do you respond? Obvious steps might include meeting with the girls’ parents as quickly as possible, and immediately going on television to reassure the entire nation that every measure possible will be taken to get the girls home. Try to visit ground zero of the crisis. Maybe don’t be photographed grinning and gleefully dancing.

These are pointers that Goodluck Jonathan, the Nigerian president, seems to have missed in his response to the crisis of Chibok, the town where more than 200 girls, most between the ages of 16 and 18, were abducted from their boarding school in the dead of night. The case has sparked national and international outrage, as well as a global awareness-raising campaign under the hashtag #BringBackOurGirls.

It isn’t just that critics say Jonathan’s administration was slow to act. The president’s wife, Patience Jonathan, initially told reporters that the kidnapping might be a hoax designed to undermine her husband. A day after the kidnappings, Jonathan danced with abandon at a political rally in the city of Kano. Thirty-seven days after the abduction, he has yet to visit Chibok.

After confusing reports emerged that Jonathan was to visit the village last week, he instead jetted off to Paris for a summit on the crisis. Now the president has pledged to find the girls “by whatever measure necessary,” and accepted help from Western governments, but the damage appears to have been done.

Jibrin Ibrahim, a political scientist and #BringBackOurGirls campaigner, said it is “tragic” that Jonathan hasn’t visited Chibok to show empathy and concern for the community, and to get a sense of what is happening on the ground.

“We see American presidents, we see British prime ministers — they take a lot of risks to visit their troops in Afghanistan, and Iraq — they feel, as commander in chief, they should both show their empathy,” Ibrahim said. “The fact of the matter is, my president just doesn’t get it.”

“The president has been very incompetent,” said Clement Nwankwo, executive director of the Policy and Legal Advocacy Center in Abuja. “The president and his team are in denial about what happened.”

But supporters of Jonathan insist it is just a case of unfortunate optics, and also point to scurrilous attacks by political rivals ahead of next year’s presidential elections

Ken Saro-Wiwa Jr., a senior special assistant to the president, said that Jonathan’s motto is “sure and steady,” and admitted his style may be “baffling” to some people.

“But he's emerged through some very trying and difficult processes,” Saro-Wiwa said. “When the pressure is on, he steps back and then acts when you least expect it.”

As a Christian president dealing with a crisis in the mainly Muslim north, there is another layer of sensitivities — including historical baggage — when it comes to Jonathan’s response.

There are also security issues of Jonathan visiting Chibok, a remote village in Borno state, in what is essentially a war zone.

“It gives us a better idea why Jonathan is trying to tread very carefully in this action. You don't rush in with a hammer. Every action has a reaction,” Saro-Wiwa said.

Despite the criticism, Jonathan continues to have the support of many Nigerians. This is a country with little emphasis on political “messaging” and media narratives compared to the United States, for example.

Nnaji Agunechibe, 72, a traditional leader of the Igbo ethnic group, said he trusts his president’s approach toward Chibok in not immediately rushing in with guns blazing, as some suggested he should.

“You know, to rule is not easy. One might be thinking that if he has reacted according to how many have said, maybe worse could have happened,” Agunechibe said. “I believe he has his own methods.”

On the same day that the Chibok girls were kidnapped, a bomb blast in the capital Abuja killed some 75 people. Jonathan visited the bombing site that very day.

“The man was crying. Our president was crying,” said Titus Emeka Okwor, 50, who sells engine oil at a roadside stand next to the bombing site. “I saw him here. He is a nice man. He is trying.”

But leaders of Nigeria’s #BringBackOurGirls campaign, who are planning a march Thursday on the president’s office, say the government has responded with “irritation” to their efforts.

Oby Ezekwesili, a former education minister and deputy president of the World Bank’s Africa division, said she is “surprised” by this attitude from some government officials.

“You get a sense that the fact that citizens have put this on the front burner of everybody doesn’t sit well,” she said.

Ezekwesili said there have been persistent suggestions that the abduction of the Chibok girls was a story amped up to damage Jonathan politically.

“We still have people close to government who say the whole thing about the Chibok girls is a scam — how can you say that? It is pretty disheartening that there should be this position.”