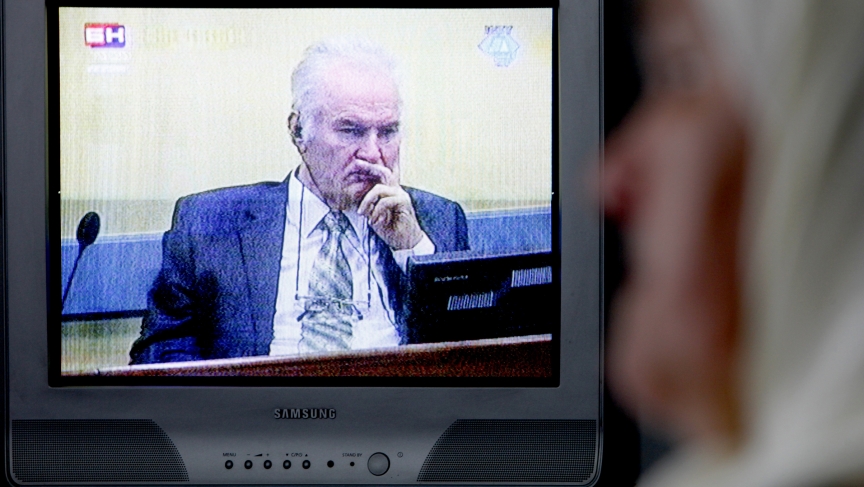 Mejra Dzogaz watches the television broadcast of the court proceedings of former Bosnian Serb general Ratko Mladic's in her home in Potocari, near Srebrenica, May 17, 2012. Mejra's husband, three sons and a grandson were killed during the Srebrenica Massacre in 1995 by a Serbian army unit commanded by Mladic.

Ratko Mladic faces charges of being the military commander behind a series of atrocities committed during the 1990s Balkan wars — including using snipers to shoot civilians and terrorize the residents of the Bosnian capital, Sarajevo.

Mladic is also accused of participating in the massacre of more than 7,000 Bosnian men and boys at Srebrenica — considered Europe's worst atrocity since World War II.

The BBC's Jeremy Bowen reported from Sarajevo in the 1990s and he was called as a witness during Mladic's lengthy trial. Bowen recalls seeing Mladic on many occasions when he was a Bosnian Serb military commander.

"He was a man who, pretty much whenever I saw him, was next to Radovan Karadzic, the Serbian political leader, and he had a fearsome reputation," Bowen says. "He was a professional soldier, and he was the guy behind their military campaign, including things like the siege of Sarajevo."

The war crimes indictment of Mladic runs more than 100 pages. It alleges his complicity in genocide and crimes against humanity. The prosecution rested its case earlier this year and now the defense team has begun to present its case — a process that could take another one or two years. As a journalist who covered the Bosnian war, Bowen has been called upon to testify several times at the International Criminal Tribunal, including in the Mladic trial.

He says Mladic was in the courtroom when he testified "scoffing and making faces of disbelief" as he described attending a funeral in Sarajevo for two children killed by Bosnian Serb gunmen on their way out of the city. When the funeral for the children was shelled by Bosnian Serbs, the mother was badly hurt, "I saw all of that," Bowen says.

Mile Sladoje, a former commander of a Serb battalion in Sarajevo, was the first witness called by the defense on Monday. Sladoje denies ever being ordered by Mladic to target civilians in a sniper campaign during the three-year siege of Sarajevo in which approximately 10,000 people were killed — most of them Muslims.

"All our activities [in Sarajevo] were defence activities. There were standing orders, fire could only be returned in response to enemy fire," he said. "I know nobody gave orders to shoot civilians."

The defense lawyers are also expected to argue that Mladic suffers from a memory disorder, which makes it hard for him to differentiate between truth and fiction.

"He's an old man," Bowen acknowledges. "He was in hiding for a long time and he's not in the best of health. He was quite a vigorous guy when I saw him in Bosnia 20 years ago, now he's diminished by age, but he certainly seems to be mentally competent and he's following what's going on."

When faced with the opportunity to testify at the trial, Bowen says he didn't hesitate for "more than a couple of seconds, because I never testified anything I didn’t report at the time, I wasn't coming out with any secrets. I was absolutely fine about appearing in a court of law and testifying because I feel that it's our duty in a sense. I saw many victims, many dead bodies, piles of dead bodies, dead kids, kids whose parents had been killed, and I think in a way it does give them a bit of redress. "

Bowen has worked for the BBC in and out of conflict zones for nearly 30 years and has covered 18 wars. "My feeling is what we do is very intrusive. But one of the ways I think it makes it justifiable is to, if called upon, to tell the truth about what happened and what you saw.

The BBC’s Anna Holligan, who has been covering the trial in The Hague, wrote that the gravity of the trial hasn't crushed Mladic's proclivity for theatrics.

“Ratko Mladic is famous for his animated appearances. As the judge entered courtroom one, the ageing patriot stood, bowed his head and gave a slow salute. He then placed both hands on his heart and closed his eyes, followed by a quick glance through the bullet-proof glass, perhaps to make sure the journalists were taking note.

Two decades ago, he was a bolshie general, parading the battlefield in army fatigues. Today, he struggles to stand and grasp a thick, plastic-coated pen to make notes, his muscles still suffering from the effect of a series of strokes.

But his character remains intact. As Mile Sladoje told the court, their battalion did not have the "optical-sight" rifles that the prosecution claims were used by Serb snipers in Sarajevo, Mr Mladic nodded in earnest agreement. He enjoys engaging with the audience.

At 72, he has already outlived his superior, former Serbian President Slobodan Milosevic, who died of a heart attack aged 64 while on trial in The Hague.

A few months ago, Mr Mladic forgot his false teeth, and the trial was temporarily adjourned. With at least two years to go, survivors hope his health does not deteriorate further.”

Here's a recap of how we got where we are:

October 2011: Mladic admitted to Dutch hospital and in November found not to be in a condition to follow the trial. This is the first of many suspensions over his health.

April 10, 2013: Mladic is removed from court after muttering during testimony of Srebrenica survivor