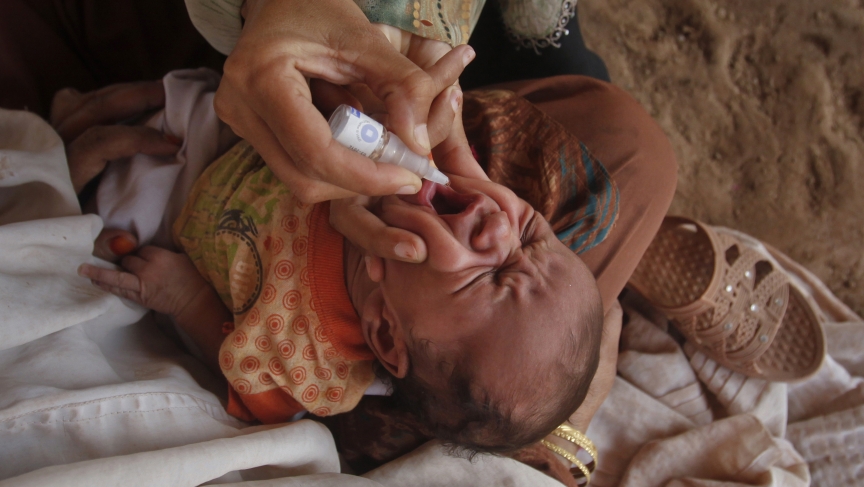 A Pakistani child receives polio vaccine drops in Islamabad. Pakistan is also the only polio-endemic country in the world where polio cases rose from 2012 to 2013.

To understand why some residents of Pakistan are hesitant to let their children get vaccinated against diseases like polio, you need to go back to the hunt for the Islamic militant Osama Bin Laden in 2011.

That's when US intelligence agents used a fake vaccination campaign as cover in Pakistan. The CIA worked with a local doctor there who knocked on the door of the Bin Laden compound pretending he wanted to vaccinate the children living inside.

In reality, he was trying to obtain DNA samples from the family to see whether the CIA had indeed found the Bin Laden home.

The trick failed when the doctor was turned away at the door. And the press attention to the pseudo-vaccination effort led many in Pakistan to distrust anyone who claimed to be innoculating children against dreaded diseases.

Now the White House says the CIA won't be using that tactic anymore.

It's written a letter to US public health schools, pledging that the intelligence agency will stop using vaccination programs as a cover.

Laurie Garrett, a senior fellow at the Council on Foreign Relations, welcomes that pledge, although she's not sure it will make much of difference. She says the CIA's fake vaccination campaign did a lot of damage in several parts of the world.

"There already was a tremendous disinformation campaign going on in the Islamist world, especially in northern Nigeria claiming that vaccine campaigns were all part of some Judeo-Christian-CIA conspiracy to either sterilize the children of the Islamic world or give them HIV infection," Garrett says.  "So using a fake vaccine campaign threatened not only the lives of vaccinators - who would be accused of being involved as co-conspirators - but it also threatened to build on an already pre-existing campaign specifically against polio vaccination."

Garret says even if parents in places like Pakistan don't believe in conspiracy theories about vaccination campaigns, if they live in areas controlled by extremist groups, they may not have a choice.

"The average individual says, 'It's not a question of whether I believe it's true or not, I live under the control of the Taliban so I dare not vaccinate my children,'" Garrett notes. "In other words, it's fear that dominates the narrative."

Garrett says the failure to adequately vaccinate the population of northern Pakistan has helped trigger a reversal of fortunes in the global war on polio.

"The genetic matches of the polio strains that showed up in the sewers of Israel, showed up in the refugee camps surrounding Syria, showed up among children in Syria, showed up in a case in Baghdad, all of this traces back to the northern Waziristan, FATA region of Pakistan," Garrett says. "This is the region most heavily controlled by the Taliban where numerous Taliban leaders and imams have declared fatwas against polio vaccinators."

Earlier this month, the World Health Organization declared that polio had spread to new countries and  become "a public health emergency of international concern."  Garrett says that's in part because radical groups can now point to an actual incidence of a fake vaccination campaign with an ulterior motive.

"We're losing the war, I say because of the combination of the Taliban and Boko Haram extremist views on vaccination, and the CIA inadvertently directly feeding their paranoia and providing them with the evidence they needed," Garrett says.