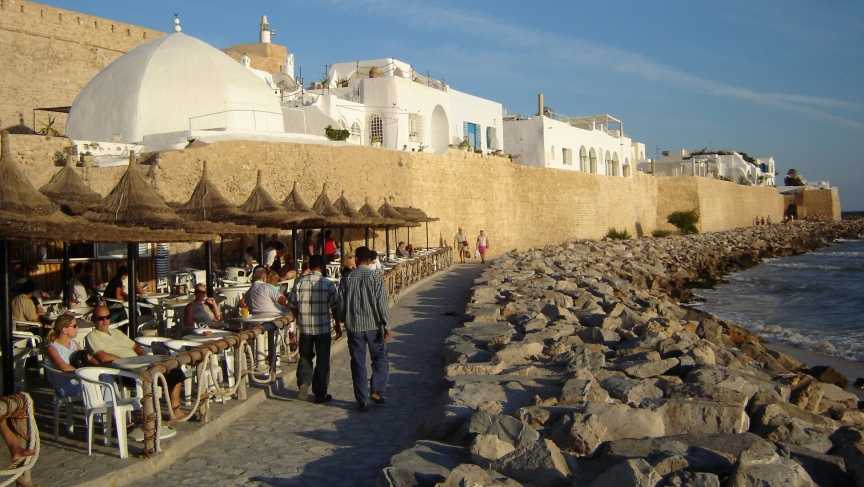 The seaside Tunisia resort of Hammamet is well known for its beaches and nightlife.

The fighting going on now in Libya’s capital is by many accounts some of the worst violence in Tripoli since the 2011 revolution that ousted Muammar Gaddafi.

Lawlessness and clashes between militias have driven scores of Libyans to neighboring Tunisia.

Tunisian officials say up to half a million Libyans live there now.

Abu Ahmed and his family of eight children are some of them. They moved to Hammamet two summers ago.

The seaside town is known among Libyans for its sandy beaches, luxury hotels and wild night clubs. But Abu Ahmed says he just came here for his family to be safe.

Abu Ahmed was a butcher in Zliten, a small town in Western Libya. He says in August 2012, an Islamist militia took advantage of Libya’s instability and overran the town.

Abu Ahmed and his family fled to Tunisia right after the attack. He says what’s especially frustrating is that just a month earlier, he’d voted in Libya’s first free elections.

“I cast my ballot,” Abu Ahmed says, “and then it’s like they took my voice away and forced me out of Libya.”

Tunisia hosted tens of thousands of war refugees during the uprising. They were generally in favor of the revolution, and after Gaddafi was killed, they went back.

But then another wave of Libyan exiles arrived - those fleeing the chaos, like Abu Ahmed – the pro-Gaddafi Libyans, who were terrified about their fate in the new Libya.

Tekbali runs a charity foundation for Libyans in Tunisia. He says he’s helping all the Libyans in need, and so should Libya’s new authorities. Instead, they are ruling the country with the same old “with-us-or-against-us” mentality as before.

“Before, in the time of Gaddafi, we can not say, ‘Gaddafi is wrong,’” Tekbali says. “And now you make the same mistake. If someone like Gaddafi, he has to say it, why not? You like Gaddafi it’s okay, it’s your land. Free speech, this is democracy. That’s why we make revolution.”

In Libya’s new penal code, any criticism of the revolution or insult to the Libyan state or flag can land you in jail. But with militias ruling the streets, it sometimes takes even less than that to get in trouble.

Another man, Ahmed, says he was accused of being pro-Gaddafi just because his grocery store was in the wrong spot. And so he fled too.

“I was just a civilian, but my shop was right next to a military base. Once rebels reached Tripoli, they stormed the base, came to my store and accused me of selling food to the army. It was a grocery store. Of course, I sold food to them. I sold food to everybody. But in their eyes, I had aided and abetted the enemy. They burned down my shop, then my house. I had to leave and took my family here,” Ahmed says.

Ahmed has no job in Tunisia, and little savings left after nearly three years in exile.

Last month, a group of Libyan officials came to Tunis and promised refugees like him they’d be safe if they were to move back.

Ahmed says the officials can’t even protect themselves, so what could they possibly do for him?

“Every day in Libya, there’s more killings, more kidnappings. How can they tell us to come back and promise to protect us? Militias have managed to kidnap the Jordanian ambassador, even the Prime Minister, so how couldn’t they kidnap and hurt regular citizens like us?” Ahmed asks.

Ahmed says he’s lost hope he’ll ever be able to go back.

And he actually can’t go anywhere else. A few months ago, his passport expired. Libyans in Tunisia have to travel to Tripoli to get it renewed.