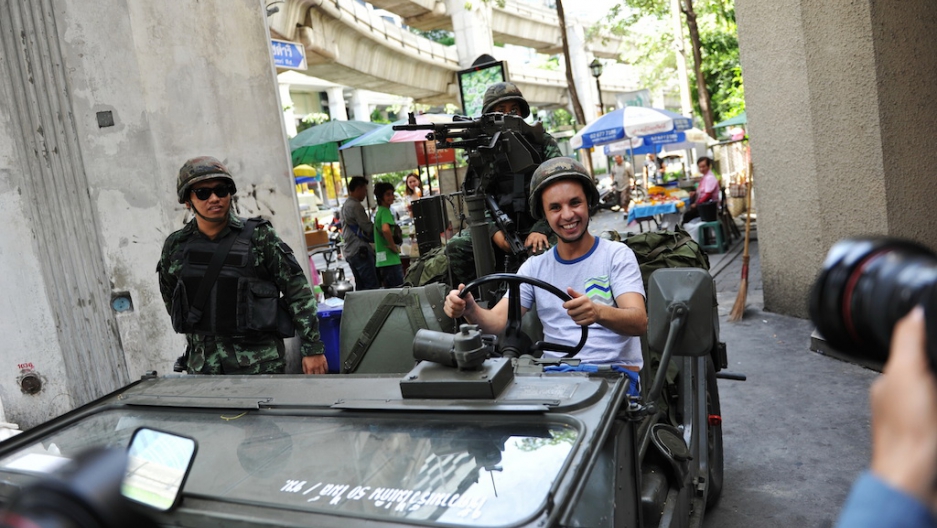 A foreign tourist poses for a photo as Thai army soldiers stand guard in Bangkok, Thailand on May 20. The army imposed martial law across Thailand today, but denies that the move constitutes a coup d'etat.
Credit: Rufus Cox
Share

GREENSBORO, North Carolina — In many troubled nations, coups are quick and bloody affairs. But Thailand is now witnessing a slower breed of coup in which an elected government is dismembered bit by bit.

In declaring nationwide martial law, the Thai army has just hacked another limb off Thailand’s sickly democracy. Without notifying the government, troops have been deployed to the capital’s streets with near-unlimited authority to search and detain — and to quell protests with great force and little impunity.

Televised announcements seek to reassure the public that “this is not a coup,” an ominous refrain heard in advance of past military takeovers. And there have been plenty: 18 attempted and successful takeovers since the direct rule of kings ended in the 1930s.

Thailand’s army chief, asked by Thai reporters if martial law required government consent, shot back, “Where is the government?”

Thailand’s elected party, Pheu Thai, is indeed scattered and weak. The party has had a rough six months.

The former prime minister, Yingluck Shinawatra, was ousted by courts earlier this month over a minor scandal. The party's top politicians have been chased out of their offices and threatened by a self-declared “people’s coup” movement. The protesters openly beckon troops to back their cause: replacing an elected government with a non-elected council of elites.

When Pheu Thai was expected to triumph in elections in February, the movement sabotaged the election by mobbing polling stations and attacking voters. The election was voided by courts. Despite belonging to a political network that has won every Thai election in the 21st century, Pheu Thai has been stuck in “caretaker” status with stripped authority.

Combined actions by unelected institutions — the courts and the army — have left Thailand chaotic and rudderless. New elections have been repeatedly delayed by an election commission favoring anti-government protesters.

The government has been slowly flayed and, under martial law, the military appears to be calling the shots.

“Thailand’s friends in the world’s capitals should make it clear that they expect this de-facto coup to be reversed immediately,” said Brad Adams, Asia director at Human Rights Watch. He warned that the military now has “unlimited authority to violate human rights if they are so inclined.”

The White House has also expressed skepticism: “We understand the Royal Thai Army announced that this martial law declaration is not a coup,” said US State Department spokeswoman Jen Psaki. “We expect the army to honor its commitment to make this a temporary action to prevent violence and not undermine democratic institutions.”

With the military effectively at the reins, Thailand faces two scenarios. Each will help determine whether the nation — which has vacillated between dictatorship and weak democracy for decades — has a future in which voters are allowed to choose their own leaders.

The first scenario would see the military mediating between the two warring factions. On one side: Pheu Thai, a political network that has proven unbeatable at the polls. Their success relies on populist policies that please the working and provincial classes. On the other: an entrenched old guard, backed by powerful courts and generals, that has railed against democratic outcomes that shift power from the capital to the countryside.

This struggle is hardly black and white. Both sides have a corruption problem. Both sides are guided by wealthy families; Pheu Thai is effectively helmed by tycoon Thaksin Shinawatra — Yingluck's brother — who relocated to Dubai to skake a corruption conviction.

Both sides are also backed by protest factions that, while largely unarmed, are connected to shadowy elements capable of deploying violence.

There are also hints that the divide touches the the top reaches of Thai society. Many within the pro-government faction, the Red Shirts, have embraced Thailand’s crown prince; the faction seeking the government’s ouster exhibits a fondness for the eldest princess.

Ruling governments in Thailand must be blessed with a royal decree before taking power. Thailand’s 86-year-old king, the world’s longest reigning monarch, is in poor health. Open discussion of royal intrigues is limited by laws that can imprison anyone deemed insufficiently reverent of the monarchy.

The army has vowed to bring all sides to the negotiating table. But the military is no impartial mediator. For decades, its coups and meddling have kept elected parties weak and easily undermined. The constitution, written under army rule following a 2006 coup that ousted then-premier Thaksin, gives courts authority to throw out parties and politicians for minor offenses.

But the army is among the few forces powerful enough to enforce a negotiated compromise — ideally one that leads to a new, sabotage-free election.

The other scenario: the military uses its might to help install an unelected premier under the dubious banner of “neutrality.” The generals may “push for a pseudo-legitimate process that replaces the care taking government with transitional guarantees for the traditional elites,” said Verapat Pariyawong, a legal scholar who has previously advised the government.

But this outcome carries grave risks. The Red Shirts, currently camped out near Bangkok under army supervision, have vowed to fight back against the installation of any non-elected prime minister.

Elements of the Red Shirts previously told GlobalPost that they have sized up the weapons savvy of its men and drawn up plans to secure arms if necessary. This threat may be discouraging a historically coup-happy military from staging an all-out putsch. Given the depths of Thailand’s rift, it is highly doubtful all military divisions will line up behind the decisions of the top brass.

Thailand finds itself in a depressing yet familiar situation in which the military — not the masses — has the prime authority to chart the nation’s outcome.