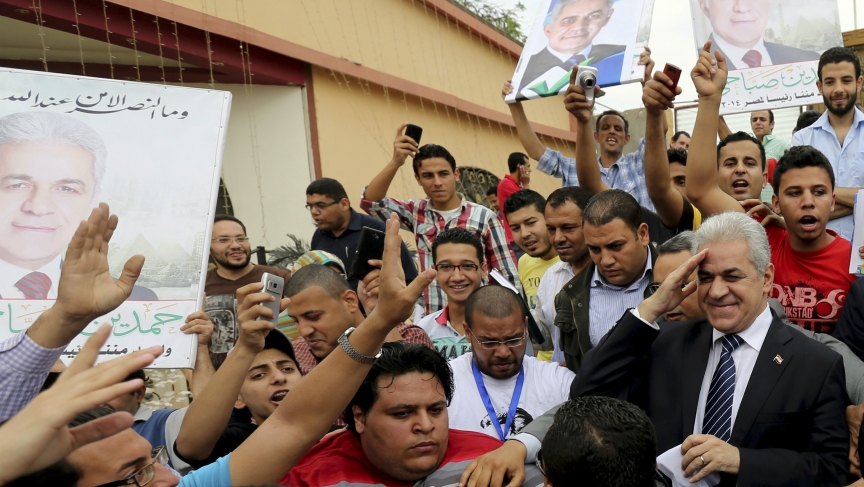 Egypt's leftist presidential candidate, Hamdeen Sabahi, center, gestures before a rally in Banha, northwest of Cairo. Egyptians will vote in presidential elections on May 26 and 27.

How do you run an election against a candidate whose victory is all but assured? Egypt will hold presidential elections at the end of May, and Abdel Fattah al-Sisi, the former defense minister who ousted the country's Islamist president last summer, is widely expect to win.

But he’s not alone in the race.

Hamdeen Sabahi is the other candidate for Egypt's presidency, and he’s been out on the campaign trail. On a recent day, he was speaking to a room of about 1,000 supporters in the northern town of Zagazig.

Two points in Sabahi's speech get the biggest applause — including when he says, “The day is coming when all those imprisoned for peacefully expressing their opinion will be free,” and then names several local young men who are in prison.

Sabahi has promised to amend a law that restricts the right to protest, which has sent thousands to jail.

Sabahi, a leftist who supports the socialist vision of Egypt’s former president, Gamal Abdel Nasser, has a long history of opposition politics. He was a critic of the Mubarak regime and was himself arrested many times.

The other time the crowd roared was when Sabahi declared, “The Egyptian army is not above us, above the people. The army protects and serves the people. It doesn't rule!”

Sabahi supported the uprising against Hosni Mubarak in 2011, and then the revolt against the next president, the Islamist Mohamed Morsi. Sabahi backed the army's intervention — he and his supporters would never call it a coup — to remove Morsi in the summer of 2013. He also backed the crackdown on the Muslim Brotherhood that followed. Egyptian authorities have designated the group a terrorist organization and have detained thousands of its members, and killed hundreds of protesters.

According to Mohamed Haiba, a coordinator of Sabahi’s campaign, the candidate and his supporters respect the army. But Haiba says the way Sisi has taken personal credit for "saving" Egypt from the Muslim Brotherhood last year and the way he stayed in power when he was planning to run for president was wrong and unfair.

“Sisi played a role in bringing down the Brotherhood, but we reject the fact that he was in power during the transition and then, when it suited him, he took off his uniform and put on a suit and said: I'm a civilian and I'm running for president," Haiba says.

This isn’t the first time that Sabahi has run for president of Egypt. He came in third during the 2012 presidential election — the one that Morsi won.

But this time around, Sabahi’s campaign had trouble even gathering the required 20,000 citizen signatures. Haiba says people were scared to put their names down.

“One of the problems we faced is that people would say ‘I'll vote for Hamdeen Sabahi, but I don't want my name registered.’ It's fear. The gains we made in the revolution, we've lost them now,” Haiba says.

Other candidates from the last elections have declined to run this time around, saying their presence would only legitimize an unfair election. The Muslim Brotherhood and grassroots activist groups like April 6, which spearheaded the revolt against Mubarak, have called for a boycott.

So that just leaves Sabahi, running against a candidate who in many respects acts like he's already president-elect. The Sabahi campaigners complain of their rival's "arrogance" — Sisi won't take part in a debate; he doesn’t give live interviews; and his public appearances are tightly stage-managed.

Still, Sabahi's supporters insist that their man has a real chance.

“It's not settled,” says Radwa El Darandari, a campaign volunteer. “Every day things are turned upside down.”