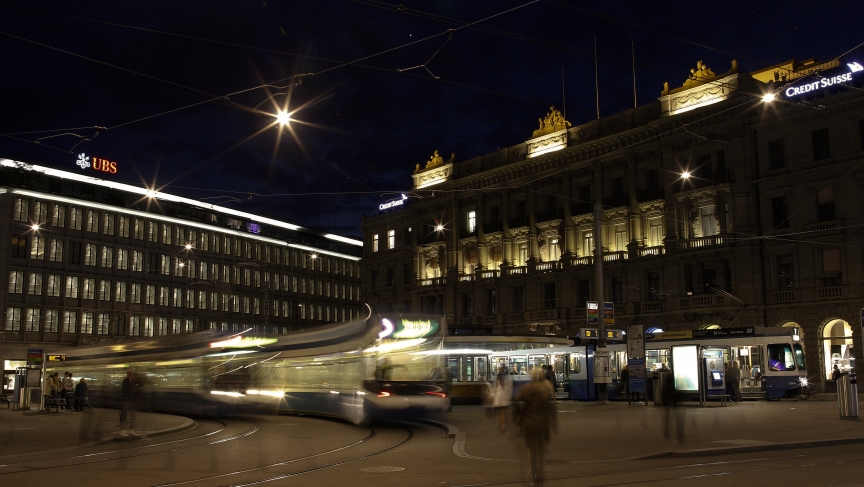 A Credit Suisse office in Zurich, Switzerland. Will the $2.6 billion fine make them stop?

The Swiss bank Credit Suisse, pleaded guilty Monday to charges of conspiring to aid tax evasion. As a result, they've been fined $2.6 billion by the US Department of Justice. The bank's shares went up on Tuesday.

“But you have to think about this in a broader perspective,” says Mark Blyth, a professor of political economy at Brown University. “When you’re doing this, what you’re actually doing is international money laundering … In order to do this, you actually have to bust through several anti-money laundering and anti-terrorist conventions, and that’s where the criminal liability comes in.”

Credit Suisse was accused of recruiting US clients to open accounts, and helping them conceal the accounts from the Internal Revenue Service. Their staff and managers actively helped wealthy Americans manage their secret accounts.

A Senate investigation found at least one example where a Credit Suisse employee handed secret bank statements to a customer hidden in a copy of Sports Illustrated. Others carried huge amounts of cash to clients in different parts of the world.

The bank has now promised to stop helping its US clients manage their accounts through such secret practices. Credit Suisse has also agreed to accept independent monitoring of its conduct for up to two years.

"We deeply regret the past misconduct that led to this settlement," Credit Suisse chief executive, Brady Dougan, said in a statement on Monday. However, the bank is not obliged to release the names of its estimated 22,000 US clients. These clients are believed to be worth $10 billion.

But Blyth goes on, “Okay, so it’s a criminal indictment. Who’s going to jail? And the answer is: nobody. Because hundreds of people were involved and you can’t possibly jail the whole bank.”

The fine is not sufficient to seriously hurt Credit Suisse, Blyth believes. “It sounds like a lot of money to a normal person. But to a hugely leveraged financial institution, it’s really not that much.”

Blyth believes the world has missed the opportunity presented by the global financial crisis of 2007 to downsize the banks. He argues that the world’s banks remain “too big to fail.”

“Unfortunately,” he adds “that means they’re also too big to jail.”

Blyth's view is only one side of the story.

In Switzerland, breaking banking secrecy laws can mean fines and up to three years in jail.

The Swiss authorities have responded to US complaints by defending that nation's laws, which have maintained bank secrecy for hundreds of years. That's left Credit Suisse between two conflicting legal codes.