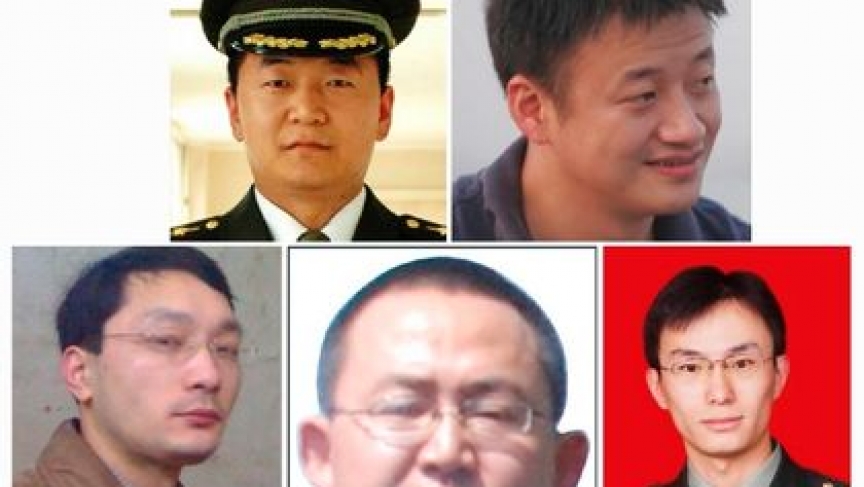 A photo provided by the FBI shows the five Chinese military officers who the US has accused of cyber espionage. They are, clockwise from top left, Sun Kailiang, Huang Zhenyu, Gu Chunhui, Wang Dong and Wen Xinyu.

Courtesy of the FBI

The official reaction from Beijing was furious. When the US Justice Department indicted five Chinese military officers for cyberattacks against American companies, China accused the United States of hypocrisy, arbitrariness and making up facts.

Beijing went even further, warning the Obama administration that it is violating international law and badly damaging the US-China relationship. Nothing in the content of China's rhetorical broadside was particularly surprising, though.

But Isaac Stone Fish said the speed at which the official reaction sprung forth after Monday's news broke was noteworthy. Stone Fish is Asia Editor at Foreign Policy magazine.

“As soon as the indictment came out,” Stone Fish said, the Chinese defense ministry quickly put out a tough statement denouncing the Americans' charges of “so-called cyber theft” against members of China's military.

“The Chinese knew about this,” Stone Fish reckoned. "I think the Obama administration gave [Chinese officials] the courtesy of letting them know pretty far in advance.”

Beijing's decision to summon Washington's new ambassador in China, Max Baucus, to a diplomatic dressing down, and from an assistant foreign minister, was probably intended to convey a sense Chinese annoyance. But Stone Fish said it is difficult to predict what sort of substantial actions the Chinese might take in retaliation against the US.

The People's Liberation Army is one of the most opaque branches of the Chinese state, Stone Fish said. “I think they are going to retaliate, but exactly how and exactly when is almost impossible to say.”

Some experts think that neither Beijing nor Washington will want to let this cyber spat escalate into anything serious.

But if it so chooses, the PLA has options. It could launch cyberattacks against the Pentagon. It could slow down military-to-military cooperation with the United States by refusing to give American officers visas to visit China. Or, its people could hack American companies.

“Maybe they'll do absolutely nothing and then, six months from now, launch a massive cyberattack on Boeing or a major US weapons producer,” Stone Fish postulated. “Again, it's very hard to say.”

One small retaliatory step came yesterday. “China has already announced the suspension of co-operation with the US on an Internet working group. And once it has had time to digest this loss of face, it is likely to consider more serious retaliation,” writes BBC China editor Carrie Gracie.

That could include China reciprocating by issuing some indictments of its own against US officials. For example, what if Beijing charges the NSA's former director, Keith Alexander, of cyber crimes? That appears unlikely though, because it would require providing some proof of American hacking activities and China has not been willing or able to do that yet.

In order to build its case, the 56-page indictment filed in a US district court in western Pennsylvania presents specific incidents of computer hacking allegedly committed by the suspects.

Based on information from documents provided by former NSA analyst Edward Snowden, the US government hacked into the computer networks of the Chinese telecom company Huawei. What is not clear, though, is precisely why? “We don't know how or if,” Stone Fish said, “the US government shared secrets that it learned from Huawei with American companies in order to give these companies a competitive advantage.”

The Obama administration maintains that American cyber espionage activities are about protecting US national security, while China is engaged in economic espionage — aimed at helping Chinese companies, including state-owned enterprises. The Chinese government, however, is not making that distinction.