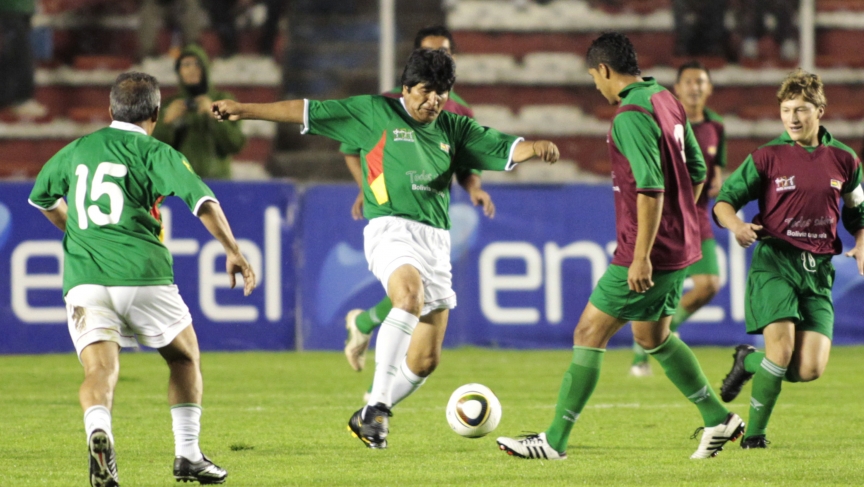 President Evo Morales of Bolivia playing in a friendly match in La Paz in 2011.

What if President Obama joined the NBA's Washington Wizards? At 52, the president is in pretty decent shape and he plays hoops in his spare time. So why not?

Well, Obama might want to give that some thought, after he hears what Bolivian President Evo Morales is up to. Morales has just been offered a contract to play professional soccer in Bolivia's first division championship.

The former coca leaf grower is 54, which is a little old for a pro. And it's not every day that a president plays pro in any sport, no matter at what age. But this isn't totally out of the blue for President Morales.

"Evo Morales is known as an absolute football fanatic," says BBC South American soccer analyst Tim Vickery. "He's also known to play a little bit. He played a very high profile game a few years ago, right at the top of a mountain, to prove that football can be played at altitude."

Still, Vickery thinks this is probably no more than a publicity stunt for Sport Boys Warnes, the team that Morales will be playing for.

“On the one hand, yes, for our club it is,” Club president Mario Cronenbold told the BBC's Newshour. "On the other hand, we're fulfilling a dream of our president who loves football, and who has never stopped playing. And he's playing well, he plays good passes, has good control of the ball and a strong shot with his right foot."

But let's not get carried away. Cronenbold says he's not expecting Morales to win his team the national title. He also points out that Morales is signing a contract with Sport Boys only because he has to.

He says that in Bolivia, any player who joins a professional soccer team must have a contract. And, that Morales will only be paid minimum wage, which in Bolivia is the equivalent of $215 a month.

But Morales will get to play in his preferred position, as a midfielder. And he'll get to wear the coveted Number 10 shirt as well (the Number 10 jersey is usually worn by the best player on a team).

President Morales has played high-profile games before. Most were friendly games. But some turned ugly.

In one match, the president was thought to have kneed a player on the other team. In another game, there were two red cards, and police reportedly tried to arrest a player after he committed a particularly bad foul against Morales.

But Cronenbold says when Morales plays for Sport Boys, things will be different.

Sport Boys Warnes is not one of the Bolivia's top soccer teams. This season, it’s in 9th place in the country’s 12-team league.

And no one is expecting Morales to line up for every game. Cronenbold says he'll play just a handful of matches, whenever his busy schedule allows. And each time he'll play only 15 or 20 minutes.

Which does make one wonder ... what's the point? Publicity for the team, yes. But what's in it for Morales?

Did I mention President Morales is up for re-election later this year?

Tim Vickery points out that Sport Boys is based in Bolivia's lowlands region, where Morales could use a popularity boost.

"His stronghold is much more the highland areas of Bolivia,” said Vickery. “So currying a little bit of favor in the lowland areas might do him some good in electoral success."

President Evo Morales has a few more months to get in shape for his new gig, or gigs. The next soccer season in Bolivia starts in August. And, the presidential election is scheduled for October.