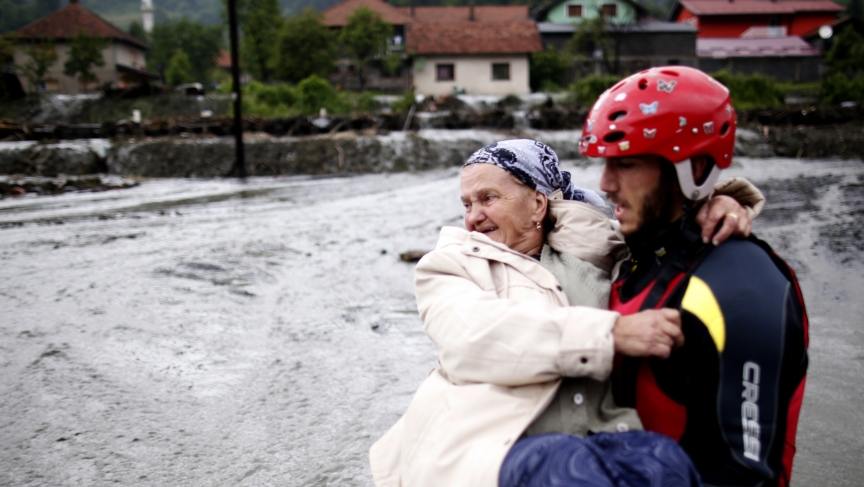 A member of the rescue team carries a women as they leave her flooded house in Topcic Polje, near Zepce. The heaviest rains and floods in 120 years have hit Bosnia and Serbia

It's being called one of the worst floods in a century. After nearly a week of heavy rain, the Sava River has flooded the Balkans — from Serbia and Croatia to Bosnia-Herzegovina.

At least 35 people have died and tens of thousands in Bosnia alone have been displaced from their homes. And there's a new menace.

Mudslides and flood waters have uncovered and shifted thousands of landmines leftover from the war in Bosnia between 1992-1995.

In many ways, it is like the days right after the war, says Ahdin Orahovac, “with the same consequences — no infrastructure, no electricity, no water, and more minefields."

Orahovac is the deputy director of the Bosnia Mine Action Center in Sarajevo. At the end of the war, he says, there were nearly two million unexploded mines. Over the past 19 years, Orahovac and his team have worked to excavate and detonate thousands of those mines.

Still, he estimates around 120,000 unexploded mines are left in the region. So the danger remains, says Orahovac. This year has already seen eight mine accidents in Bosnia-Herzegovina.

“The main problem in Bosnia is how to find the mines,” he says, a problem that the new  flooding has made worse. “Now it is more complicated because all that we cleared has been disturbed. Now, we have to create new procedure on how to find mines, especially in the landslide area. And we have to act immediately."

When the Sava River flooded five years ago, residents found landmines around their homes after the flood waters receded.