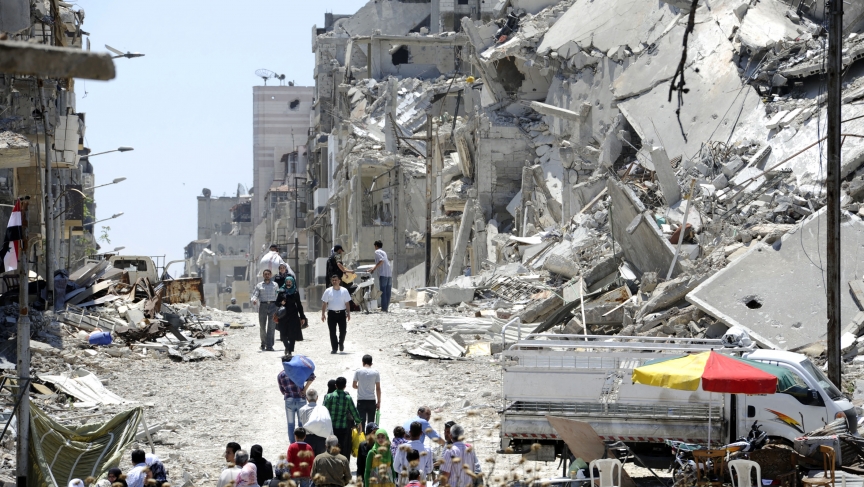 Residents arrive on foot to inspect their homes in the Wadi Al-Sayeh district of Homs, May 14, 2014.

A two-year battle for the Syrian city of Homs came to an end in early May with the evacuation of the last rebel defenders.

Now residents are emerging from their shelters to see what's left of their homes. Among them are the relatives of Soumer Daghastani.

Daghastani works for the BBC Arabic service in London, but feels a close connection with Homs. He spent every summer there as a kid and as a young man, visiting his grandparents, aunts, uncles and cousins. Then came the war.

Rebels seized large parts of the city in 2012, including the neighborhoods where Daghastani’s relatives lived. The government went on the offensive, pounding these areas with heavy artillery, mortar bombs and air attacks.

Daghastani's relatives had to flee. Those who could afford it went to Damascus or even abroad, to Turkey and Jordan and beyond. But most stayed and relocated to government-held areas, which were a little safer.

Daghastani says it has not been easy to communicate with this extended family. “Most of the telephone lines have been cut. Sometimes you can get through. But we manage to stay in touch, mostly through the Internet.”

He says it’s been stressful for him. “It’s awful because I sit in the newsroom. I receive all the news about the bombardments, the shelling, the explosions.” He says he feels helpless.

Whenever he heard of anything, Daghastani called to check on his family. They usually reassured him by saying "Oh, it was a few meters away, or in the next street. Yes, a relative’s house was destroyed, but they’re okay."

But not every time.

His aunt and her little daughter — Daghastani’s cousin — were shopping in a vegetable market when a shell fell into the crowd. Both were wounded.

When he found out, Daghastani called and was put through to his 7-year-old cousin in the hospital, and she started telling him what happened saying, "Yeah, we were there, and I was injured and they took us to the hospital. It’s just a little wound. Seven stitches. No big deal."

Daghastani says he was almost in tears. He says his cousin is “such a strong girl.”

“It’s just awful that these people, my relatives, a child, would have to go through this," he says. “But they are resilient.”

The heavy fighting devastated his family’s former homes and their entire neighborhoods.

After the rebels left Homs earlier this month, his family has been able to get out to see what’s left of their former lives.

His aunt found that two shells had hit her home. It was in ruins. All the furniture and valuables were looted long ago. But she started digging through the dirt and rubble, looking for anything.

Daghastani says she was so happy to find some photos. Back in 2012, she had fled in a hurry, leaving everything behind. Now, once again, she has pictures of her three boys when they were kids.

Another cousin, Daghastani says, found a picture amid the rubble of his home, showing his parents when they were on their honeymoon. “He was thrilled to find this,” he says.

Daghastani doesn’t get into politics, but says his relatives all come from areas where there was strong support for the protests against the government of Bashar al-Assad. “Now they feel defeated,” he says.

He says they feel they paid an “extraordinary price” and “they feel it was for nothing. Because in the end, … the government is controlling the city again.”

But he adds, “they still feel it’s their city. They love it strongly. And they’re going to rebuild it again. But for now, there’s just relief that the fighting has ended. 'We just have some time for rest.'”

Daghastani says he would love to go back “to see the places where I played as a kid, to visit my grandma’s grave.” But he’s scared.

“I’ve seen all the images from the city,” he says. “And it’s a city I can’t recognize anymore. I mean, I’m trying to draw a map of the city in my mind, and I just can’t. I just see all this destruction.”