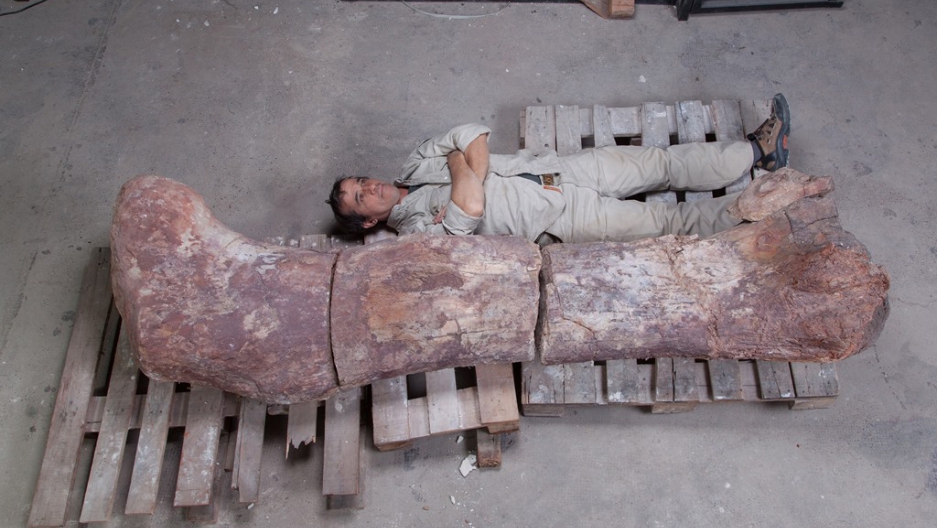 Paleontologists in Argentina claim they have discovered fossils belonging to the world's biggest dinosaur.

A species of titanosaur, the creature towered over other dinosaurs. The scientists belive it stood more than seven stories tall and weighed as much as 14 African elephants (170,000 pounds). It was about 130 feet long from head to tail.

In other words, it was huge.

"Given the size of these bones, which surpass any of the previously known giant animals, the new dinosaur is the largest animal known that walked on Earth," researchers Dr. Jose Luis Carballido and Dr. Diego Pol told the BBC.

The bones are much larger than the current biggest dinosaur on record, Argentinosaurus.

They were found by a local farmer near the central Argentine town of El Sombrero, then excavated by a team from Argentina's Museo Paleontologico Egidio Feruglio.

Although the herbivore has yet to be named, scientists believe it wandered the forests of Patagonia about 95 million years ago, during the Cretaceous Period.

It had a long neck and tail, which was believed to be used as a weapon against predators.

Teams unearthed seven of the dinosaurs at the site — about 150 bones in total — all in "remarkable condition," according to scientists.

Surprisingly, this is the second major titanosaur discovery of 2014.

In January, a team of scientists from Pennsylvania uncovered fossils belonging to the Yongjinglong datangi during an excavation in China. At 60 feet long, it's more of a medium-sized titanosaur.