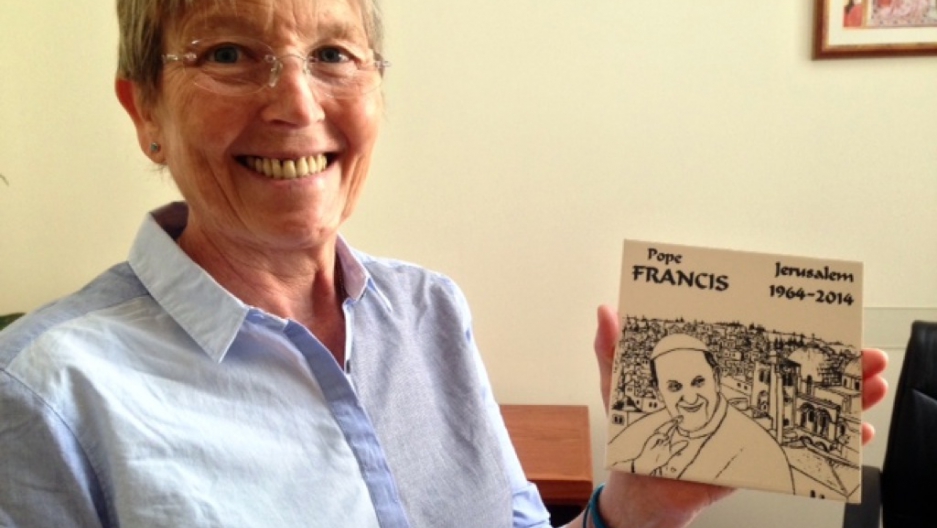 Doni Ferrari, assistant to Fr. Pierbattista Pizzaballa, the custos of the Holy Land, hold a commemorative ceramic tile fired up for the visit by Pope Francis.
Credit: Noga Tarnopolsky
Share

JERUSALEM — On Saturday, Pope Francis will travel to the Holy Land to commemorate the end of the Great Schism — which, despite its evocative name, is not another episode of Game of Thrones.

In 1054 Michael Cerularius, the patriarch of Constantinople, frustrated by longstanding disputes with the Latin pope, cut ties to Rome and proclaimed the independence of a Christian tradition that would come to be known as the Eastern Orthodox Church. Between that moment and 1964, when Pope Paul VI embraced Patriarch Athenagoras in a small Jerusalem room, the Roman Catholic and Eastern Orthodox Churches were not even on speaking terms.

Pope Francis, one year into his term, is following up on Paul VI's grand gesture with the unprecedented inclusion of a rabbi, Abraham Skorka, and an imam, Omar Abboud, in his personal entourage. Both are long-time personal friends of the pope from his days as cardinal of Buenos Aires.

But the highlight of the pilgrimage, which will take place from May 24 to 26, almost 50 years to the day since the encounter between Paul VI and Athenagoras, will be a ceremony at Jerusalem's Church of the Holy Sepulchre — where, in the presence of representatives from all thirteen of Jerusalem's traditional churches, Francis and Patriarch Bartholomew I will, in a manner of speaking, renew their vows.

The Holy Land has been getting ready for Pope Francis for months. Below, some examples of the preparations, including exclusive photographs of the room in which the two leaders will meet and the quarters in which the pope will be lodged.

1. A banner welcoming Pope Francis is seen in March at the Old City’s New Gate.

2. The church is gearing up for the papal event with a major PR operation, including this rockstar-like website:

3. Every inch of the Apostolic Delegation, where the pope will spend his one night in Jerusalem, is being spruced up — even the back corridors by the kitchen.

4. The stairs leading to Nuncio's bedroom, where the pope will spend the night. "It has a single bed, a chair and a table," Lazzarotto explains. "I was told not to change anything, but to leave it simple for the pope." Lazzarotto will move into an assistant's bedroom for the night.

5. Sonia, the assistant to Apostolic Nuncio Archbishop Giuseppe Lazzarotto, shows GlobalPost the altar of the chapel in which Pope Francis will say his private prayers.

6. The chapel at the Apostolic delegation.

7. This is the seat upon which Francis and Bartholomew, the patriarch of Constantinople, will sit for the symbolic meeting of Catholic and Orthodox churches. The silk velvet upholstery was donated by a local Christian fabric merchant. It’s new, and Francis will be the first pontiff to sit upon it.

8. The view from the foyer of the building where the meeting will take place.

9. An icon etched in gold and silver, handmade in Greece, which the patriarch of the Holy City of Jerusalem and all Palestine, Theophilus, will present to Pope Francis on his visit to Jerusalem. It has been hung in the room in which Francis and Bartholomew will first meet.

10. On an adjacent wall, a photograph of the historic encounter between Pope Paul VI and Ecumenical Patriarch Athenagoras in May 1964. This was the first meeting between Latin and Orthodox church leaders since the schism of 1054. Francis and Bartholomew's summit, almost fifty years later to the day, will take place in the same modest chamber.

12. The private courtyard visible from the room where the two popes will meet.

13. Doni Ferrari, assistant to Fr. Pierbattista Pizzaballa, the custos of the Holy Land, shows GlobalPost a commemorative ceramic tile fired up for the occasion.

14. As a native Argentine residing in Rome, the pope is pretty much certain to love espresso: here, the custos's embossed demitasse.