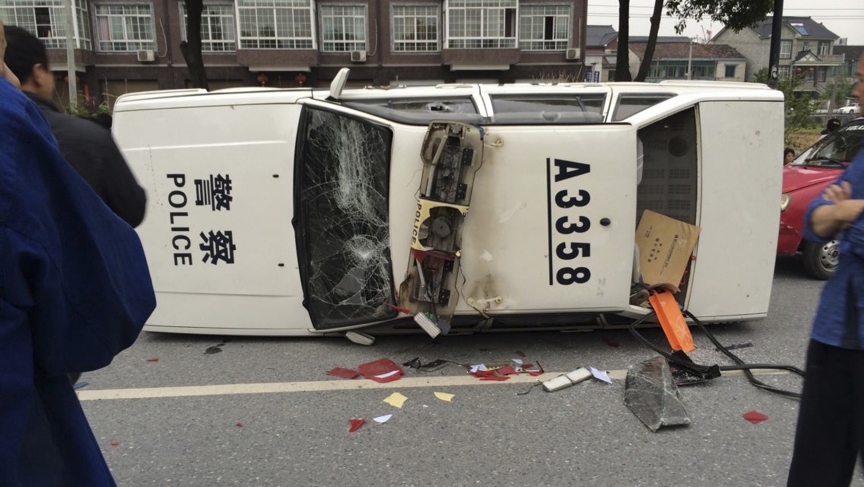 A police car is seen smashed and overturned as demonstrators protest against the construction of a waste incinerator in Hangzhou, China.

When people in the city of Hangzhou got wind of plans to build a new trash incinerator, their response was swift. They drew up a petition to halt the project. Then they hit the streets, in violent protests that began last weekend outside of government offices and near the site of the planned incinerator.

Protesters said they were afraid that pollution from the massive facility would endanger the health of hundreds of thousands of residents. At least 39 people were reported injured at the demonstrations, two of them seriously. Dozens of vehicles were damaged.

Police cars were overturned, which is not the sort of thing one might expect to see in an authoritarian state with a zero tolerance policy toward unauthorized public protest. It speaks to the level of frustration and mistrust that the Chinese public must be feeling toward the officials they blame for China's environmental woes.

People have every right to be angry, after years of lax regulations and go-for-broke economic policies that have contributed to major pollution problems. But that doesn't change one of the big, but lesser-known, challenges. The country just generates too much trash.

“It's remarkable, and it's remarkably disturbing for a developing country,” says Adam Minter, a Shanghai-based columnist for Bloomberg View and the author of Junkyard Planet.

Minter is quick to point out that Americans still produce far more trash per capita than people in China. But the sheer amount of its solid waste poses an enormous dilemma for a nation that is already struggling with a shortage of arable land. Expanding landfills is not a desirable option, so China is turning to incineration as part of the answer.

The Chinese government has been building new trash incinerators for the last several years. It's a smart approach in one sense. But it might be exacerbating another, much more publicized environmental problem in China: air pollution.

Regulations allow operators of Chinese incinerators to run their facilities under the guise of “waste to energy" plants, which gives them significant leeway when it comes to their pollution emissions. “The waste is burned and the heat is turned into energy,” Minter says. “In a sense, they're small power plants. And because of that, there's a loophole that allows them to burn coal.”

In that way, Minter says, “they become very dirty coal-burning power plants with some trash thrown in.” The public in China is aware of this. Hence, the anger that fuels protests like the recent ones in Hangzhou.

Now, a great deal of the solid waste in China, it turns out, is food. Some reckon that up to 70 percent of the material going into Chinese landfills is food that has been tossed out. And that is one reason why China's government has been urging people for more than a year to clean their plates.

The “clean plate” social awareness campaign is about several things, actually. There is a political dimension to it, linked with the Chinese government's anti-extravagance campaign that's aimed at cracking down on lavish — and wasteful — restaurant meals paid for by corrupt officials. Chinese President Xi Jinping has talked about his government's anti-corruption efforts as a top priority.

Of course, shady government officials are not the only ones wasting food. It is a widespread problem in China, with cultural dimensions.

Last summer, PRI's The World reporter Mary Kay Magistad caught up with two people in Beijing who helped to push the clean plate campaign into the public eye. One of them told Magistad that it's a question of saving face.

Chinese people can feel embarrassed about getting up from the table and leaving a completely empty plate, or asking their server for a doggie bag, because this might suggest that they don't have enough food to eat at home. You can see the effect of that at landfills, says Minter.

“If you've ever been to a Chinese landfill, and I've been to several, one of the striking things about them compared to American landfills is the amount of organic waste,” he says.

So has the government's clean plate campaign had much of an impact, so far?

Unfortunately, Minter says the answer is probably no. Initially, he says the effort got a lot of media attention. And it appeared that government officials were scared away from hosting frequent extravagant meals at restaurants.

But since early last year, Minter says, he suspects that food waste is increasing across the board in China.