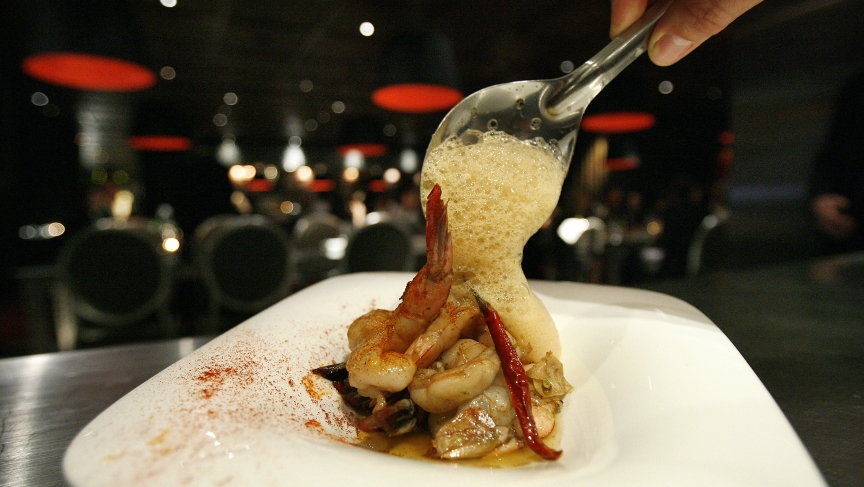 A sauteed shrimp with garlic ajillo and guindilla pepper plate is prepared at The Bazaar restaurant at the SLS Hotel in Beverly Hills, California.

Remember when shrimp was a luxury item? These days, it can seem as ubiquitous as chicken. One of the reasons is an explosion in shrimp farming in coastal areas around the world, especially in India and Southeast Asia.

The shrimp boom has been great for consumers and producers, but it is causing problems for people in out of the way places that farm shrimp, like Neendakara.

Neendakara is a typical south Indian coastal village. Chirping sparrows and cuckoos flit above placid lakes and coconut trees on the shore of the Arabian Sea.

But a closer look at the rustic setting reveals a harsh reality. Most of the homes here are crumbling.

Philomena, her husband and their two children live in a small brick home they bought16 years ago. For at least half that time, Philomena says, the plaster has been falling off the walls. She says they keep fixing them, and the cracks just keep re-appearing.

Below the plaster, the exposed red bricks appear to be turning to dust. To find the cause, all you have to do is rub your fingers on the wall and taste the powder that comes off.

The walls are covered in a thin layer of salt. And it’s coming from the nearby shrimp ponds.

The closest pond is about 100 yards away. It is five feet deep and brimming with shrimp larvae — part of an explosion in shrimp production in this area over the last 15 years to feed the booming global market.

That boom has created thousands of jobs in the region and made some here very rich. But the salty water from the ponds is slowly seeping into the ground and leaching into the buildings’ walls. It’s also making the soil too salty to grow most crops.

Critics argue that the benefit is not worth the cost. “That is not sustainable,” says V. Sreekumaran, a plant scientist at nearby Kerala Agricultural University.

But he says he has a solution to the salinity problem: rice.

Behind his office, Sreekumaran’s team is growing rice plants — each about three feet tall, with a little label. They’re cross-breeding some of India’s highest yielding rice varieties with a traditional, salt-tolerant type called Pokkali.

The researcher says Pokkali used to be widely cultivated around here, but that most farmers here haven’t grown rice in years. Farmers prefer to lease their land to shrimp farmers or developers, since that is a lot more profitable than cultivating rice.

He believes, though, that breeding new, higher-yield Pokkali varieties could help farmers shift back to what they used to do — raise the valuable shrimp, known here as prawns, for half the year, then drain the ponds and grow the salt-tolerant rice for the rest of the year.

“It is an integrated farming system,” Sreekumaran says. “One crop of rice followed by prawn crop.”

The beauty of the system, he says, is that while prawns need salty water, rice needs to be submerged in fresh water. This part of Kerala gets a lot of rain. So when farmers alternate shrimp with Pokkali rice, the ponds hold rainwater while the rice grows. That freshwater seeps into the ground, replenishes the aquifer and flushes some of the salt out of the soil.

Planting Pokkali here could have a broader benefit.

A mile or so from Philomena’s house, the Arabian Sea crashes into a seawall. With climate change, sea levels are slowly creeping up. Scientists expect that will speed up saltwater intrusion into coastal aquifers. Pokkali supporters hope a shift back toward rice-growing can help slow that process by increasing the flow of fresh water into the ground.

But to succeed, fans of the rice have to convince local farmers to start growing it again. And that means selling villagers on its benefits.

They hope to market Pokkali as a premium organic product to get higher prices for it, and to sell its ability to help fight the salt problem. The idea seems to be slowly taking root.

On a recent Sunday evening in Neendakara, a small group of Pokkali farmers distribute newly harvested rice to local residents near a church. Every family that worked in the field gets 10 kilograms, or 22 pounds.

One of them, Indira Kannan, says she can already see the benefits of planting Pokkali after just one year. “Before, we couldn’t grow any plants in our backyard because the soil was too salty,” she says. Now, some vegetables are taking root.

It will take more than a few activists to push the pendulum back against the highly-profitable shrimp industry here. Supporters say it will take government support to help pay for the benefits of the Pokkali system.

But farmer Indira Kannan says she, at least, is already sold. “We won’t agree to doing just prawn farming anymore,” she says. “We’ll be planting rice this year, as well.”

Editor's Note: The audio version of this story states that V. Sreekumaran is a scientist at Kerala University. The instutirion is actually Kerala Agricultural University.