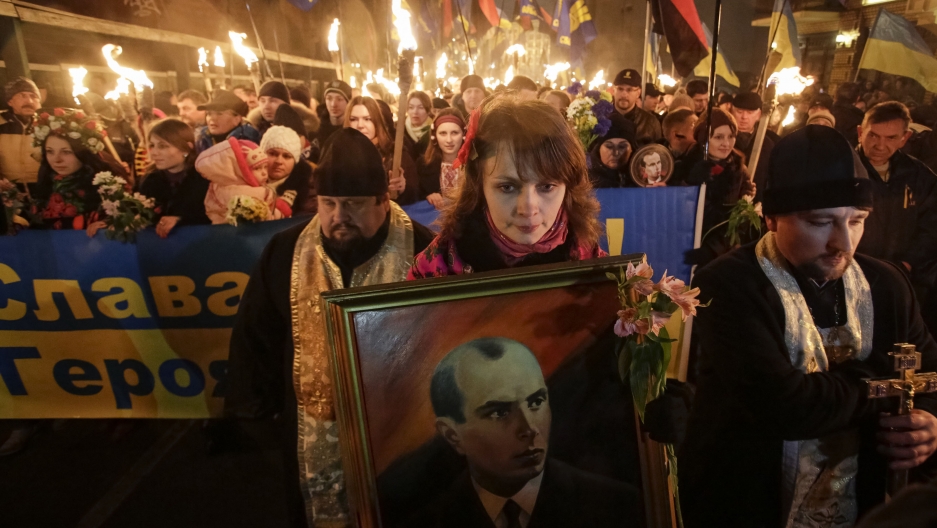 Activists of the Svoboda (Freedom) Ukrainian nationalist party hold torches as they take part in a rally to mark the 105th year since the birth of Stepan Bandera, one of the founders of the Organization of Ukrainian Nationalists (OUN), in Kiev. The portrait in the foreground is of Stepan Bandera.

You know the saying, "Sticks and stones may break my bones, but words will never hurt me?" Well, what if those words carry the weight of centuries behind them?

Reporter Igor Kossov was recently in the eastern Ukrainian city of Donetsk, hearing the insults that supporters of Ukraine's government and pro-Russian separatists were slinging at one another. He decided to write about the history of the insults for The Daily Beast.

“There’s a lot of bad blood going around where people dredge up the past, either deliberately or because they can't help themselves, and that’s really driving people apart,” he says.

That past is embedded in the language. One common slur that Kossov heard was the term khokhol, used to insult ethnic Ukrainians. The term refers to the traditional lock of hair worn by Cossacks during czarist times.

“Nowadays the word cossack is also used as a word, not to refer to the ethnic group, but to refer to army irregulars or 'deniable assets,'” says Kossov. “I’ve heard people say ‘Oh, the Cossacks are coming in across the Russian border.’ They mean that instigators and irregular forces are coming in to stir up trouble.”

On the flipside, says Kossov, Ukrainians sometimes refer to Russians in the pejorative sense as moscali or "muscovites."

This language goes back hundreds of years, according to Kossov. However, he heard one term with more recent origins — banderovtsi.  This was a term that pro-Russian separatists have used when referring to the government in Kiev.

Banderovtsi refers to the Ukrainian nationalist leader Stepan Bandera. Stepan Bandera was a very divisive ethnic Ukrainian politician in the lead-up to and during World War II.

"Bandera and many of his followers believed that they needed independence from the Soviet Union at any cost," says Kossov. “And the only people powerful enough to 'emancipate' them were Nazi Germany, which was really a military powerhouse.”

Bandera was one of the founders of the Organization of Ukrainian Nationalists. His party aided Nazi Germany during World War II.

People claim, says Kossov, that Bandera believed in racial purity, a pure race of Ukrainians with no Jews and Poles. His followers were responsible for the killing of Russians and for ethnically cleansing Poles and Jews. Some later united against Nazi Germany when they realized that the Nazis weren’t going to let them be independent.

Pro-Russian separatists look at the history of Bandera and Ukrainian anti-semitism, and at the participation of right-wing groups in the Maidan protests, and label the Kiev government as fascists. "The fact is there are neo-Nazi groups that are pro-Ukrainian independence," says Kossov. "They look very bad for the non-Nazis who are pro-Ukrainian independence, but they are there."

“Separatist people are saying, ‘Look at this, this is history all over again. We must fight back. We destroyed them 70 years ago. We can't let this happen again.'"

As a Russian-speaker born in Ukraine, Kossov is sensitive to the history behind the rhetoric. And he worries that English speakers are missing out on some of what has driven the tensions in the region.

“How many English speakers that are not from this area actually understand what this history means and what these words actually mean? These are not entirely empty accusations, they do have a past.” And the historical tensions threaten to tear apart modern-day Ukraine.