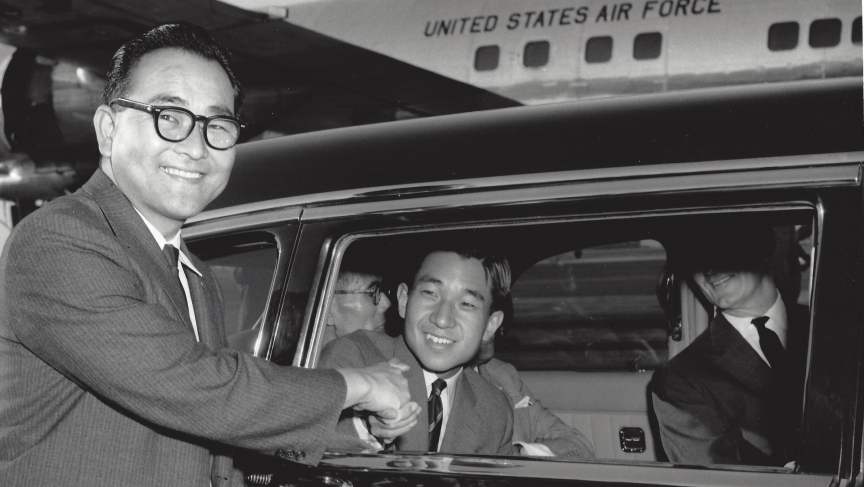 Bruce Kaji, shaking the hand of Japan's Crown Prince who had just landed in Los Angeles on a US Air Force airplane, in 1961. "In our family, we call this photo, The Prince and the Pauper.," says Bruce's son, Jon.

When Toyota announced plans last month to move its US headquarters from Southern California to Texas, the announcement caught a lot of people off guard — particularly in the city of Torrance, Toyota’s American home for the past 30 years.

Torrance is just 20 miles southwest of Los Angeles and is quintessential suburbia — the kind of place people move to when they're ready to raise their kids.

It’s long been overshadowed by its livelier neighbors, Manhattan Beach and Redondo Beach.

When I was growing up in Torrance, the biggest attraction was the mall. My friends and I used to call it “Borrance."

But what Torrance does have is a thriving Japanese-American community. The local Mitsuwa market is one of several Japanese grocery stores here that sell the latest imports from Tokyo. Across town, there are Japanese schools, Japanese hotels and banks — all of them catering to the second-largest Japanese community in the US (behind Honolulu).

“This area really became the interface between Japan and the US,” says Jon Kaji, a Torrance native. He’s a real estate developer who recruits Japanese companies.

He says the South Bay was home to a large Japanese population even before World War II. Many immigrant farmers moved here because it was one of few places in Southern California that leased land to non-US citizens.

But Kaji says Torrance didn’t become a magnet for major Japanese corporations until Toyota moved in.

Jon’s father, Bruce Kaji, was hired as Toyota’s first US-based accountant more than 60 years ago. As Bruce tells it, Toyota had a hard time at first.

“It was very difficult for them to overcome the image of post-war Japan trying to sell something to the United States,” he says.

But Bruce says Toyota gave Japanese Americans like him rare opportunities, at a time when many of them were still recovering from being forced into internment camps during the war.

“All of us who were interned at Minidoka, at Manzanar, we had no money. The government didn’t provide us with any money to reestablish ourselves. We came back with just bus fare,” Bruce says. “We were broke.”

When Toyota first arrived, it set up a small office and showroom in Hollywood, banking its success on the Toyopet Crown, a 4-door sedan that looked more like a British taxi than a sleek Japanese car.

Japanese commercials described the car as strong and reliable, but Bruce Kaji, who bought one of the cars, says it wasn’t.

“The motor on the Toyopet was not that strong. Once it got on the freeway, you could hear it going full blast. It was hitting the top cycles and not going fast, so I told the executives at Toyota, 'Kore wa abunai' — this is dangerous, you know?" Bruce laughs and admits that he wasn’t the one who drove it. His wife did.

The Toyopet never really took off in the US, and Toyota struggled to make sales. Bruce shows me a letter that Toyota’s treasurer once sent him, conceding defeat in the US market.

“It seems to me that Toyota has no hope or no future in the USA anymore, to my regret,” he reads from the letter.

Of course, Toyota’s fortunes did improve, and in 1982, the company moved to a 100-acre campus in Torrance.

Bruce says it was considered an ideal place — close to Long Beach port, where the cars were imported. The city was also a short drive to the airport. And there were a lot of bilingual Japanese Americans they could hire.

Other Japanese companies took note. Honda established its headquarters in Torrance a decade later, while Nissan moved into neighboring Gardena. Today, Jon Kaji says, the South Bay is home to the largest number of Japanese companies in the US.

“They’ve drawn all their part suppliers here, plus all their other support services — legal, advertising, accounting — and so that impact can’t be understated,” he says.

Kaji worries what Toyota’s move will mean for the Japanese community here. He says his phone hasn’t stopped ringing since the company announced plans to move its sales and marketing headquarters to Plano, Texas. The calls are from restaurant owners and hotels that rely on Japanese Toyota executives for business.

“They’re very worried,” he says. “They’re not quite sure how to adjust to this because it’s a major change in the entire sub-economy that exists in the South Bay.”

Jon Kaji has seen this before. In 2006, Nissan moved its US headquarters to Tennessee, taking 1,500 jobs with them. But more than half the employees left the company, opting to stay in the area.