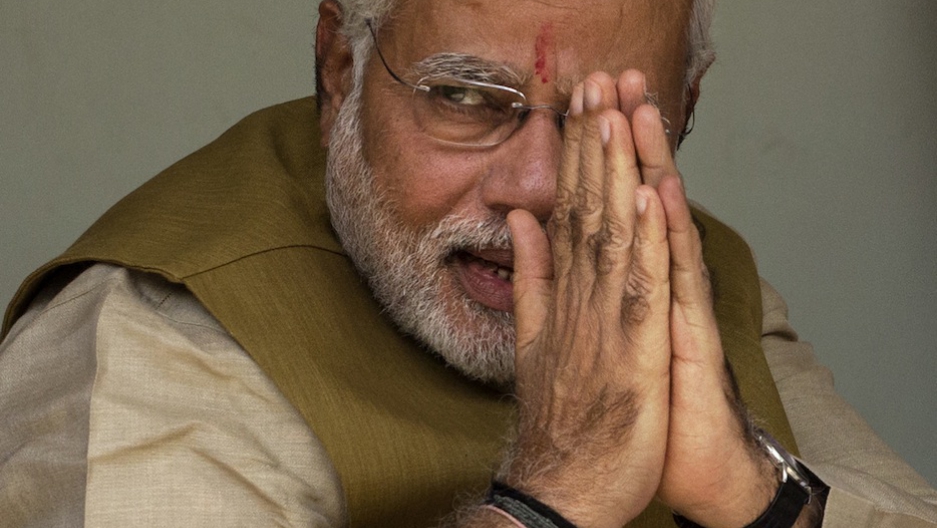 BJP leader Narendra Modi gestures to supporters in Ahmedabad, India on May 16, 2014 as initial vote tallies pointed to a landslide for Modi and his party.
Credit: Kevin Frayer
Share

The Hindu nationalist Bharatiya Janata Party (BJP), led by 63-year-old Narendra Modi, will take a commanding majority in India's parliament, cementing a meteoric rise at the expense of the incumbent Indian National Congress and leaders Sonia and Rahul Gandhi.

As vote tallies from across the country were announced Friday, it quickly became clear the BJP's performance would surpass even many optimistic predictions, winning the first outright parliamentary majority in 30 years. Modi won his seat in the holy Hindu city of Varanasi and the BJP was projected to win more seats in the state of Uttar Pradesh alone than the Congress Party did in the entire country.

World leaders placed congratulatory calls to Modi after Congress conceded what may be its worst-ever defeat, while the financial markets continued to show approval for Modi. In his victory speech from his home state of Gujarat, Modi frequently referred to himself in the third person.

"Today every voter became Narendra Modi,” said the man who proudly displayed his humble origins throughout the campaign, standing before a sea of supporters. He celebrated the fact that his administration will be the first born in post-independence India and called for national unity. "Modi can identify your problems wherever he may be. This is not the time to die for the country, it's the time to live."

Riding a dual wave of nationalistic pride and anti-incumbent disgust, Modi and his aides promised throughout his campaign to accelerate India's economic development using a model developed in Gujarat while toughening the country's stance on Pakistan and China, messages that resonated with a broad base of fervent supporters, many of whom have embraced a religious nationalism known as Hindutva, or Hindu nationalism.

Modi deftly incorporated Hindu values and symbolism into his campaign while steering largely clear of what opponents consider to be the dark side of Hindutva: a strong, anti-Muslim undercurrent that has for decades appealed especially to rural and uneducated Indians. Modi's singular popularity as a 'saffron' candidate raised concern among opponents of an authoritarian BJP government.

"They believe in the hegemony of a particular religion, which has never been practiced in this country,” said Mumbai-based human rights advocate Simpreet Singh in a GlobalPost Special Report titled "The Saffron Election" published last month.

In the same report, BJP leaders were not shy about characterizing Muslims as "aggressors in history." And Modi's closest aide, Amit Shah, has frequently made anti-Muslim comments and warned voters not to vote for Muslim candidates.

Friday's results represent a radical divergence from the previous election 2009, when Congress won a near-majority and its United Progressive Alliance sent Manhmohan Singh, a Sikh, into the prime minister's seat. Singh gained a reputation as as a quiet and ineffective, with the dynastic Gandhi family falling further out of touch with Indians as the country's economic growth slowed. In key districts in the capital of Delhi, for example, Congress candidates didn't even finish second to Hindu nationalist candidates, losing out to the upstart Aam Aadmi Party.

Twitter observers joked throughout Modi's acceptance speech that he was speaking more in his first appearance than Singh had during his entire prime ministership. Others shared much more sinister thoughts.

The "new era" brought about by the BJP victory raises questions about the treatment that Muslims and other religious minorities will be afforded, but also about India's relationship with the world. R. Nicholas Burns, professor at the Harvard Kennedy School of Government and former US diplomat, encouraged the US to "move fast to rebuild diplomatic ties" that have languished in recent years.

This election was the largest democratic event in history, marked not only by the Modi wave but also by an unprecedented level of "dark money," vote buying and "paid news." And all along, the specter of the 2002 riots in Gujarat which killed more than 1,000 on Modi's watch as chief minister has cast doubt about Modi's fitness to lead a diverse country with a substantial Muslim minority. Modi has not apologized for the deaths of hundreds of Muslims in the riots.

As scholar and author William Dalrymple wrote for the New Statesman, voters have made a conscious decision to prioritize the promise of future economic growth over past tragedies, whatever they may bode for Indian society.

"India is knowingly taking a terrific gamble on its future, in effect choosing to ignore Modi’s record on civil liberties and human rights in return for putting in place a strong and decisive leader who would be brave enough to make the difficult reforms and provide the firm governance and economic prosperity this country is craving," he wrote this week.

With the election of the BJP, it appears Modi is making larger global waves than his predecessors have in some time. Now the work of turning promises into policies begins.