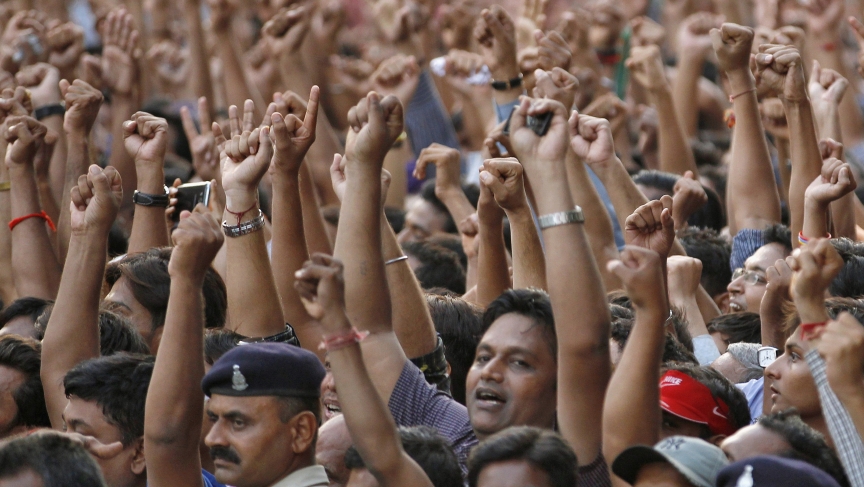 Supporters of Hindu nationalist Narendra Modi, the newly elected Prime Minister of India, raise their arms as he addresses a public meeting in Vadodara, in the western Indian state of Gujarat.

With more than two million people of Indian descent living in the US, it was inevitable that the country's five-week-long elections would become part of the American political dialogue.

And this was the first time that India allowed those living abroad to return and vote in the elections. About 12,000 non-resident Indians (NRIs) registered to vote. But it wasn't clear how many did vote, and whether they voted for the country's new prime minister, Narendra Modi.

Modi was the candidate in the country's Bharatiya Janata Party (BJP), which was recognized as one of most well-funded political parties in the election. Modi traveled around the country in a private helicopter during his campaign and, when he wasn't able to attend a political event, he appeared as a hologram.

Kalpana Sharma, a Mumbai-based Indian journalist and visiting professor at UC Berkeley Graduate School of Journalism, says the Indian community in the US was especially fragmented in their views of the election.

"The impression I get is that there are three distinct strands. If you speak to the faculty here at Berkeley, they would largely be liberal, and I think a little alarmed, at what has happened in India. I think nobody expected that [Modi's party] would come in with such a huge majority," she says.

"If you speak to the business community and possibly to the 'techies' in Silicon Valley, they have largely been Modi supporters and they have bought into his rhetoric about development and how he's going to transform India and make it business friendly."

Then, she says, there's a third group — the working class, like the taxi drivers in Berkeley, many of whom are from Punjab. "And the conversations I've had with them are very interesting because they are disillusioned with the Congress [Party], they don't like the party that rules Punjab and they certainly do not like Modi."

Sharma says this year's elections in India were very reminiscent of American-style elections.

"The way in which [the BJP] used the media and the way they spent that money is very close to the way things are done here in the United States and I think we will see more of this personality-driven politics in India than we've had before."

Even Modi's past hasn't impacted his reputation in the US or in India. In 2002, Modi was the chief minister of the state of Gujurat where three days of anti-Muslim violence took place.

"There is a very strong strand of people who are very critical of Modi," says Sharma. "There are people who have campaigned to keep Modi away from the United States, so the US government has denied him a visa all these years. But the business community and a large part of the NRI community feels like that's the past and he will change, and he has changed."

She doesn't believe people change their ideology so easily. "He has just camouflaged his other side and projected more this business-friendly, development side. But the true colors of Modi, I think, remain the same."

The White House has congratulated Modi on his win and says it hopes to work well with India's government. On the web, Modi's campaign team has set up a congratulatory "wall" where supporters can give their praise to the newly-elected prime minister.

US congratulates BJP on its victory in India’s historic election; we look forward to working w/ govt once formed to advance our partnership