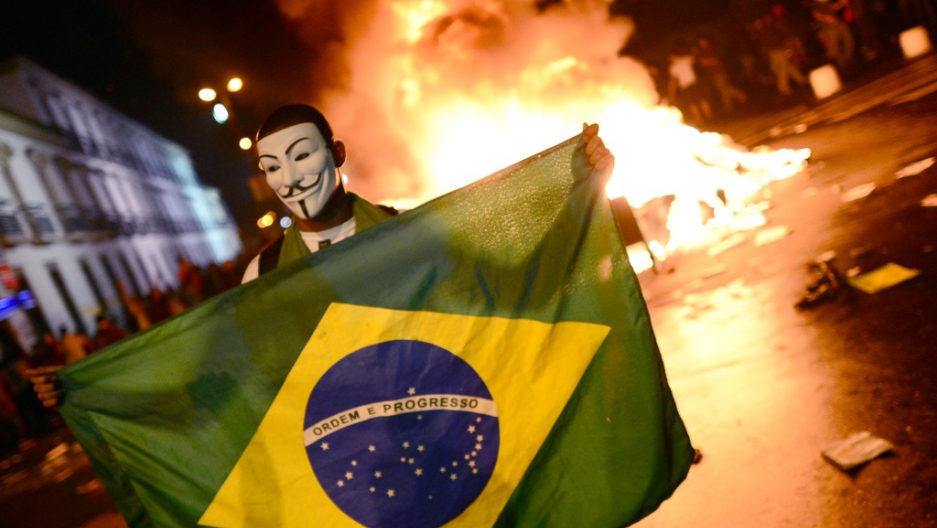 RIO DE JANEIRO, Brazil — When Brazil was awarded the 2014 soccer World Cup, it seemed a no-brainer that it would please the nation known as the most skilled and passionate in the world at “the beautiful game.”

Brazil’s love and mastery of the ball has won a record five World Cups, and it’s often described in religious terms, as “a mecca for football,” or simply the “pais do futebol” — "soccerland."

Past victories have been greeted with carnival-like celebrations from favela slums to exclusive beach resorts.

But as the June 12 inaugural game of Brazil vs. Croatia nears, thousands of protesters here are saying they are not only unhappy with the tournament but actually want Brazil’s team to lose miserably.

“I’d love to see the Brazil team lose every game and be thrown out in the first round,” says Marcelo Amorim, a university researcher who has been protesting against the tournament since last year.

“We already have five cups so what is one more? Right now there are more important things to worry about.”

Protester Wellington Magalhaes, a resident of a favela climbing up Rio’s hills, says he will be actively cheering for Brazil’s rivals.

Such antagonistic sentiments turned into confrontational demonstrations on Thursday, as thousands blocked the roads of Brazil’s biggest city, Sao Paulo, burning tires and shouting slogans against the World Cup.

The angers against the tournament and team stem from a mix of grievances both over the World Cup and within Brazilian society generally.

Many are enraged by the government spending some $11 billion on the tournament, while its schools and hospitals are in desperate need of repair.

Others are angered by the corporate nature of the games.

Brazil’s biggest stadium, the Maracana in Rio, has been effectively privatized, rented for 35 years to a consortium including one of Brazil’s richest men.

Meanwhile, police forcibly evicted a group of indigenous squatters near the ground to make room for development.

Soccer’s world governing body FIFA has also come under fire for its aggressive marketing demands. Brazil agreed to create zones around stadiums where only FIFA and its partners can sell goods.

“Football is a passion and a love for people in the favelas. But how does this cup help the poor?” Magalhaes asked. “The Brazilian government uses football as an opium to keep people happy. Well, we are tired of that.”

Perhaps his social commentary is not surprising. Even though millions have climbed out of poverty in recent years during successive left-leaning governments, Brazil still ranks among the world's most unequal countries. Many here doubt that souped-up stadiums for global soccer tourneys and the 2016 Olympics are a huge priority.

However, those wishing doom on Brazil’s team may be disappointed.

As home nation and with a talented generation of players, Brazil is the betting favorite to take the cup, with average odds of 3 to 1 — ahead of Argentina, Germany and reigning champ Spain.

But coach Luiz Felipe Scolari has already complained that protests could put players off, “big time.”

“If [protests] are normal, without smashing things up, then that is democracy. But I don't know if it's the right time,” Scholari said last month.

It is difficult to predict how big — or how aggressive — the demonstrations will be.

During the confederations soccer tournament last year, hundreds of thousands marched against spending for the country’s mega sporting events. At times, peaceful rallies have devolved into chaotic riots and brutal crackdowns.

But while demonstrators are organizing against the World Cup games in Rio de Janeiro and Sao Paulo, there is little sign of marches in the other 10 host cities.

The protesters also received some bad press coverage when a cameraman filming a rally in February was killed by a firecracker.

Still, protesters understand that with the eyes of the world on Brazil, even small disturbances could make a lot of noise.

A Sao Paulo member of a radical movement known as the Black Bloc said they aim to push through police barriers in the zones around the stadiums.

“They are going to try to get into the exclusion zones by any way, and there are going to be clashes,” said the Black Bloc affiliate, who would only identify himself by the alias A.M. because of the risk of arrest. “There is a clear objective. If they get into the zone, they have won.”

More from GlobalPost: Come for the World Cup, swim with the feces

Outside of the protest movement, feelings toward the cup are more mixed.

In a favela in Sao Paulo, laborer Higo Carvalho said he was critical of the World Cup spending but would cheer on the Brazil team.

“Despite the bad things in Brazil, I am still a patriot,” Carvalho said.

General enthusiasm for Brazil’s squad appears to be more muted than in recent years — with fewer people wearing T-shirts or painting the roads with the team colors.

However, some believe that once the party gets started, soccer mania will return.

“People here love to party and they love to be hosts,” said Matias de Padua, owner of a sportswear shop in downtown Rio.

“Once the games start, and people arrive from all over the world, and there is great football being played, people are going to put aside their problems. It is going to be a carnival. And Brazil is going to win the World Cup.”