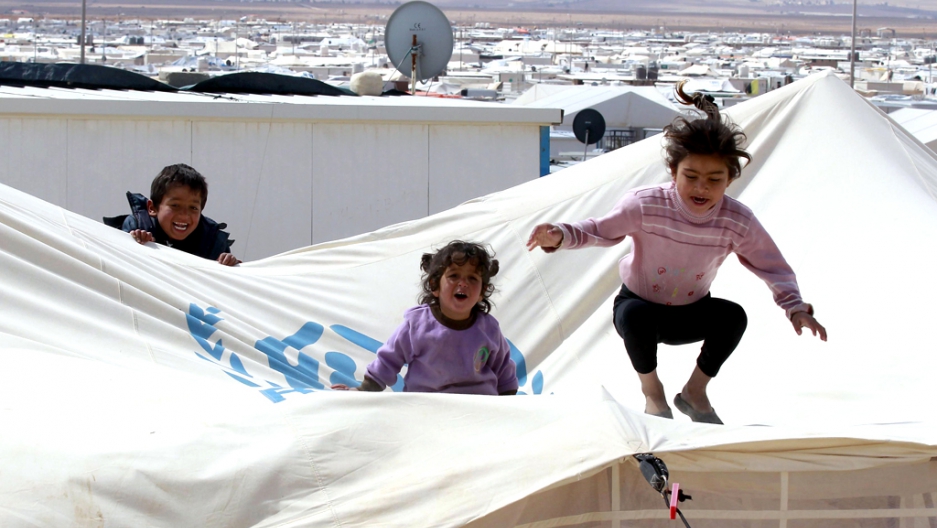 As disgruntled asylum seekers from around the world camp out in the city center — some of them on hunger strike — a group of artist-activists are trying to shame the German government into accepting more refugees from Syria’s civil war.

In an unusual public relations stunt launched this week, the Center for Political Beauty (ZPS) presented an ambitious proposal to foster 55,000 Syrian children in German homes for the duration of the conflict.

The scheme is a modern-day re-imagining of the famous “Children's Train” that enabled around 10,000 Jewish children to escape Nazi Germany and find homes in Britain right before World War II.

ZPS raised the stakes Monday by launching a mock government website introducing the program as if it were real.

Kurt Gutmann, who escaped the Holocaust thanks to the Children's Train, appears in an advertisement for the fake program, saying, “We would hardly notice 55,000 children seeking refuge in our country!”

On Wednesday afternoon, around 100 activists and unwitting supporters of the made-up scheme brought flowers to the Family Affairs Ministry to indicate they would be willing to take in Syrian children.

John Kurtz, a German war correspondent who works with ZPS under a pen name, said the group has already received 600 phone calls from people willing to foster children.

“That's in three days,” he added. “Imagine what would happen if the German government were behind it.”

The group also enlisted Syrian children from the city of Aleppo to appear in a video thanking Family Affairs Minister Manuela Schwesig. It was unveiled earlier this week. (Don’t worry. The kids were in on the scheme.)

On Thursday, the artists planned to set up an information center for would-be foster parents in central Berlin at the site of a memorial to the original Children’s Train.

And on Friday, they'll escort a group of Holocaust survivors who were saved by the 1938 rescue to the chancellor's office, group spokesman Philipp Ruch said.

“We're artists, they can refuse to talk to us,” he said. “But they cannot reject these people.”

The campaign highlights a growing debate in Germany.

Last year, the country saw requests from asylum seekers skyrocket 70 percent. But there are increasing calls to stem the tide.

Refugees and their advocates have been fighting official policies that prevent them from working and force them to live in designated cities — sometimes little more than tented forest encampments. The law that requires them to stay in designated areas while their claims are processed dates from 1982 and applies to all refugees.

For more than a year, refugees fed up with this system have set up camp in the Berlin neighborhood of Kreuzberg. More recently, they staged hunger strikes in tourist areas such as Alexanderplatz and the Brandenburg Gate.

Despite the tense atmosphere, the artists argue Germany can't keep wringing its hands over the daily violence in Syria and pretending there's nothing it can do.

“We really want to have a debate about whether the German government allows enough access for refugees or not," Ruch said. "This debate is now really heating up."

Some 5.5 million children have already been affected by the war — so the scheme would only help one out of 100, according to UNICEF. But it would be a massive — and massively unlikely — step considering that so far Germany has only taken in 5,000 Syrian refugees. It pledged to take in 5,000 more while an estimated 2 million Syrians have scattered throughout the Middle East.

“We want to force the government to say openly, 'No, we're not going to help.'” Kurtz said.