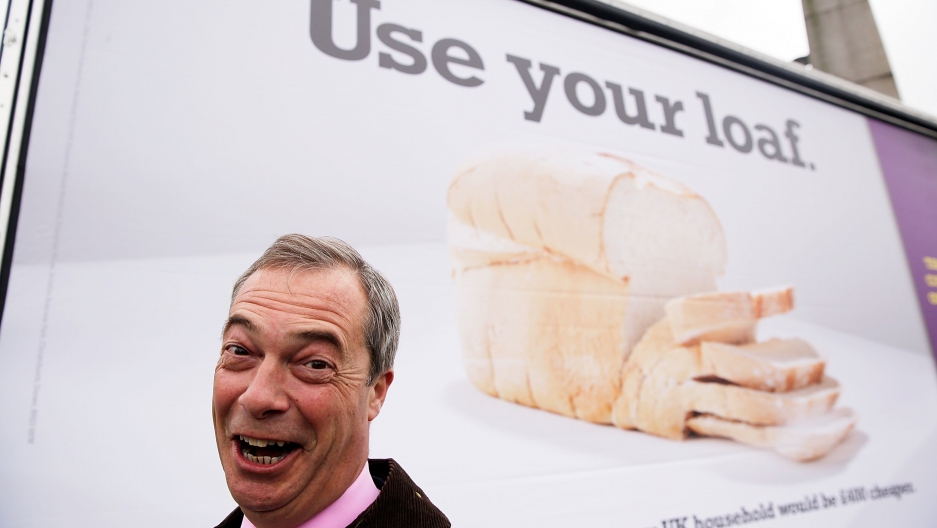 LONDON, UK — Not all voters were happy when campaign fliers for the anti-EU, anti-immigration UK Independence Party started arriving in their mailboxes in advance of next week’s elections to the European Parliament.

Some scrawled unprintable words before mailing them back to UKIP’s freepost address, the British equivalent of business reply mail. Others wrapped their fliers around bricks to run up UKIP’s postage expenses.

When some of those fliers started arriving smeared with blood and feces, Royal Mail drew the line and cancelled UKIP’s freepost account.

Meet the party poised to win on Thursday.

Pollsters predict that UKIP will take 24 of Britain’s 73 seats in Brussels, more than any other party. Its forecasted triumph would be the first time a major opposition party — in this case the Labour Party — lost a European election, and the first time a new party has won a nationwide election in a century.

The meteoric rise of UKIP and its charismatic leader Nigel Farage has bemused and bedeviled the UK’s political classes. Its lead highlights both the growing appeal of the onetime fringe party and the quirky character of European elections.

“Be careful about European elections,” says Nick Anstead of the London School of Economics. “They are very strange beasts.”

No matter how well UKIP performs next week, there’s virtually zero chance there will be a Prime Minister Farage after the country’s next general election in May 2015, or even of UKIP winning a single British parliamentary seat.

Like US primaries and mid-term elections, European elections draw a different kind of voter, typically more passionate about a particular party or issue than the average citizen.

Turnout is small — just under 35 percent in the last European election in 2009, compared to 65 percent for the general election a year later.

The vote’s structure gives small parties a better chance than in the general election, meaning it’s typically a time for protest parties to shine.

UKIP turned heads when it captured 17 percent of the vote in the 2009 European elections but just 3 percent in the general election the following year.

Now polling at around 14 percent of the popular vote, UKIP appears to have plucked voters from both Labour and the Conservatives. Support has ballooned in recent months despite a series of public gaffes that made even Farage admit “we’ve got some idiots.”

The party suspended local candidate Harry Perry after public proclamations that “Islam is evil,” homosexuality an “abomination before God” and David Cameron, a “gay-loving nutcase.”

Another candidate, William Henwood, resigned after tweeting that the British actor Lenny Henry should “emigrate to a black country.”

The party has also been caught in a few embarrassing slip-ups on its firm anti-immigrant stance. The actor portraying an unemployed British worker in one prominent UKIP ad turned out to be an Irish immigrant. And Farage has been criticized for hiring his wife — a German national — as his secretary.

Such headlines may not matter much to UKIP’s key demographics. The party polls well among older, white working-class men, who feel increasingly left out of mainstream politics, experts say.

Some 40 percent of working-class voters agree they have no say in government, more than at any other time in the last 25 years, according to Matthew Goodwin, a professor at the University of Nottingham who specializes in the UK’s far right.

He disputes the frequent charge that UKIP is a racist party. Farage’s success, he says, has been to inextricably link immigration and the European Union in the minds of voters who believe that both have cost them personally.

“These are voters who remember Britain before the days of the EU, before the days of mass migration, which they don’t really like,” says Tim Bale, a politics professor at Queen Mary University of London. “People are voting not with their pocketbooks, but their photo albums.”

More from GlobalPost: In Denmark, nothing says EU elections like group sex and random beheadings

In the wider world of European politics, not all far-right groups are created alike.

Farage has been quick to distance UKIP from Europe’s ultra-right nationalist parties, such as Greece’s Golden Dawn — whose representatives have publicly praised Adolf Hitler — and France’s National Front, which Farage has accused of having “anti-Semitism and general prejudice in its DNA.”

Many of those parties are expected to make a splash in next week’s elections, and Farage may have to tread delicate terrain to find alliances in Brussels.

For now, as UKIP looks forward to next week’s results, few can miss the party’s central irony: It’s best represented in a body it officially opposes. UKIP may hate the European Union, but for now, it needs it.

“Although UKIP is against Europe, Europe has been the making of UKIP,” says Patrick Dunleavy, a political science professor at the London School of Economics. “Without Europe, Nigel Farage would be nobody.”