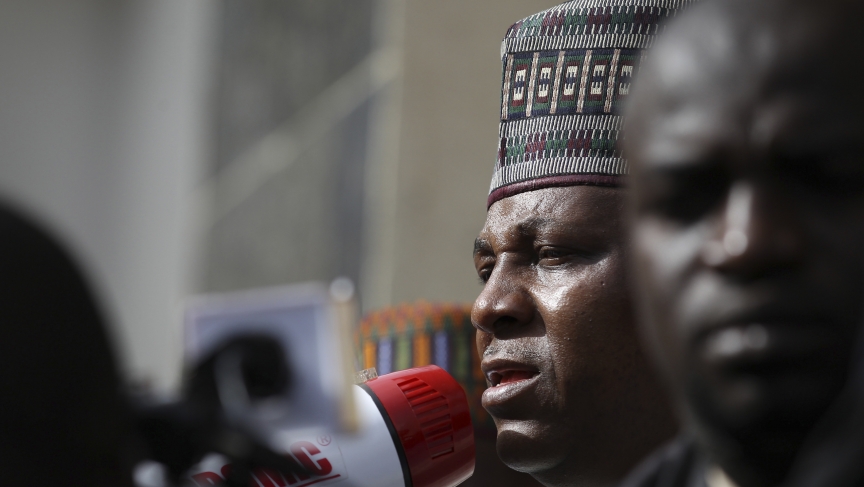 Kashim Shettima, the Governor of Borno state in northeast Nigeria, addresses a protest rally by Nigerians demanding the release of the school girls abducted from the remote village of Chibok. Thousands of Nigerian troops have been sent to the region, while the United States and Britain also have teams on the ground to help with the search.

The whole world is watching, including Michelle Obama. All 20 women US senators are even crowing that there's something they can finally agree on: The Nigerian girls must be found and rescued.

US Secretary of State John Kerry says his country will do "everything possible" to free the 276 girls kidnapped by the Nigerian militant group Boko Haram. But what can the United States do?

So far, there are 30 American advisers on the ground in Nigeria. They hail from the Pentagon, the FBI and the State Department with expertise in logistics, intelligence, and technology. American military planes are scouring the northeast corner of Nigeria to find the girls, or perhaps Boko Haram militants who might lead them to the girls.

And that's where things stand — and even that kind of help is being hindered by the limitations of the Nigerian military, according to Alice Friend, the Pentagon's principal director for African affairs.

Yesterday, testifying before the Senate Foreign Relations Committee, Friend didn't try to find a euphemism when referring to the Nigerian military: "We're now looking at a military force that's, quite frankly, becoming afraid to even engage."

The Obama Administration is also frustrated that Nigeria has not taken more constructive efforts to deal with the Boko Haram insurgency. Since 2010, more than 2,000 people have died, mostly at the hands of Boko Haram militants.

Nigerian President Goodluck Jonathan's response has been to declare a state of emergency in the area and send troops to quell the unrest. But those troops have alienated the local population, instead of engendering goodwill.

Some Nigerian soldiers are accused of human rights violations, including burning down homes, extra-judicial killings and detaining without charges the wives and daughters of suspected Boko Haram militants — a questionable parallel to what Boko Haram is accused of doing.

Those charges make the soldiers ineligible for training by the American advisers in Nigeria. The Leahy Amendment prohibits the State Department or Pentagon from providing military assistance to foreign soldiers when there's credible evidence that they've committed human rights abuses. It's named after its principal sponsor, Senator Patrick Leahy of Vermont.

Many international observers are also losing confidence in President Jonathan. He's from the south of the country, the Niger Delta, and has displayed a staggering disinterest in the kidnapping of the girls. It took him three weeks to speak out about it and he still hasn't visited Chibok, where the kidnappings took place. He cancelled a scheduled visit on May 16th, presumably over security issues.

Jonathan is attending a regional meeting in Paris on May 17 with officials from neighboring countries like Cameroon, Niger, Chad and Benin. The idea is to agree on a plan to firm up the borders with northeast Nigeria. The region is remote and awash in weapons, many of them from Libya. The weapons spilled out of the country after the fall of Colonel Muammar Gaddafi in 2011.

Boko Haram has used the neighboring remote regions of Chad, Niger and Cameroon to load up on those weapons. By tightening the borders, the Nigerian government could restrict Boko Haram.

But that's far from a concrete plan to rescue the girls.

Former US Ambassador to Nigeria John Campbell says there's even more to worry about. "There's real concern over the girls we didn't see in the video released by Boko Haram — which is roughly half of the girls known to be abducted by Boko Haram. Where are they? Have they been broken up into groups? There's no sense of where they are."

Campbell also points out that some of the girls in the video may not be from the school in Chibok. "Kidnapping in Nigeria by Boko Haram is ongoing in northeast NIgeria," he says. "Some of the girls we saw in that video may have been abducted from somewhere else."