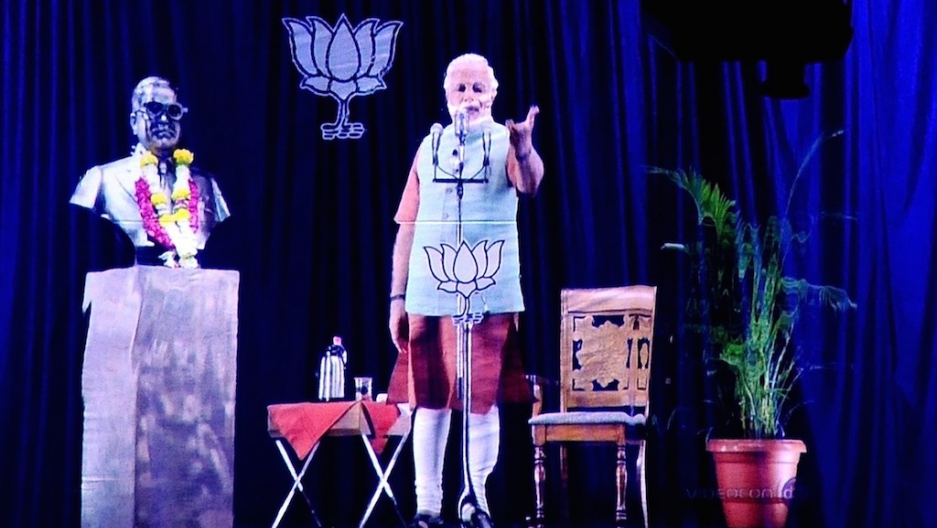 NEW DELHI, India — This may be a socially conservative country, but you wouldn't know that from the election that just ended, which was apparently all about booze, bribes and journalistic lies, all paid for by politicians.

In the five weeks that it took this sprawling country to vote, election officials seized 22.5 million liters of illegal alcohol, $52 million in cash and even 400,000 pounds of marijuana and heroin — all used to entice votes.

They are investigating a further 3,553 allegations that candidates paid newspapers and TV channels to give them positive coverage, a practice known as “paid news.” And more than 70,000 allegations of criminality known as First Information Reports (FIRs) have been lodged with police about candidates and parties.

Voting ended on Monday, and election results will be announced on May 16. According to the exit polls (which have a history of being wildly inaccurate), the Hindu nationalist candidate Narendra Modi could soon be India’s next prime minister.

Modi’s Bharatiya Janata Party (BJP) is predicted to fall shy of the 272 seats required for a majority, but would still be in a strong position to form a coalition with one or more regional parties. Voters are turning to the BJP after despairing at the current Congress-led government, which has become stagnant and mired in corruption allegations.

Modi himself was very well funded. He appeared in person at 437 rallies — and in dozens more including when he showed up as a holographic image. His footslog across India was assisted by a massive BJP advertising spend.

Some reports estimate the party spent $850 million on advertising alone. Others say the total by all parties was around $3 billion. Candidates are limited to spending $120,000, although parties are not subject to any controls.

A number of underhand tactics are used to woo voters.

At rallies and public meetings, party workers give gifts to voters. Over the years this has changed from blankets and material for saris (women’s garments) to laptops, according to veteran India correspondent Mark Tully, who began covering Indian elections for the BBC in 1977.

“The booze usually comes in plastic pouches,” he said. “Booze and money have been problems for a long time.”

Other methods include simply driving into a village and handing out cash from the back of a car.

The commission’s director general of expenditure, Prasana Dash, led an army of around 120,000 police and magistrates to monitor candidates. Of vital importance was a new network of village awareness groups: about 50,000 people keeping watch for signs of electoral corruption with access to a special hotline.

“We caught two fellows on a public transport bus with eight crore rupees ($1.3m) in cash,” Dash told GlobalPost. “The money was in big sacks on the roof of the bus. We had a tip-off.” The money weighed about 300 pounds; they probably couldn’t carry any more.

The Election Commission set up 11,123 “Flying Squads” of five people each including police officers and magistrates, armed with video cameras, to stalk candidates and deter them from illegal activities.

Static surveillance teams were set up to establish which voters might be vulnerable to bribery — “illiterate people, the labor class, slum dwellers,” according to Dash. The commission provided education programs, asked parents of schoolchildren to sign pledges, and conducted a large awareness campaign letting voters know they could face a year in prison for accepting a bribe.

Officers even set up observation posts outside the homes of candidates they suspected of trying to bribe voters.

How to buy an election

Ironically, there’s little indication that the widespread appetite for vote buying actually does candidates much good. Most voters insist they do not stay bought.

“A guy went to a BJP meeting in one of the elections I covered and was very angry with the speakers they had on the platform,” Tully said. “At the end of the meeting they gave him a plastic pouch of booze. He did what he said was the obvious thing: He drank the booze but voted for someone else.”

Milan Vaishnav, a political researcher at the Carnegie Endowment for International Peace, was told by a candidate in a state election last year that the money was not intended to buy votes. “If money is distributed, voters might give you a chance,” he told Vaishnav. “But if money is not distributed, you are finished.”

The worst states for paid news, vote buying and liquor seizures were Andhra Pradesh, Tamil Nadu and Karnataka, according to the Election Commission. Yet there are no dynastic dictators in those states — no Assads or Saddams who have bought and bullied their way to power.

The good news is that despite all the foul play, the election was actually an improvement over those held in previous decades. Beginning in 1990, Chief Election Commissioner Tirunallai Seshan instituted a series of reforms credited with cleaning up Indian politics over his six-year tenure.

Some political parties used to hire thugs to take over polling stations, a practice known as “booth capturing.”

“You can’t say anything in India is finished, but booth capturing is probably gone,” Tully told GlobalPost. “It was a particular problem in areas south of Delhi, where the Jat caste was particularly strong. Whole polling stations would be captured. If you weren’t a Jat, you couldn’t vote.”

But, according to Dash, this “muscle power” appears to have given way to a new form of corruption: “media power.” Tackling paid news is now a major part of the Election Commission’s job.

“It’s very difficult to say how much goes on,” he said. “We seized the accounts of a candidate in a state election last year. He spent a total of six crores (about $1 million). Out of this, the press, media and advertising payment was about 40 percent.”

The director general admitted it was very difficult to establish when journalists or proprietors had been paid to promote an editorial opinion. A strong sign might be the appearance of a story promoting a particular candidate in several newspapers, Dash said.

Does the apparently widespread attempt to interfere with the voting process mean the election results are likely to be invalid? Experts don't think so.

Dash described India’s elections as a “gold standard,” with the majority of MPs not spending illegal funds. Tully agreed. “The fact something goes wrong does not mean the election should be seen as invalid,” he said.

John Elliott, the author of "Implosion: India’s Tryst with Reality," has covered elections on the subcontinent since the 1980s. “You might hear of complaints that an individual candidate has got in without deserving to,” he said. “But no one says a government has won through vote-rigging.”

He believes there may have been an increase in corruption in India as a side effect of the economic liberalization which began in 1993. “The opening of the economy did two things. It opened up a huge area of government controlled resources like mining, telecoms, and so on which have gradually merged with the private sector. What it’s also done is increased greed for money at all levels. And that has increased the turnover of corruption.”

There remains another hurdle for India’s election officials to clear. Politicians try to bribe not only voters, but each other.

In 1993, 10 MPs from a minor party were accused of casting their votes in the Lok Sabha (India’s parliament) after receiving bribes. The case was thrown out because parliamentarians are protected from prosecution in the courts.

And the 2008 cash-for-votes scandal saw three BJP MPs wave bundles of cash during a Lok Sabha vote, claiming they had been paid by the Congress-led coalition.

If the electorate gives Modi a weaker mandate than he hoped for, then the temptation may come to spend more money.

And there’s nothing the Election Commission can do about that.