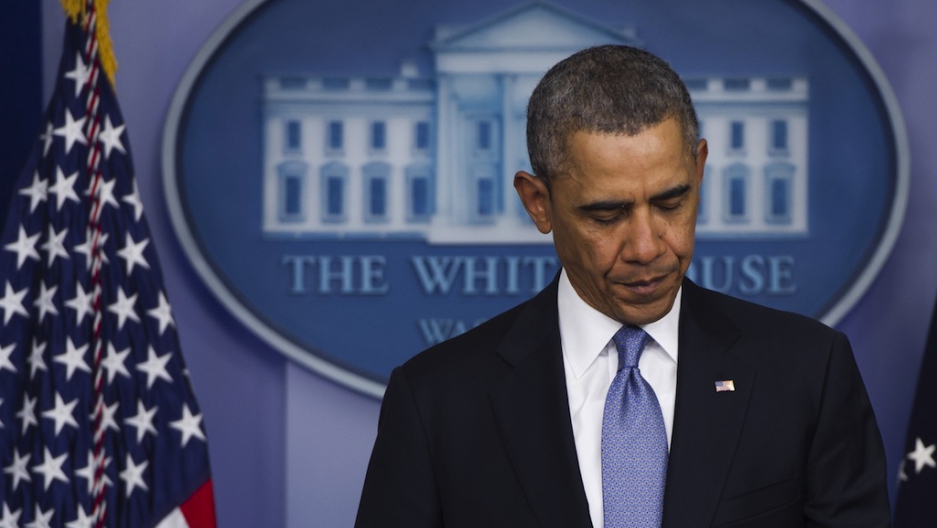 US President Barack Obama speaks about the situation in the Crimea region of Ukraine during a statement in the Brady Press Briefing Room of the White House in Washington, DC, March 17, 2014.
Credit: SAUL LOEB
Share

WASHINGTON — As journalists seek to understand the crisis in Ukraine and Putin’s next moves, they find themselves turning time and again to the same experts for insights and quotes.

In the media, these same talking heads have bemoaned the dearth of junior peers and dwindling resources available to educate them; the State Department recently cut Title VIII funding, which supported study of the former Soviet Union.

Longtime Russia scholar Angela Stent has written that “only a very brave or dedicated” doctoral student would become a Russia expert if he or she wants an academic job.

But these are symptoms, not the disease. The disease is a double whammy: a disregard for regional expertise and the disappearance of key rungs in the career ladder.

After the demise of the Soviet Union, the United States acted as though it no longer needed expertise on that region, and top talent drifted to the latest hot account. The abdication of interest in Russia, the attitude that “we solved that problem,” began at the very top of the policy establishment and trickled down to the businesses, government contractors, universities and think tanks that once employed Russia and Eastern Europe experts.

But student interest in the region is still there. As one professor at the University of Virginia memorably told us, demand for Russian language courses exponentially increases as Putin engages in dastardly deeds.

Sadly, however, demand for students with Russian-area skills is flat. One graduate student at Georgetown’s Center for Eurasian, Russian and East European Studies told us that there is a kind of “quiet desperation” about the chances of getting a job in the field. For those who do manage to find employment, the euphoria can be short-lived.

Consider our experience. We are graduates of prestigious international relations and area studies programs, we have lived in Ukraine and Russia and benefitted from Title VIII funding. After graduate school, we were among the lucky few that landed jobs at top think tanks and nongovernmental organizations. That’s where we hit a brick wall, because even where there’s a way in, there’s no way up.

Think tanks, once regarded as elite universities without students, employ research assistants and senior fellows, but there is a nearly unbridgeable gap between them. Even if research assistants are loyal to the institution, publish furiously and earn a PhD, only rarely will they become senior fellows. There are few mid-level research positions in Washington think tanks and therefore no ladder to climb and no opportunity for advancement.

The NGO sector offers an equally grim picture. Senior management has often been in place for more than 15 years and is indifferent to newcomers and resistant to change. The lack of turnover rarely invites new thinking, and writing analytic papers on the region for external audiences is often frowned upon.

So while there are entry-level and high-level jobs, there is nearly no opportunity for incremental career advancement working on the former Soviet Union in Washington today. The lack of mid-level positions affords few chances to develop analytic and leadership skills or regional expertise. One either makes coffee and schedules meetings or writes books and talks to Putin. Frustration at the paucity of opportunities for growth pushes many young experts out of the field.

Our argument is more than a millennial whine: The US government needs experienced experts on every region, and one cannot become an expert overnight. Hot accounts come and go, but the policy world—inside and outside of government— needs a deep bench of experts with real regional expertise and knowledge of local languages, the politics and players, and the intangibles that can only come from lifelong study.

The US government values smart generalists over specialists, and the US’s flatfooted response to the Ukraine crisis demonstrates the folly of this approach. Within the US Foreign Service, fluent Russian speakers are often sent to India or Latin America. In the intelligence community, the former Soviet Union is seen as a dusty backwater for old guys with beards, not a place where the upwardly mobile go to make their careers.

Incentives shape behavior. Few people will set out to become brave but poor doctoral students in Russian foreign policy if there are no prospects, and few talented analysts will bother to learn the grammatically complex Russian language for no payout.

The path forward is clear: Title VIII funding should be restored. Think tanks should establish career ladders. The government’s hiring and clearance process should be revamped so it does not weed out people who undertake travel abroad and establish foreign contacts that are necessary to forge real expertise. Funding for US NGOs should be contingent on regular staff turnover.

A dearth of regional talent has serious consequences. Without this expertise, the US will be caught unawares and outfoxed yet again.